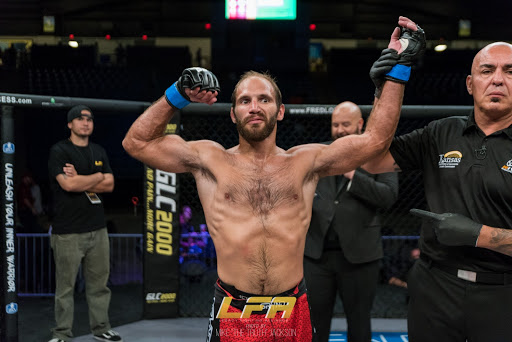 [Ed. Note — This feature originally appeared on Combat Press prior to the scheduled fight between Nick Browne and Arthur Estrázulas at Legacy Fighting Alliance 95. After its publication, the fight was rescheduled for LFA 97. The article has been lightly edited here to account for the change in events.]

One of the greatest qualities in a leader is to lead by example. It’s easy for someone to stand on a pulpit and preach about things they believe in, but it’s a whole new ballgame when it’s time to walk the walk.

Nick “Nyquil” Browne is a leader on many levels. The collegiate wrestler and All-American boxer has been an instructor at the All-American MMA Academy in Uniontown, Pa., for several years, and earned his black belt in Brazilian Jiu-Jitsu there in February. Around the same time he started his career as a pro fighter, he started working with kids outside the gym as well.

“I’m trying to give back to the community,” Browne told Combat Press. “I’m really tied to church. I’ve really dug into church for the last seven years. For the youth group, we try to take them places and stay safe and active through COVID, you know? It’s been a little challenge. We’re just trying to keep the ball rolling, and staying healthy has been a big priority.

“I’ve been helping them stay focused and leading them — showing them anything can happen with a strong will and determination. A few have come around the gym, but they have other sports they do as well. They will come around when they have time away from their other sports.”

Browne’s love of mentoring the next generation has had far-reaching effects, even into the world of MMA. In a recent Combat Press interview, up-and-coming fighter and Pennsylvania native Josh Fremd identified Browne as a longtime friend who is “like a big brother” to him. The two men used to train together before Fremd recently transitioned out to Colorado. The light heavyweight is now 6-1 as a pro with back-to-back finishes in the Legacy Fighting Alliance.

“It’s been awesome watching him come out of almost three years of not really doing anything,” Browne said of Fremd. “He just comes back and obliterates everybody in his path. His big thing coming up was that he was a little hesitant, you know? He wasn’t too explosive when he was just getting started. Now, he’s knocking people out, finishing them left and right.

“He’s got some killer skills and it makes him not very fun to spar with him. He’s a different animal.”

The 30-year-old Browne is on a three-fight winning streak of his own, with his last two wins also coming in the LFA cage. After a first-round tapout of Trey Ogden in September 2019, Browne was set for a lightweight title fight in early 2020. However, the injury bug struck and lockdowns started happening as a result of the coronavirus (COVID-19) pandemic. When he did return to the cage in July, he fought in the co-headliner right before the title fight he wished to be in.

At LFA 87, Browne faced Ben Egli, who was 12-3 coming into the match. Egli had the same record as Ogden did going into his fight with Browne, so it was back-to-back fights against more experienced opponents for the Pennsylvanian. For the first time in a few years, Browne went the distance, but he took the nod on all the judges’ scorecards.

“I wanted to prove my stand-up and everything,” Browne said. “I did that the first two rounds, and then I had kind of a dieting issue, and I wasn’t feeling hydrated. My next fight should prove that it was just a fluke with me getting tired in the third, and I’m always game for anything. Whenever you’re punching someone in the face, and they can just walk at you like it’s nothing, it’s kind of Plan B — take him to the ground and try to ground it out.

“I kind of hit my diet a little wrong and wasn’t doing things properly. I had the state of mind like everything would be fine, and then the third round came and I kind of gassed a little bit. We went back, and my manager went through and found some nutritionist and narrowed it down to what it should be.”

After Browne’s fight, the main event of LFA 87 followed with a battle between Bryce Logan and Jacob Rosales for the vacant lightweight title. After a five-round war, Logan picked up the victory. However, Logan was subsequently signed by Bellator MMA, where he competed last week. This vacated the LFA lightweight belt once again. Browne was granted the title bid he desired. Originally, he was slated to meet Arthur Estrázulas for the LFA gold in November at LFA 95. The fight fell through, however, due to the coronavirus and has since been rescheduled for LFA 97, which takes place on Friday, Jan. 15.

“I was definitely stoked,” Browne said of the booking. “If I continued to win for them, I knew they would have me fight for the belt.”

Estrázulas, who has been competing as a pro since 2010, trains out of Kings MMA in Huntington Beach, Calif. He is also currently on a two-fight winning streak in the LFA. Most of his recent wins have come by submission, but Browne has a wrestling background and also cross-trains at the Mat Factory in Burrell, Pa., which is a high-level grappling gym.

“He’s a black belt on the ground, and he’s got more subs than knockouts for finishes,” Browne said. “If I can keep it standing on the feet, I’ll get a nice knockout. Or, if he’s going to be particular and try to take it to the ground, then that’s just going to expose a lot of his game to a competitive black belt versus an in-house gym black belt. He’s either going to stand up and get knocked out, or he’s going to get taken to the ground and get submitted. We’ll see where this fight goes.”

Browne is a talented, lifelong combat-sports athlete with a 10-1 record going into the main event at LFA 97. He likes to lead by example, and what better example could he make than to win the LFA title and get in line for a shot at the UFC? His next battle will be a tough one, but that is what he expects as he climbs the ladder.

“This is just the beginning,” Browne said. “I’ve had 11 fights, and this will be the deciding factor. I always want to go out and fight the best.

“I’m going to prove the title is mine. The only way is up from here. I want to fight the best, and I believe the best are in the UFC. I want to win this belt and call out anybody in the UFC that wants a true challenge.”