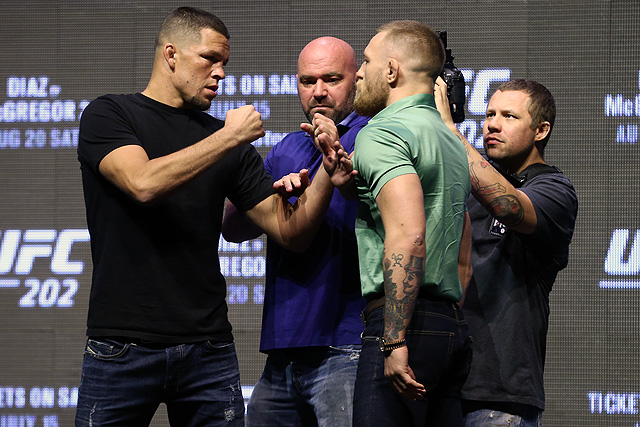 Just like boxing, MMA has always relied heavily on its promotional pitch to get viewers to tune in and get excited for an event or specific fight. One of its biggest tools is the press conference.

Before every single MMA event from the big organizations, there will be a pre-fight press conference where reporters and journalists have a chance to ask questions of the promoter and the fighters taking part in the event. Usually, the press conference takes place the day before the event.

Nowadays, the significance of a press conference has gotten so drastic that fans attend it, as if they were attending the actual fight. At one point last year, it became almost like a traveling circus, jumping from city to city, so fans from those regions could see the fighters live and the promotion could add more hype to the event.

Leading up to UFC 189, José Aldo, then the reigning featherweight champion, and Conor McGregor, the challenger who would ultimately take the belt from Aldo, infamously took to a world tour where they did 12 separate press conferences in 12 days, traveling from Rio de Janeiro, Brazil, to Dublin, Ireland. Some days even had multiple press conferences in one day.

It was quite the spectacle, but the UFC delivered in epic fashion. For those of you who need a reminder, it all culminated in complete madness in Dublin, especially when the Irishman reached over and grabbed Aldo’s title belt from him and held it up for his countrymen and women to go nuts over.

Of course, these press conferences are always interesting to watch. It’s fun to observe the psychological and physical state that the fighters are in before they are about to go to war. It’s fascinating. However, as much as I enjoy drama and some kind of confrontation taking place, I’d rather it not boil over into that.

That’s exactly what it has become as of late, though.

Unsurprisingly, the architect of those kind of crazy, entertaining press conferences is — you guessed it — Conor McGregor.

Yes, these press conferences can be entertaining, but that doesn’t necessarily mean it’s a good thing. The ways an MMA event, just like any sporting event, should get attention revolve around the fights, not all the hype and drama outside of the cage. But McGregor has created this new MMA paradigm where people will tune in because of how much he talks. While it ultimately does make the fight exciting to watch, it devalues the fight for what it is, which is two athletes testing their skills. Perhaps the idea of two guys fighting in a cage just isn’t enough to excite some people.

If I wanted drama and conflict, I would watch a reality show, where someone does or says something to get the “wow” factor. Then, I’ll have something to talk about with my friends the next day around the water cooler. Sure, it makes for good press, and the media covers it — some people would say that negative press isn’t exactly bad, right? — but is there a point where things can go too far?

Well, that happened in August 2014, when Jon Jones and Daniel Cormier got into a massive brawl after a press conference. The incident occurred right in the middle of the lobby at the MGM Grand Hotel and Casino, with fans standing around watching. The melee led to a hearing in front of the Nevada State Athletic Commission and a huge fine handed out to the champion. According to Jones, he even lost his Nike sponsorship, a statement which Jones himself later retracted.

Following the terrible incident, the UFC began conducting its press conferences with much more caution and added security.

In March 2016, McGregor and UFC 196 opponent Nate Diaz threw some of that caution to the wind when they had their own near brawl, which, as usual, occurred during the staredown after McGregor slapped Diaz’s hand away as he held it up in his face. UFC President Dana White was right there to break it up, but when Diaz’s entourage got involved, that’s when it got really crazy. Security had to separate and hold everybody back as the two fighters verbally jawed from a distance. Ultimately, there were no fines handed out for the incident, which is probably because minimal contact was involved, whereas the Jones/Cormier brawl was about as ugly as it can get physically.

As if the near brawl before UFC 196 wasn’t bad enough already, McGregor and Diaz had yet another confrontation at the UFC 202 pre-fight press conference. About 20 minutes in, McGregor was responding to a question about whether a third fight with Diaz would take place, and when the camera panned out, Diaz was gone. Apparently, he had decided to leave early (in response to McGregor arriving late), and did so by walking through the crowd. Diaz began to give the champion the middle finger, which got McGregor’s attention, and as Diaz and his entourage, including his brother Nick, yelled back and forth at McGregor, they threw a couple of water bottles his way, which led to the Irishman throwing bottles and Monster Energy cans at them in retaliation.

Once again, this was another press conference gone awry, and Dana White, who used to have a very good relationship with McGregor, seemed extremely upset at his behavior. He was already upset enough at the fact that the champion was late to the press conference.

I’m honestly not sure if these things are scripted or staged. I don’t like to get caught up in conspiracy theories, but it’s getting pretty ridiculous. The only thing I, and many others, can bank on is that the ego of McGregor has gotten to the point that it can’t really be controlled. He obviously puts on good fights and can back up his words, but sometimes what he does might turn off corporate sponsors from wanting to associate with a company with a figurehead who goes a little too over-the-top. It’s definitely true that money talks, but the reputation of a company, and the companies that sponsor it, are also put into consideration.

Even worse for the UFC is that, regardless of his antics, McGregor brings in a lot of money for the organization. He may not be the reason the UFC was recently sold for $4.2 billion, but there’s no way he didn’t have a big role in making the UFC more of an attraction to potential buyers, especially in recent times. His meteoric rise is something that we haven’t seen from a fighter in years, and it’s very fitting that the UFC was sold right at the peak of his popularity.

Ultimately, I’ll always be the type of fan that will want to tune into press conferences and enjoy them in all their glory, but a lot of times I will also be looking away from the potential train wreck I know is coming. Maybe that’s not the case for a lot of fans, but I value a good fight over all the trash talk.