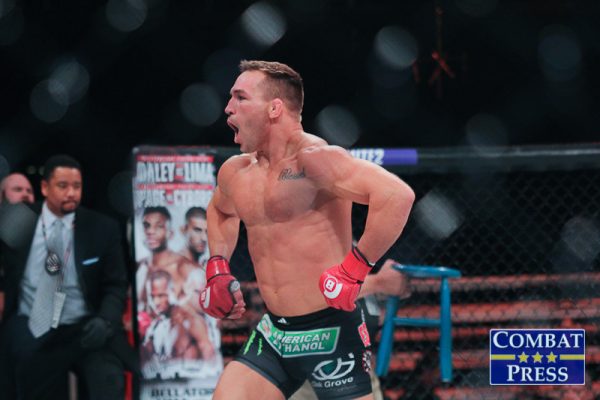 Bellator MMA heads back to U.S. soil for Bellator 197. The event takes place at The Family Arena in St. Charles, Mo., on Friday, April 13.

The card features Missouri’s own Michael Chandler. The former Bellator lightweight champion takes on promotional veteran Brandon Girtz in the evening’s headliner. Chandler was originally slated to fight for the title he lost to Brent Primus, but Primus was forced out with an injury and has been replaced by Girtz. This will be Chandler’s second fight since losing the belt to Primus. He beat Goiti Yamauchi by decision in January. Girtz won his last fight against Luka Jelčić to snap a three-fight skid.

The co-main event turns the spotlight on burgeoning prospect AJ McKee Jr. The budding star takes another step up the ladder to face UFC veteran Justin Lawrence. McKee has remained undefeated through his first 10 fights. He encountered a step up in competition against Brian Moore in his last fight, but he prevailed to score a third-round submission. Lawrence has found a groove over his past two fights and will look to end McKee’s hype train.

Also on tap for Bellator 197, we head to the welterweight division, where Joaquin Buckley takes on undefeated former NCAA Division I wrestler Logan Storley. At a catchweight of 160 pounds, Kevin “Baby Slice” Ferguson Jr. seeks his third victory when he goes up against Devon Brock.

The Bellator 197 preliminary card airs on Bellator.com at 7 p.m. ET. The main card airs live on the Paramount Network at 9 p.m. ET.

Instead of a lightweight title rematch with Brent Primus, Michael Chandler draws Brandon Girtz in the wake of a Primus injury. Is this a more competitive fight than the original match-up? Can Girtz upset Chandler and take his top-contender slot?

Girtz can absolutely upset Chandler. He has the knockout power to do so if Chandler sleeps on him. However, this isn’t a more competitive fight than what we would have seen if Chandler had faced Primus. Primus had won five straight going into his rematch with Chandler, including a victory over another top Bellator lightweight, Derek Anderson. Primus had been fighting really well and, despite the fact that some may feel he’s only a temporary champion until he fights Chandler again, he is the current titleholder for a reason.

Chandler wins either of these fights. The former Bellator lightweight champ has a great grappling background that he doesn’t use very often. Instead, he relies his power to secure the victory. Whether it be Girtz or Primus, he would look for the knockout and most likely get it.

Unless Will Brooks or Eddie Alvarez walks back through Bellator’s doors, Chandler is pretty firmly entrenched as one of the best fighters on the roster.

AJ McKee Jr. has already rolled through 10 opponents, but now he fights his most prominent opponent yet, UFC veteran Justin Lawrence. Will McKee continue to find success in this fight?

This is the perfect test for McKee right now. His last opponent, Brian Moore, was a solid veteran challenge, and now we get another step up in competition with Lawrence, a UFC vet.

Lawrence is on a good run following wins in his last two fights, including one just three months ago. He’s a flashy striker who can win fights on points by picking his opponent apart over three rounds. The 27-year-old also has some power — four of his last five victories came by knockout. One of those knockout victories was due to injury, though.

Lawrence has been a little inconsistent in Bellator. With his striking arsenal and background, he once had a lot of promise going into The Ultimate Fighter house in the UFC. In Bellator, it wasn’t until recently that he found some stability. Lawrence has failed in big fights against the better featherweights on Bellator’s roster, losing to both Emmanuel Sanchez and John Teixeira. His recent wins came against Treston Thomison and Andrew Natividad, both of whom represent a much lower level of competition.

McKee has indeed been steamrolling through his opponents. He has looked like the real deal over the course of his 10-fight career, and Bellator has done a fantastic job in bringing him up from a prospect to what he is now, something that is very rarely said in the development of Bellator’s young stars. McKee hasn’t been thrown to anybody out of his skill range or put into squash matches where it’s one-sided in his favor. This is a breath of fresh air.

Expect McKee to keep rolling against Lawrence. Lawrence isn’t a bad grappler, but McKee is so well rounded. Whether it be in the striking department or on the ground, Lawrence will have hard time keeping up with McKee.

Derek Anderson fights on the preliminary card, which seems absolutely criminal. He is one of the top fighters in the lightweight division and could easily make a run with a win against Zak Bucia, even if it is a catchweight fight.

Anderson has been rather inconsistent in his recent outings, but he has kept himself around the top by beating guys like Saad Awad and Patricky Freire. Anderson does hold a knockout victory over Brandon Girtz and has multiple other finishes, as well.