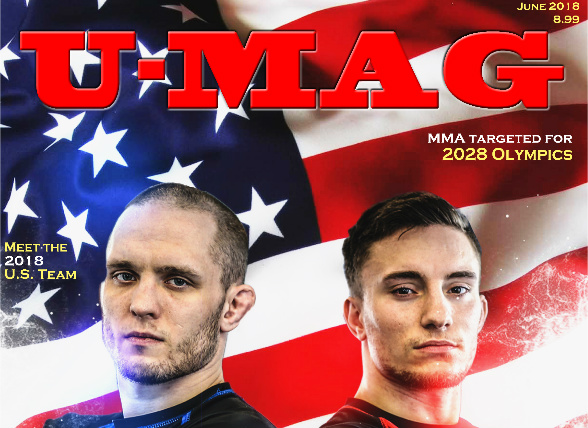 Olympic MMA is looking more likely now than ever before. U.S.-based fans will soon have a new way to keep up with the international amateur level of the sport, too.

“The primary purpose of [U-Mag] magazine is to gain funding for fighters,” U.S. national flyweight athlete Sean Stebbins told Combat Press. “I’m hoping that providing people with something they can hold in their hands will help people that choose to purchase the magazine realize that their contribution is important and it is helping someone on their road to greatness.”

The UFC-partnered International Mixed Martial Arts Federation (IMMAF) announced a merger with its perceived rival, the World Mixed Martial Arts Association (WMMAA), on April 10. According to an IMMAF update posted on May 18, the amalgamation process has begun.

Other factors to Olympic acceptance include having one governing body, hence the merger, and abiding by the World Anti-Doping Agency’s drug policy and various other criteria.

Stebbins and Romeo Orosco of the United States Mixed Martial Arts Kick International Federation (UMMAF) now look to be a resource to fans and fellow athletes keeping up with this ongoing process. The pair is about to launch the official team magazine, U-Mag, despite lacking formal journalism training.

“Neither one of us have ever developed a magazine before, so it’s been a learning process,” Stebbins admitted. “[Orosco’s] natural talent for promoting and marketing seems to work well with my ability to manage the project. We have been in constant communication with photographers, writers, graphic designers and UMMAF staff.”

Orosco, the driving force behind the idea according to Stebbins, was unavailable for comment. The pending magazine will be available both in print and online. Price of the print edition is undetermined as of yet.

“We will make the final call on pricing depending on the final cost of production,” said Stebbins. “We want it to be something people can afford, but will also raise money for the team to make it to Bahrain in November.”

There are 195 recognized countries in the world today. With the merger, IMMAF will have nearly a hundred member nations. Even just a hundred nations would mean that 51 percent of the world participates in what is essentially Olympic MMA.

Unlike some countries, the United States is not backed by a government or national Olympic committee. Just like Stebbins and Orosco are putting out this new magazine through their own investment in the product, Americans must be self-funded to compete.

“Competing overseas on your own dime becomes expensive quickly,” Stebbins explained. “It was around $3,000 for me to compete last year at the 2017 IMMAF World Championships. In a perfect world, the athletes on the U.S. team would be fully funded so they can focus on training. The intent of the magazine is to help reduce the financial strain international travel puts on amateur athletes.”

The first issue of the publication is due out next month. It will feature in-depth interviews with the 2018 national team and 2017 world medalists, a section on the Olympic recognition situation, a section on costs to compete, the 2018-19 UMMAF and IMMAF schedules, sponsor space and coverage of the 2019 national championships. The magazine is estimated to be around 20 pages in length and will be published either annually or semi-annually.

“It is starting to look more and more like a question of when Olympic recognition is granted rather than if,” Stebbins said.

The IMMAF currently expects to see MMA become an Olympic demonstration sport for the 2028 Summer Olympic Games in Los Angeles given California’s acceptance and established history in the combat art.

“The tournament style and multiple same-day weigh-ins scare plenty of people away, but the reward for the fighters that choose to show up and put it on the line is significant,” said Stebbins. “Most amateurs will never experience any type of international competition, which can make it difficult to determine their readiness for the professional ranks.”

The next IMMAF event, the 2018 African Open Championship, takes place from May 24-26 in Johannesburg, South Africa. For more information on the U.S. national team and international amateur developments, visit UMMAF.org and IMMAF.org.