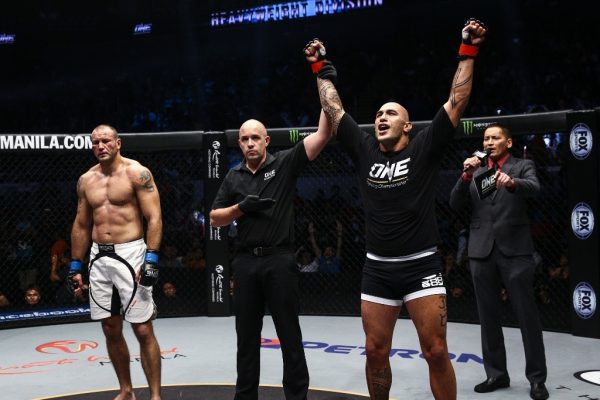 ONE Championship: ‘Spirit of Champions’ Preview and Predictions

ONE Championship returns to the Mall of Asia Arena in Manila on Dec. 11 for ONE Championship: Spirit of Champions. The nine-fight card from the Philippines features the inaugural heavyweight championship and many local fighters.

The heavyweight championship was originally slated to be the grudge match between GLORY veteran and former professional basketball player Chi Lewis-Parry and UFC veteran Brandon Vera. The bout was canceled, however, in what has become a confusing public-relations battle between the promotion and Lewis-Parry. Company president Victor Cui announced Lewis-Parry had failed to send in his medicals and drug test. Cui continued by accusing Lewis-Parry of not boarding his flight to Manila. Lewis-Parry has since spoken out against the promotion, stating that Cui and ONE Championship had falsely accused him of missing medicals he says were sent. Meanwhile, Vera responded to the news on his Facebook page, condemning Lewis-Parry for being pulled from the fight. The situation will become more clear when a Combat Press interview with Lewis-Parry is released in the coming days.

While the cancellation has left fans confused and wondering what is in store for the future of the promotion, the fight must go on, and so Taiwan’s Paul Cheng will make the last-minute trip to the Philippines. The heavyweight title is still up for grabs between Vera and Cheng, both of whom enter the clash undefeated inside the ONE cage.

In the evening’s co-main event, one of the Philippine’s most popular fighters, Mark “Mugen” Striegl, will return to the promotion to take on Australian bantamweight prospect Reece McLaren. Striegl was originally scheduled to fight undefeated 21-year-old prospect Jordan “Showtime” Lucas. McLaren takes the fight on just a week’s notice against one of the best prospects in Southeast Asia.

Local Filipino flyweight fighters Geje “Gravity” Eustaquio, Eugene Toquero and Ruel Catalan return to ONE Championship in their home country. Eustaquio looks to move his promotional record above the .500 mark when he takes on ONE Championship: Dynasty of Champions flyweight tournament runner-up Jianbing Yang. Toquero will attempt the same feat when he takes on ONE Championship Beijing flyweight tournament winner Li Wei Bin. The younger Catalan brother attempts to move his record in the right direction against Brazilian Evolve MMA fighter Alex “Little Rock” Silva.

Strikers clash in a women’s flyweight bout between former WBO world female super bantamweight champion Ana Julaton and Russian kickboxer Irina Mazepa. The fight was originally scheduled for ONE FC 19 in August 2014 before Mazepa was forced out of the fight due to injury. Mazepa made a splash in her promotional debut against Ann Osman at ONE Championship: Tigers of Asia. The multiple-time Wushu champion knocked out Osman in brutal fashion with a left hook followed by a series of undefended hammer fists to her unconscious foe. Mazepa’s knockout win set up this compelling match-up of strikers.

ONE Championship: Spirit of Champions will air live on ONEPPV at 6:30 a.m. ET on Friday, Dec. 11.

Brandon “The Truth” Vera is a 38-year-old American with family roots within the Philippines. He made a name for himself by fighting inside the UFC for just under eight years. Vera had highs and lows during his UFC career. He started out fast in his 2005 debut against Fabiano Scherner. The win was followed by three first-round stoppages in a row, capped off with a first-round knockout of former UFC heavyweight champion Frank Mir. Vera lost two consecutive fights at heavyweight to Tim Sylvia and current UFC heavyweight champion Fabricio Werdum before making the move to light heavyweight, where he put together a record of mixed results during his five-year stretch in the division. He jumped back to heavyweight in his last fight before leaving the promotion. Vera made his debut with ONE Championship in December 2014. He knocked out Ukrainian fighter Igor Subora with an expertly placed left straight and soccer kicks in the first round.

Paul Cheng is a 37-year-old Taiwanese heavyweight residing in Vancouver, B.C., Canada. Cheng is an actor and stuntman who had his work featured on movies such as Night at the Museum and War. The “Typhoon” began wrestling and playing football at Simon Fraser University, where he earned NAIA All-American status in his final year playing as a defensive lineman. Cheng was drafted by the British Columbia Lions during the Canadian Football League draft in 2002 before being dropped to the practice squad late in the season. Cheng spent time with the Calgary Stampeders and Montreal Alouettes in the CFL and the Colorado Crush in the Arena Football League. He signed a six-fight contract with ONE Championship in 2013 and made his debut with an impressive first-round submission over Cameroonian kickboxer Alain Ngalani at ONE FC 13 in December 2013. Cheng earned his fourth straight win and second win inside the circular cage when he defeated Mahmoud Hassan at ONE FC 18 in July 2014.

Both men will be making their first appearance inside the ONE Championship cage in over a year. While Vera will be dealing with the late change in opponent, he will have an easier time handling the 6-foot-3, 265-pound frame of Cheng than the much larger 6-foot-7 Chi Lewis-Parry. Cheng will be facing the difficult task of taking a fight on less than a week’s notice against a 13-year veteran.

Vera will have an advantage in every phase of combat. He has a steep edge on the feet and on the mat. Cheng is a tough fighter who fights with an iron will and unrelenting determination, but his warrior spirit will not be enough to stop the more diverse offensive attack of the formerly highly touted prospect. Vera will earn the 10th finish in his professional mixed martial arts career when he stops Cheng after two rounds of exciting, but dominant action.

Mark Striegl is a 27-year-old Filipino prospect who has spent time training in Japan and the Philippines. He is considered by many as the top bantamweight coming from the Southeast Asian region. He now trains with the Evolve MMA Fight Team in Singapore. Striegl has impressed in his young career by earning big wins under Asian promotions likes Pacific Xtreme Combat and Legend Fighting Championships. The Pinoy fighter has finished 12 of his 14 wins by way of submission, stopping 10 of his opponents in the very first round. Before making his ONE Championship debut in 2015, Striegl held impressive victories over PXC flyweight champion Crisanto Pitpitunge, Legend FC lightweight champion Yusuke Kawanago and ONE Championship prospect Ev Ting. His only loss came at the hands of former PXC featherweight champion Jang Yong Kim when he was caught in a third-round leg-scissor choke submission after a grueling back-and-forth title affair. Striegl impressed with a first-round rear-naked choke submission of the previously unbeaten Casey Suire at ONE Championship: Valor of Champions in April.

Reece McLaren is a 24-year-old Australian bantamweight training out of the Potential Unlimited Mixed Martial Arts gym on the Gold Coast. “Lightning” is the current Eternal MMA and XFC Australia bantamweight champion. He is considered to be one of the better bantamweight fighters in Australia. He has fought for titles in three separate promotions in the past 19 months. McLaren stopped Shantaram Maharaj with a second-round rear-naked choke at Eternal MMA 5 in 2014 to earn his first regional title. He tasted defeat in his next title challenge at Nitro MMA 12, where he lost a five-round decision to Ben “10” Nguyen, who has won twice to remain unbeaten since joining the UFC bantamweight division. The setback didn’t stop McLaren from earning his second regional promotion title at XFC Australia 23 in February. He choked Jacob Mahoney in under three minutes to earn the XFC bantamweight crown. McLaren last fought at Eternal MMA 10, where he defended his title against Edwin Arana with a first-round kimura submission.

Not only will McLaren be making his debut with the promotion, but he will be fighting on just a few weeks’ notice against quite possibly the best bantamweight in all of Asia. That title might be yet to be earned by Striegl, but what the young Filipino fighter has done in his career is cement himself as one of the most dangerous finishers in the division. Both men will be looking to finish this fight early, leading to the possibility of many exchanges on the mat and in transition. Expect Striegl to pull out the win after McLaren shows signs of the short-notice call, but what you shouldn’t expect is an easy fight for the 27-year-old. McLaren will be in this fight until the bitter end, which most likely comes in exciting fashion near the end of round one or early on in round two.