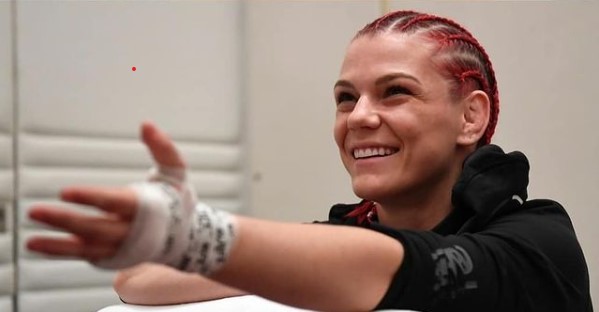 One to Watch: UFC on ESPN+ 42 – Gillian Robertson vs. Taila Santos

The UFC rounds off the calendar year with a loaded card for UFC on ESPN+ 42. Among the long list of fights at the show, the showdown between Gillian Robertson and Taila Santos could prove to be something of a hidden gem. The women’s flyweight fight features an interesting contrast of styles, with a predominant striker in Santos pitted against Robertson, a tenacious grappler. Moreover, the victor in this contest will likely soon find themselves at the upper end of the shallow women’s flyweight division.

Robertson appeared on The Ultimate Fighter 26 and was stopped in her quarterfinal bout by Barb Honchak. She was given a chance on the finale card, where she submitted fellow contestant Emily Whitmire in the first round. Robertson continued this form by upsetting Britain’s Molly McCann in her hometown with a second-round tap at UFC Fight Night 130 in Liverpool in 2018. Despite suffering losses to Mayra Bueno Silva and Maycee Barber through her next six appearances with the company, “The Savage” has collected a total of six UFC wins, including five by stoppage.

Robertson is currently riding a two-fight winning streak. The first of these triumphs came against Cortney Casey in June. Robertson dominated the first round with ground control from repeated early takedowns. Robertson continued to get the takedown in rounds two and three. However, she worked to force a submission in the final frame. With a minute left in the fight, Robertson took Casey’s back and slid in the rear-naked choke. Casey tapped, handing Robertson her fourth submission win in the Octagon.

In her last fight, “The Savage” faced Poliana Botelho. The opening round was hotly contested, with the Brazilian fighting off Robertson’s takedown attempts. Strikes were landed in both the clinch and at distance. Round two was a different story after Robertson got the fight to the ground from catching a Botelho body kick. Robertson moved from full guard to mount, where she ended the round by unleashing her ground-and-pound on Botelho. The third stanza was no different for the Brazilian, who was on her back within a minute after another Robertson takedown. Once again unleashing strikes from mount, Robertson forced Botelho to give up her back. Robertson was unable to finish the fight, but the judges nonetheless gave her the decision following the dominant display in rounds two and three.

Santos came into the UFC as an undefeated prospect who was signed from Dana White’s Contender Series. She lost a razor-close split decision in her debut against Mara Romero Borella at UFC on ESPN+ 2. Borella edged the second, whilst Santos won the final round. This left the first frame as the decider. One judge scored it for Santos, but the remaining two had it for Borella for her ground control at the end of the opening stanza.

In her next fight, Santos faced the aforementioned McCann at UFC on ESPN 13. The Brazilian landed clean, linear strikes throughout the contest. Toward the middle of the first round, she connected with a knee to the Brit’s body, which clearly got her attention. When McCann tried to clinch or initiate takedowns, Santos stung her with knees and elbows. A big takedown toward the end of the frame put Santos up early.

In the second round, McCann came out aggressively, looking to make up for dropping the first. Santos pushed her to the fence, though, and landed knees before again taking the fight down. From there, she transitioned to mount and also attempted a D’arce choke from side control. Santos clearly won the round.

With McCann’s energy fading as the third stanza began, Santos got a takedown two minutes in and worked strikes from side control. A dominant display led to a Santos win, with 30-27 scorecards across the board. It was her first UFC victory.

In the final UFC fight card of 2020, don’t sleep on this women’s flyweight contest. Both ladies are exciting, versatile fighters with finishing abilities. Robertson holds the record for most finishes by a UFC flyweight woman, whilst Santos has nine stoppages among her 16 victories.

This fight lines up as the second bout on the main card, and the victor could insert themselves into the title picture in the near future. This makes it one to watch.