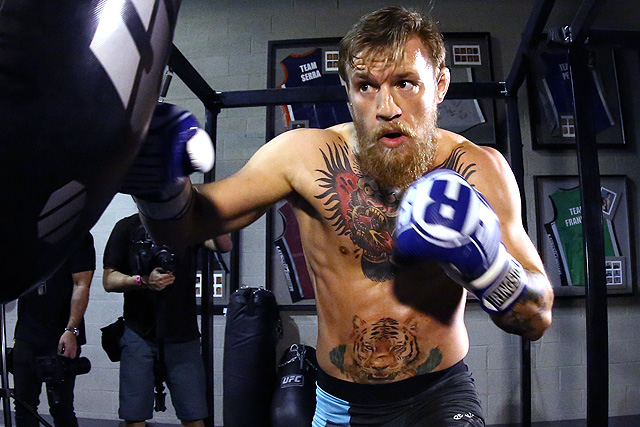 Let’s Face It: The Playing Field for UFC Fighters Tilts Toward Who Brings Big-Money Fights

Ever since the emergence of Conor McGregor in 2013, the UFC’s willingness to keep all of its fighters on an even playing field has been hampered by the company happily catering to its biggest rising star and letting anything that he says and does go, simply based on the likelihood that he will bring in more piles of money for the executives at the top.

I think most fighters would agree that if any one of them pulled the same stunt McGregor did, particularly when he refused to fulfill promotional duties for his upcoming fight (at the time) with Nate Diaz at UFC 200, and they were the headliner of that gigantic milestone event, UFC President Dana White would react a lot differently than simply pulling the fighter from the card and then letting the whole thing go for the most part. Oddly enough, White was so unfazed by McGregor’s tardiness that he spent the majority of the press conference for UFC 200 addressing McGregor’s absence with a lot of smiling and laughter, not anger or yelling. He didn’t have a single negative thing to say about what the Irishman did, other than reiterating that he needs to show up for the promotional side of the UFC’s events. But White was so laid back about the whole matter that it was almost awkward.

Earlier this month, I penned an article talking about whether McGregor is better at training for a fight or promoting it, simply because he seems to deliver so well on both fronts, but definitely has more of a knack for the latter, especially with his outspoken demeanor and enjoyment in his role as his own hype man. So, would it be shocking for anybody to suggest that the reason McGregor isn’t, for instance, being stripped of his belt and suspended, is because he brings in so much big revenue for the UFC? I mean, when you’re an exciting fighter and you deliver for the fans, as well as your employer, you’re bound to become their favorite employee, right?

That’s always been the case with McGregor. But usually if you end up making your bosses angry by attacking the product they put out and mocking past events they have done, you probably won’t be too high on their list of favorite people.

Unfortunately, that standard doesn’t seem to apply for someone like McGregor. He can do those things and you won’t hear a peep from the UFC execs. He’s making big piles of money roll in for the company, and since he’s making people come out to watch the product, the implication is that the UFC better treat him nicely so he doesn’t go somewhere else.

Hell, McGregor even did something that is definitely frowned upon in the fight game. He slapped the hand of Nate Diaz as they were squaring off after their UFC 196 press conference, which nearly led to a disastrous brawl right on the stage. The last time something like that happened was when Daniel Cormier and Jon Jones — who have actually been named the new main event at UFC 200 — got into a massive brawl while squaring off in the lobby of the MGM Grand when promoting their upcoming title fight. The incident occurred on Aug. 4, 2014, and led to a hearing with the Nevada State Athletic Commission where both Cormier and Jones gave their side of the story. They were subsequently fined and required to do community service, but they were not suspended. Jones did, however, lose his sponsorship with Nike — this was pre-Reebok/UFC — so it obviously hurt his personal reputation more than it hurt him financially.

Now, of course, the incident that happened between Diaz and McGregor was nothing like what happened between Cormier and Jones, but the latter incident was a reaction of Cormier (pushing) to an action of Jones (putting his head up against Cormier’s head). It wasn’t like they both went in there to fight. It just happened spontaneously. McGregor, on the other hand, knew what he was doing when he slapped Diaz’s hand. He made contact with Diaz when he knows he shouldn’t be doing it. So why didn’t he have to go to an NSAC hearing or get a really harsh pep talk from UFC execs? Is it because he’s making “Uncle Dana” and “Uncle Lorenzo,” as McGregor playfully calls White and UFC owner Lorenzo Fertitta, a lot of money? Is this why he gets away with certain things? One can make that case.

It should be noted that the UFC obviously gets credit for removing McGregor from the UFC 200 card and basically teaching him the lesson he deserves. But if it was anybody else, there’s no way the change would have been that simple and smooth. Nor would the head of the company, who’s known as a hothead, be so calm about it.

Another great example of when a different standard was used, where it resulted in an angry reaction from White, was when the aforementioned Jones was set to face longtime MMA legend Dan Henderson for the UFC’s light heavyweight championship at UFC 151 in September 2012. Unfortunately, Henderson ended up getting injured and had to pull out, so the UFC quickly looked for a replacement and chose middleweight contender Chael Sonnen to fight Jones on eight days’ notice. What happened next seemed to create a lot of tension between Jones and the UFC for a long time, because when the champ was offered the fight, he actually refused to fight Sonnen on short notice. He said he felt he didn’t have enough time to adequately prepare for such a challenge, which was apparently based on advice from his own camp, so he ultimately turned down the fight.

Not only did this anger White, but it forced him to cancel a planned UFC event for the first time in the company’s history. Shortly thereafter, White held an emergency press conference over the phone, answering questions from the media about the events that took place and led to the cancellation, while trashing Jones and his camp for everything that had transpired.

Where was this anger when McGregor randomly decided to declare his retirement because he didn’t want to do some simple promotional spots? It’s not like McGregor didn’t know the fight was going to happen and that it just crept up on him at the last second. In fact, he demanded the rematch with Diaz, then later got out of it like a scalded dog that couldn’t handle the pressure.

UFC 200 is no small event. It’s a landmark show that is supposed to be part of a huge weekend of events in the middle of the summer, where other big championship fights are being held on back-to-back-to-back nights. It’s safe to say that UFC 151 was not the same thing at all, but the reaction to its cancellation by the president of the UFC was much different than his reaction to his biggest star deciding to retire.

Furthermore, the reason Jones gave at the time for not wanting to fight Sonnen, stating that eight days was too short to prepare for such a big fight, was a lot more understanding than a fighter suddenly not wanting to show up to do promotional duties. Again, the reaction was much different, when it shouldn’t have been.

Again, the standards for what some fighters (in this case, McGregor) are allowed when they fight back against the system, and the condemnation they receive, is night and day to what has taken place in the past with aforementioned cases, like the ones involving Jones and Cormier or Jones and UFC 151, being treated much more harshly because of only reasons we can speculate.

The UFC should hold every single fighter to the same standard and not give anybody special treatment, regardless of how much money they bring the company or how well they fight. Sure, making profit for the company and taking fights when you’ve been asked in the past are big things, but they shouldn’t affect present or future matters. If the UFC allows this to happen, then the company lets its fighters get away with things that fighters in the past couldn’t get away with. In other words, the UFC would simply create a double standard. Nobody should be allowed to defy their bosses, but if they do, they should all get the same punishment. Period.