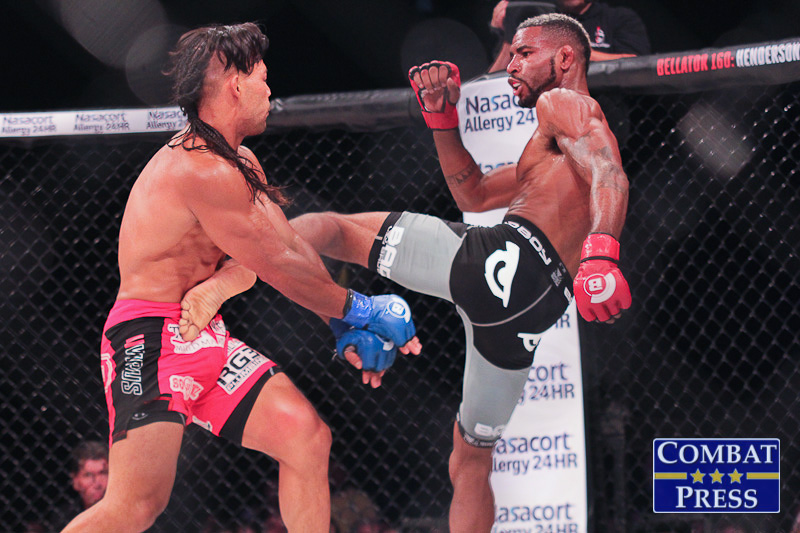 The Bellator Featherweight Grand Prix is finally close to reaching a crescendo, as the two semifinals of the tournament have surfaced. Current champion Patricio “Pitbull” Freire dismantled Pedro Carvalho at Bellator 252 last week with a knockout win in just over two minutes of cage time to line up his next dance partner in Emmanuel Sanchez. Now, at Bellator 253, Darrion Caldwell and A.J. McKee Jr. compete on the other side of the bracket. The victor will secure a place in the finals and a title shot.

In the wake of being outclassed on back-to-back occasions by Kyoji Horiguchi for the Bellator and Rizin bantamweight belts for the second and third losses of his career, Caldwell has been determined to capture gold again. This time, his hunt for a title comes one weight class higher at featherweight, which is a testament to his confidence in his ability to succeed in a division that has a deeper talent pool. To get to where he finds himself today, Caldwell notched an impressive unanimous-decision win over Henry Corrales in the opening round of the tournament and then added a rear-naked choke for a first-round submission of Ádám Borics, who was undefeated through 14 fights at the time, in the quarterfinals.

Caldwell’s upcoming opponent has yet to have experienced the bitter taste of defeat in his professional career. Much like NBA legend Dirk Nowitzki, who spent his entire 20-year career with the Dallas Mavericks, McKee has only ever known the Bellator cage as a pro. He made his debut against Marcos Bonilla at Bellator 136 in 2015 to hit the ground running and now sits undefeated at 16-0. McKee has still not let go of the gas pedal. He has never been accused of having a padded record, either. Four of his first five fights ended in the first round, which had people wondering if he can hold up in longer fights. Indeed, he has proven he can with decision wins over Blair Tugman, Justin Lawrence and, most recently in 2019, Pat Curran.

Bellator 253 will continue the trend of the promotion calling the friendly confines of the Mohegan Sun Arena in Uncasville, Conn., home on Thursday, Nov. 19. The 7 p.m. ET main card will be televised on the CBS Sports Network and streamed on DAZN, while the preceding 5 p.m. ET prelims can be seen on DAZN and Bellator MMA’s YouTube channel.

Despite a step up in competition in his recent bouts, A.J. McKee Jr. has actually upped his finishing percentage while remaining undefeated. Will he add another finish to his resume when he meets Darrion Caldwell in the featherweight grand prix’s semifinal round?

On paper, this match-up between Caldwell and McKee appears very even. Both men enjoy grinding up their opponents by pushing the pace, which is served well by their wrestling cornerstone. Both of them are unorthodox fighters in the sense that they are both southpaws.

It makes sense on Caldwell’s end how unpredictable he is thanks to his time spent as the training partner of former UFC bantamweight champion Dominick Cruz. Yet, McKee can execute abnormal sequences like he did against Brandon Phillips four years ago by throwing side kicks with no setups. So, the person that will get their hand raised is going to be the one that is more aggressive and acts first.

McKee is a notoriously fast starter. If the fight goes the fully allotted distance, then you always receive the vibe that he was calm and not tentative. When he squared up against Cody Walker at Bellator 160 in 2016, he was able to take an opponent who was three inches taller to the ground and put him in a state of worry by being able to flatten him out, which eventually led to McKee landing knees and punches from side control. McKee sealed the deal with a modified guillotine choke just 30 seconds into the second round.

If this fight happened four years earlier, then Caldwell might have been a favorite to win because of McKee’s tendency of overextending himself to get into striking distance and heavily depending on his speed to bail him out of those situations. That was clearly in play when he fought Ray Wood at Bellator 166 and got caught with a knee while he was shooting down for the takedown in the first five minutes. McKee fixed this problem two fights later against Blair Tugman in a fight he won via unanimous decision, and it has not been an issue since.

Now, the more glaring Achilles’ heel that tends to rear its ugly head is when Caldwell becomes hyperfocused on chomping down on his mouthpiece and scoring a takedown. It is during these overcommitments that he leaves himself susceptible to a submission via guillotine choke. That’s how his fights have ended on numerous occasions, but most notably in his first meeting with Horiguchi in Japan for RIZIN.14 and in the first of the two fights he had against Joe Taimanglo. In the second fight against Taimanglo at Bellator 167, Caldwell almost got submitted again with the same technique.

Jackson has a very small chance of getting a win against Henderson. This is not due to a lack in ability for Jackson, but rather due to Henderson’s wealth of experience fighting against ranked opponents in the UFC and marquee names in Bellator like Michael Chandler and Patricky “Pitbull” Freire. As a result of the deterioration of his speed due to his age and the damage he took throughout his career, Henderson may not have defeated the top-tier guys in Bellator. However, he seems to do well against fighters that don’t have as much name recognition as Henderson himself does. This match-up is one intended to allow for Henderson to gain confidence and perhaps build a winning streak that would surpass his current Bellator best of two consecutive victories, even if it doesn’t lead to him matching his lifetime best of 10 when he was in the midst of his WEC days.

With the exception of Colby Covington, whom Jackson fought in his second professional bout while at Fight Time promotions, Henderson is easily the most accomplished fighter that the Sanford MMA product has ever faced. It helps that Jackson fought earlier this year in July against Jordan Mein at Bellator 242. That allowed him to get used to the oddity of a quiet arena, but he’s still going to have a lot of things to think about.

Especially with Henderson fresh off a knockout loss against Michael Chandler at Bellator 243 and being in the corner of his MMA Lab teammates like he was for Jared Cannonier’s unanimous-decision loss to former middleweight champion Robert Whittaker at UFC 254, he’s more than capable and hungry to get back into the rhythm of winning.

There are a couple of contenders for this honor in Bellator 253’s lineup. Julia Budd’s stepson, 25-year-old Lance Gibson Jr., is on this card against U.S. Marine and MMA veteran Shane Cruchten. This bout was originally booked for Bellator 244 earlier this year, but it was then shifted to Thursday’s event. This will be Gibson’s second fight under the Bellator banner after making his promotional debut a year ago when he spent less than two minutes in the cage en route to a TKO win with strikes from back mount over Dominic Jones. What makes Gibson so intriguing is his background in pankration.

The one to look for, however, features Jay Jay Wilson, who could be at the forefront of the next pack of stars in the sport. Wilson, who was born and raised in New Zealand, has a professional record of 6-0 in which five of his wins have been through knockout or submission. Four of those stoppages came in the first round. Wilson is only 23 years old and already possesses a gnarly Brazilian Jiu-Jitsu game as a brown belt. He exemplifies the idea to “focus on what you have instead of what you don’t have” through his efficiency in using the entire cage as an advantage. Much like a snake cornering its meal, Wilson likes to set up his offense and traps along the cage while knowing full well that it restricts his opponent’s movements.

Wilson’s most recent fight was against Ty-wan Claxton at Bellator 242. It proved to be the longest professional fight for Wilson and the first time he went to the judges’ scorecards. The Claxton bout was a reminder that Wilson is still in the early stages of his development, though, especially in his stand-up game. However, he did demonstrate good timing and fight instinct by throwing flying knees everytime Claxton tried to close the distance.

Wilson’s opponent on Thursday will be Sergio De Bari of Silver Fox BJJ. De Bari is hoping to extend his current winning streak to five as he makes his Bellator debut