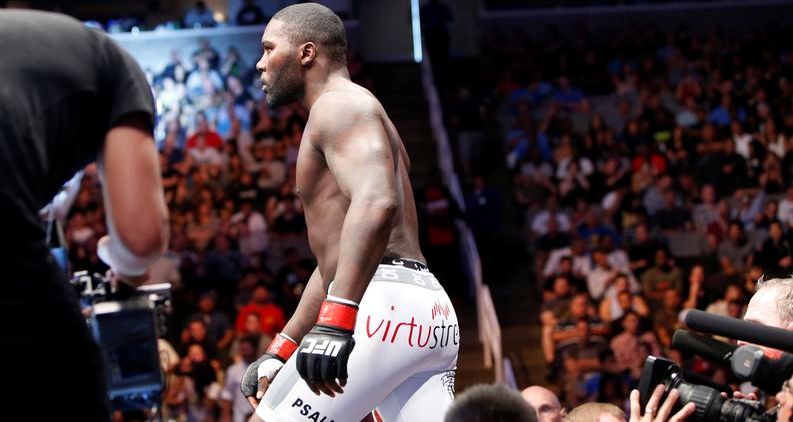 Anthony “Rumble” Johnson made a strong case for a title shot, stopping former title challenger Alexander Gustafsson in the opening frame of the night’s main event. Johnson was aggressive from the start, attacking the towering Swede along the cage. Gustafsson reclaimed the center of the cage, but Johnson wobbled him with a right hand. Johnson smelled blood and unloaded with multiple head kicks. An uppercut landed and Gustafsson fell to the ground. Johnson pounced and delivered a steady onslaught of punches, forcing referee Marc Goddard to halt the bout.

Gegard Mousasi got back in the win column, stopping former Strikeforce and Pride title holder Dan Henderson in the first round. Henderson was loading up on his right early in the fight and absorbed combinations from Mousasi. Henderson pressed forward and Mousasi connected with a right hand behind the temple. Henderson buckled and then crashed into the fence. Mousasi followed with a left hand and referee Leon Roberts prevented further damage.

Ultimate Fighter winner Ryan Bader eked out a split decision win over fellow wrestling stalwart Phil Davis. Bader used his jab early to frustrate Davis on the feet. Davis looked for takedowns, but Bader easily stuffed them. In the middle round, Davis did secure a takedown, but Bader was able to quickly work back to his feet. Davis scored with kicks in round three, but Bader earned his first takedown of the bout late in the frame. In the end, Bader did enough to convince two of the judges at cageside to give him the win.

Featherweight Sam Sicilia ended the night of Sweden’s Akira Corassani with a violent, first-round knockout. Sicilia stalked Corassani to open the bout, but the Swede was able to stay outside of Sicilia’s range. Sicilia closed the distance and pushed the fight against the cage, but Corassani broke free. Sicilia continued to press forward and connected with a right hook that turned out the lights on Corassani. He crashed to the mat unconscious as the referee peeled Sicilia off of him.

Albert Tumenov survived a tough first round against Sweden’s Nico Musoke and fought back to earn a unanimous decision win. Musoke fired body kick after body kick, turning Tumenov’s body red. Round two saw Tumenov find his range with his boxing and stuff multiple takedown attempts from the Swede. In round three, Tumenov turned up his output, bloodying the face of Musoke and sealing the win.

Welterweight Kenny Robertson picked up his third straight UFC win, knocking out the debuting Sultan Aliev in the first round. Robertson showcased his wrestling prowess early, putting the sambo stylist Aliev on his back. When the fight returned to the feet, Aliev looked for a spinning back kick, but Robertson countered with a left hook that sent the Russian crashing to the mat. Robertson followed with more punches and the referee was forced to intervene.

In his UFC debut, Finland’s Makwan Amirkhani starched TUF: Live veteran Andy Ogle in just eight seconds. Amirkhani opened with a flying knee to the body of Ogle that sent the Brit crashing to the mat. Amirkhani followed with punches and the referee quickly waived off the bout.

Nikita Krylov wasted little time dispatching of fellow light heavyweight Stanislav Nedkov. Krylov clipped Nedkov with a big shot as Nedkov barreled forward and quickly looked for an anaconda choke. Nedkov managed to escape, but Krylov switched to a guillotine choke along the fence and coerced the tap from Nedkov.

Lightweight Mairbek Taisumov completed destroyed Octagon newcomer Anthony Christodoulou by second-round knockout. Taisumov battered Christodoulou in the opening stanza with leg kicks, punches and multiple spinning back kicks to the body. Early in round two, Taisumov tossed Christodoulou to the mat and dropped heavy punches from the top. The shots landed flush and put Christodoulou out cold.

Featherweight Mirsad Bektic remained undefeated and made late-notice opponent Paul Redmond pay for missing weight, earning a lopsided decision win. Bektic quickly put Redmond on his back, setting the tone for the entire fight. He rained elbows, opening up multiple cuts on the face of Redmond. Bektic’s dominance continued in rounds two and three, as he mounted Redmond and pounded away from the top. Redmond lasted until the final bell, but never put together any offense.

Heavyweight Viktor Pesta spoiled the promotional debut of Russia’s Konstantin Erokhin, claiming a unanimous decision win. Erokhin came out firing, rocking Pesta multiple times. Pesta’s chin absorbed the onslaught and he was able to bring Erokhin to the mat. Once there, Pesta dominated the fight. Erokhin looked very uncomfortable on his back throughout, allowing Pesta to cruise to the win on the scorecards.

Ireland’s Neil Seery handed Chris Beal the first loss of his career in their flyweight contest. The pair engaged in a back-and-forth battle, with Beal earning takedowns early. However, it was Seery’s pace that was the difference, as he peppered Beal with strikes as the fight progressed. When the final horn sounded, the judges gave Seery the unanimous decision win.