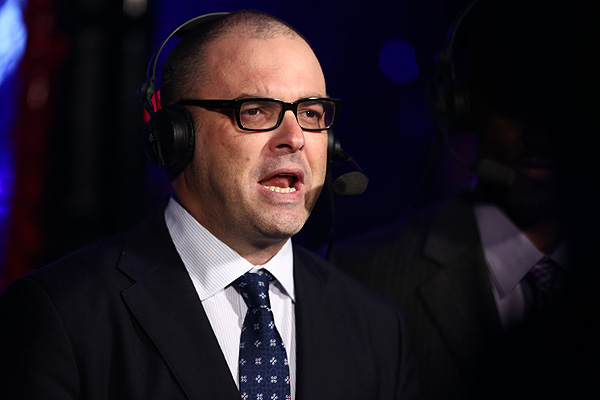 Mauro Ranallo: Fighting For His Own Cause

Mauro Ranallo’s introduction to fighting started as a child, when his parents took him to local professional wrestling matches in his native Vancouver, British Columbia. But while his first exposure to fighting was with scripted wrestling matches, there’s nothing fake about Ranallo’s journey into combat sports or his work as a mental-health advocate.

Also a boxing fan, Ranallo enjoyed watching legendary fighters like Muhammad Ali, Joe Frazier and George Foreman. However, while Ranallo was drawn to fighting at an early age, his desire to participate in the sport was confined to outside the cage and the squared circle.

“I always wanted to be an entertainer and broadcaster,” Ranallo told Combat Press. “I was drawn to the dramatic parts and the athletic ability of these performers.”

Ranallo has a front-row seat to the ongoing evolution of MMA, which he believes began with the “large production and incredible personalities” in Pride. That evolution continued with the emergence of the UFC and the “explosion” of The Ultimate Fighter reality show, he added.

“They broke through in a big way, and it’s continued with the rise of fighters like Ronda Rousey and Conor McGregor,” Ranallo said. “It’s a credit to the UFC that they became a juggernaut by also using social media and Fight Pass. The best thing about that is, MMA can be digested in little bits by watching one fight at a time or by watching an entire card.”

Ranallo also noted the evolution of fighters themselves who are breaking into the sport by being well versed in all styles, instead of just being an expert in one discipline. Ranallo offered UFC welterweight Rory MacDonald as an example.

“In time, I believe they will be the best athletes on the planet,” Ranallo said of MMA fighters. Ranallo will bring this type of insight and analysis when he and his friend and partner from his days announcing Pride, former Pride and UFC fighter Bas Rutten, take over as hosts of the weekly Inside MMA show on AXS TV. The duo also host their own podcast.

“When the two of us get together, the energy is weird and wacky, all in the same room,” Ranallo said. “Bas is a legend who helped build the sport of MMA, and he offers a unique perspective.”

Ranallo expects his and Rutten’s stint on Inside MMA to go deep into news reporting on the sport, while retaining the talents of former host Kenny Rice.

“We want to get to know fighters outside the cage and use new, cool technology to make the show more interactive,” he said.

Ranallo remembers his time in Pride fondly, particularly the fight between Fedor Emelianenko and Mirko “Cro Cop” Filipovic in 2005. He mentioned how Cro Cop was brought to tears during his introduction prior to the fight, thanks to the package Pride created for the event.

Ranallo also mentioned the late Kevin Randleman, who competed in Pride and passed away earlier this year.

“Fedir, Cro Cop and Antonio ‘Minotauro’ Nogueira were considered the holy trinity of Pride,” Ranallo said. “[But] Randleman was considered the greatest athlete in Pride, and him knocking out Cro Cop is a big memory for me.”

As much as Ranallo loves MMA, he got his start as an announcer in All-Star Wrestling and Stampede Wrestling in his native Canada. Ranallo provided commentary in New Japan Pro Wrestling with former Pride and current UFC fighter Josh Barnett and had a front-row seat to wrestlers like Shinsuke Nakamura, Hiroshi Tanahashi and A.J. Styles.

Ranallo and Styles actually made their debut in the WWE around the same time earlier this year. Ranallo provides play-by-play commentary on WWE’s weekly Smackdown show and said he is a “lifelong fan” of the organization. Among the matches Ranallo wishes he could have commentated on include Randy “Macho Man” Savage vs. Ricky “The Dragon” Steamboat at Wrestlemania 3, Bret “The Hitman” Hart vs. “The British Bulldog” Davey Boy Smith at Summerslam 1992, and when Hart wrestled his brother Owen Hart at Wrestlemania X in 1994.

Ranallo said he is having a “blast” working with his fellow announcers Jerry “The King” Lawler and Byron Saxton on WWE’s Smackdown. He also credits Michael Cole, the play-by-play announcer on WWE’s live, weekly Monday Night Raw program for helping to bring him on board in the WWE.

“I wouldn’t be as successful if I had to call the action live like Michael Cole does on Monday nights,” Ranallo said. “I’m proud to be part of this new generation of wrestlers and Divas.”

Ranallo became emotional when talking about how his parents see him do what he loves on a weekly basis.

“It’s an amazing legacy to let my dad know, ‘Hey, your kid is doing all right,’” he said.

However, pro wrestling and MMA isn’t the only legacy Ranallo wants to leave behind.He is also an outspoken advocate on the topic of mental health, after he was diagnosed as manic-depressive at age 19 and was later diagnosed with bipolar affective disorder. Ranallo was in denial of his diagnosis at first.

“I wanted to show I could still do things people thought I couldn’t do,” he added.

However, Ranallo came to grips with his illness and noted the recent suicide of a young MMA fighter in Canada as a reminder that “mental illness is a sickness, not a weakness,” he said. “We’re losing too many lives and we need more resources.”

Ranallo considers himself “very lucky” with the success he’s achieved. He hopes he will be remembered as a supportive voice for those dealing with mental illness.