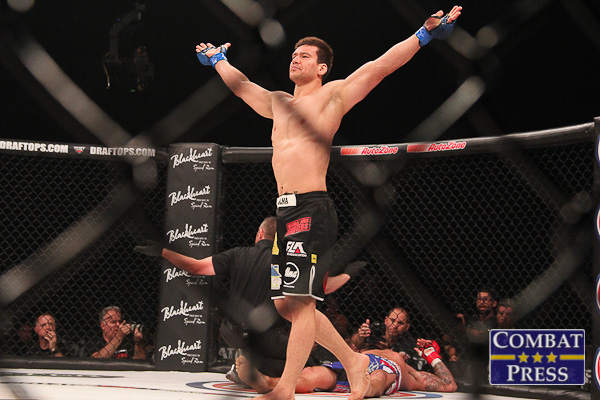 Bellator 146 marks the penultimate event for Bellator in 2015. The promotion heads to the Winstar World Casino and Resort in Thackerville, Okla. Bellator 146 has a five-fight main card with many more fights in the preliminary portion.

There are no titles on the line for this card, but Bellator is bringing the heavy hitters in the main event. Hisaki Kato is coming off a wild superman-punch knockout over Joe Schilling in his Bellator debut. Kato’s opponent, Melvin Manhoef, is coming off back-to-back knockout losses against Schilling and former Bellator middleweight champion Alexander Shlemenko. Manhoef’s loss to Shlemenko was reversed to a no-contest following the Russian’s failed drug test. Both Manhoef and Kato should look to trade on the feet, making for a wild slugfest.

The co-headliner might go a different route. Wrestling star Bubba Jenkins takes on Jordan Parsons at the featherweight level. Jenkins has been a big prospect for the organization following his championship wrestling career at the collegiate level for Arizona State University. Jenkins last fought in June, when he beat Joe Wilk by TKO. Parsons has quietly put together two straight wins, both finishes, in Bellator and will look to add Jenkins to his list of victims.

There are three additional fights on the main card. At the light-heavyweight level, UFC veteran Houston Alexander meets Guilherme Viana. At welterweight, Chidi Njokuani takes on Ricky Rainey. Finally, at lightweight, Brandon Girtz seeks to add another big Bellator name to his resume when he tries to avenge a loss against Derek Campos.

This is a pretty good match-up. Hisaki Kato is coming off an impressive knockout victory over Joe Schilling. Schilling is the last guy to beat Melvin Manhoef, and he did so in wildly impressive fashion.

Manhoef has issues if this goes past the first round. The Dutch kickboxer relies heavily on his striking and power to win fights. Sometimes he comes away with a jaw-dropping knockout and other times he’s on the receiving end. Manhoef has a lot of issues when it comes to his chin. He has four knockout losses in MMA and another handful in his kickboxing career. It is certainly troubling, and even more so in a fight against Kato, who is almost assured to be going for the knockout as well.

This fight will almost entirely be fought on the feet. The only time it may hit the mat is if one fighter gets dropped and the other pounces. Manhoef did that against Schilling, but he was unable to finish and paid the price in the second round after gassing out. Kato stood toe-to-toe with a kickboxer like Schilling and will more or less have the same game plan in mind against another powerful kickboxer in Manhoef. Kato isn’t afraid to trade with somebody who should have the superior striking advantage.

Manhoef’s chin makes him a risky pick. Kato will score a second-round knockout after Manhoef unloads all he has in the first frame.

Brandon Girtz is coming off an impressive win over former UFC lightweight Melvin Guillard. While it was ruled a split decision by the judges, it should have been a unanimous verdict in favor of Girtz. Now, Girtz gets a chance to rectify a loss on his resume when he rematches with Derek Campos.

The two fought at Bellator 96 in 2013. Campos was able to take the fight by unanimous decision. Since the fight, Girtz has earned a 4-1 record in Bellator and Campos has gone 3-2. That 3-2 mark might be deceptive considering those two losses for Campos came against former Bellator lightweight champion Michael Chandler and contender Patricky Freire.

In their last fight, Girtz looked to bring his opponent to the ground, much like he did in his most recent fight against Guillard. He had success with the takedowns against Campos and will choose the same route in the rematch. Girtz lost the fight with Campos on the feet. Girtz was able to secure a takedown in the first round, but he was unable to really get anything done in the striking department. The first and second rounds were instead scored in favor of Campos. The third round should provide Girtz’s with his ideal game plan, as he was really able to work his wrestling in that third round to make it a close fight.

Campos will look to beat Girtz on the feet, while Girtz will look to win the fight on the ground. The result most likely will be the same as the first fight. Campos will take a decision victory by keeping the fight in the stand-up realm as much as possible and scoring points with the judges.

Bubba Jenkins came close to securing a title shot earlier this year when he went up against Georgi Karakhanyan. Jenkins just needed to beat Karakhanyan to get his crack at the featherweight belt, but he put forth an underwhelming performance that led to a quick submission loss in the first round. Jenkins then went on to beat Joe Wilk in June via a second-round TKO.

Jenkins needs to set up this fight against Jordan Parsons by utilizing his wrestling. The 27-year-old needs to bring this fight to the ground if he plans on coming out with a victory. While his hands are steadily improving, his skills on the ground can overwhelm opponents. Jenkins has also been in the spotlight a lot for Bellator and needs to fully come through on being the amazing fighter the promotion believes him to be.

A win over Parsons is a good start at fulfilling that idea. Parsons looked good against Julio Cesar Neves in the final round where he secured an arm-triangle after an early back-and-forth between the two. Parsons has flown under the radar and is getting a nice step up in competition to really make some noise at featherweight. Both of his victories in Bellator have been finishes, and a finish against Jenkins could really turn some heads.

Jenkins should be able to get this fight to the ground with his superior wrestling, though, and tire out Parsons on his way to a unanimous decision victory.

Chidi Njokuani, much like his brother Anthony, possesses a very adept set of striking skills that makes him a dangerous man to beat on the feet. Njokuani has had a very good year, with a split decision victory over Max Griffin in a Tachi Palace Fights title tilt and an RFA title win over Gilbert Smith.

Chidi Njokuani shares the same weakness as his brother: problems with defensive wrestling. However, he has shown to have better takedown defense and ground work than his brother. The aforementioned Smith was supposed to be able to outwrestle Njokuani and win the fight, but Njokuani was a tough out and showed some good takedown defense after the first round.

The 26-year-old Njokuani has eight knockout victories on his record and has been an interesting prospect at the welterweight level. Ricky Rainey, who has seven knockout victories under his belt, should be just as willing to keep the fight standing. Rainey is 3-1 under the Bellator banner, where his lone loss came, unsurprisingly, against Michael “Venom” Page. Outside of the one setback, Rainey has rattled off three knockout victories with the promotion.

This will come down to who can land that first killer strike, but it should go in Njokuani’s favor. If he comes out much like Page did against Rainey and tries to overwhelm Rainey with his striking, he should take this fight.

This scrap between light heavyweights Houston Alexander and Guilherme Viana should be a fun fight. Both guys are most likely to keep this on feet and trade punches. Each man is coming off of losses as well.

Alexander has been known for one thing his entire career: his punching power. Most of his victories came long ago, though. His most recent knockout win was in July 2013 against Chuck Grigsby. He has a more recent TKO victory against Matt Uhde at Bellator 117 in April 2014, but that was due to a doctor’s stoppage and not by way of Alexander’s hands. Alexander has seemingly fallen off since the Grigsby victory. In that time, he has gone 1-3 with a draw.

Viana is getting a chance to legitimize his resume with a victory over a veteran like Alexander. Much like his opponent, Viana possesses some knockout power. Four of Viana’s six victories came by knockout or TKO. The other two came by way of submission. Viana was brought into Bellator to face Francis Carmont earlier this year and lost the fight by decision. Luckily for him, he will be getting a fighter that is as game as him to keep the fight standing.

It’s hard to say who will win this fight. A knockout seems the most obvious way this fight will end, but both guys possess equal ability in ending it. However, Viana should be able to take an aging Alexander out for the victory.