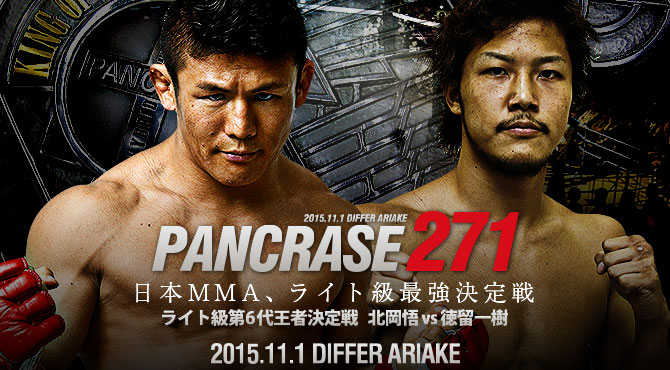 One of Japanese MMA’s best lightweights, Satoru Kitaoka, returns to Pancrase after defending his Deep Lightweight title at Deep Cage Impact 2015 in July. The Deep champion looks for his third major Japanese promotional title when he tries to stop the winning streak of the returning Kazuki Tokudome. Tokudome has won two fights since returning to Pancrase upon his release from the UFC in late 2014.

Multiple-division King of Pancrase champion Mitsuhisa Sunabe puts his flyweight King of Pancrase title on the line against 52-kilogram tournament winner Hiroyuki Abe. Sunabe has held the flyweight title since a December 2011 victory over Abe for the inaugural flyweight King of Pancrase championship. The red-headed fight-finisher has only defended his title twice since the first fight between the two, adding eight more non-title wins to move his current winning streak to 12 overall. Abe, a former Shooto strawweight title challenger, is riding a three-fight winning streak heading into his third attempt to earn his first world title.

Carlos Condit, Paul Daley, Takanori Gomi, Katsunori Kikuno, Kurt Pellegrino, Yoshiyuki Yoshida, Eiji Mitsuoka, Kuniyoshi Hironaka, Willamy Freire and Jutaro Nakao; Ten, the number of UFC veterans Satoru Kitaoka has beaten in his 59-fight professional career. Kitaoka won the Sengoku lightweight championship with an achilles lock submission of former Pride FC lightweight champion Takanori Gomi at Sengoku No Ran 2009 on Jan. 4, 2009. The top-level lightweight earned his Deep title with a decision victory over Daisuke Nakamura at Deep: 62 Impact in April 2013. The 35-year-old with more nicknames than Hector Lombard has won five in a row and 12 of his past 15 fights.

Kazuki Tokudome re-entered the Pancrase ring in 2015 after three consecutive losses in the UFC led to his release in November 2014. Tokudome put former Shooto title challenger Yoshihiro Koyama away in just over 90 seconds at Pancrase 265 in March 2015. Tokudome continued his winning ways in his last fight with a unanimous decision win over The Ultimate Fighter 12 season member JJ Ambrose at Pancrase 267 in May 2015. While Tokudome didn’t necessarily look out of place against UFC competition, the move back to Pancrase has worked out for the 28-year-old’s career in such a competitive weight division.

Tokudome is a tough fighter – as evidenced in his ability to survive multiple knockdowns against the “Korean Bulldozer” Yui Chul Nam at UFC Fight Night: Kim vs. Hathaway in March 2014 – who loves to grind his opponents down in the clinch and in the top position on the ground. The southpaw has a good right jab and left straight, but he likes to do much of his work on the mat. Kitaoka will oblige his foe and work to get the fight to the mat. Kitaoka has an aggressive wrestling style that is more geared towards effectiveness than excitement. With five rounds to work, Kitaoka will make this a grueling battle and the veteran of almost three times as many fights as Tokudome will come out on top after pulling off a spectacular submission victory.

Mitsuhisa Sunabe has quietly racked up one of the most impressive flyweight resumes in Japanese MMA history. Sunabe has won titles in both the 120-pound and 125-pound weight divisions. He has racked up an impressive resume of six top-10 victories with outstanding performances over former Shooto champion Rambaa “M16” Somdet and former title challenger Noboru “Shinpei” Tahara. Sunabe is a dynamic striker with sound grappling ability. A finisher in every aspect of the word, Sunabe carries fight-ending power in his high kicks and striking combinations.

Hiroyuki Abe came into MMA as a highly touted prospect. Donned Hiroyuki “Abe 2.0” after the long-time Shooto warrior Hiroyuki Abe from the Abe Ani Combat Club, the same gym that played host to Megumi Fujii and Antonio Carvalho. Abe encompassed the Shooto spirit, garnering a following when the only way to learn about the next best prospect was fighting through the nonsense on the Sherdog or The Underground forums. Abe started competing as a well-rounded fighter with a knack for aggression. Abe nearly became the best strawweight in the world when he pushed Somdet to the brink of defeat before an injury put an end to his night at Shooto: The Way of Shooto 4: Like a Tiger, Like a Dragon in July 2010.

Sunabe will have an advantage on the feet and in the mental battle, holding a knockout win over the challenger in the past. Abe needs to bring the fight to the floor and quickly work towards top position. Sunabe has a veteran presence while in the cage, he will showcase his full skill set in what should be an exciting fight for the flyweight title. Sunabe hurts Abe late in the fight and he puts another impressive win on his resume.

Rildeci “Escorpião” Lima Dias has made a name for himself with 17 finishes on the Brazilian regional circuit in his 22-fight career. Rildeci capped off his eight-fight winning streak with a third-round submission victory over Hiroki Yamashita at Pancrase 268. The 29-year-old Brazilian has won 18 of his past 19 fights since 2010.

Masatatsu Ueda has made a name for himself by cutting through the Pancrase rookie ranks when he made his MMA debut in 2013. Before his last fight, Ueda was on a four-fight winning streak after fighting to a draw with veteran Yuki Yasunaga at Pancrase 253 in November 2013. Ueda’s winning streak ended in his last fight with a split decision defeat at the hands of Yasutaka Koga at Pancrase 267 in May 2015.

Rildeci “Escorpião” is a long, athletic striker with an aggressive Muay Thai style. He can get wild with his technique at times, but his lack of technical prowess is made up for in size, speed and agility. He will have a striking advantage over Ueda, but the Japanese fighter is definitely not out of this fight on the feet. Rildeci has an aggressive submission attack, but Ueda may be the better overall grappler. This is a battle of prospects that most likely sees the Brazilian make a step up in competition to earn his 20th career victory.

Masakatsu Ueda has been near the top or just outside of the top-10 fighters at bantamweight for the past seven years. Ueda began his career in Shooto, earning every amateur and rookie tournament along the way to a 10-0-2 record before his first defeat at the hands of Shuichiro Katsumura in March 2010. Ueda continued to collect wins over top-level fighters Kyoji Horiguchi, Eduardo Dantas, Koetsu Okazaki and many others. Ueda turned his 2014-15 campaign around at Pancrase 268 with a win over Luis Alberto Nogueira in July 2015.

With the last-minute injury for Brazilian fighter Fabiano Silva, Pancrase mainstay Kosuke Terashima took the short-notice opportunity against the high-level bantamweight. The 27-year-old Terashima returns to the Pancrase cage after losing to Kenta Takizawa in his last bout at Pancrase 270 less than one month ago. Before the defeat, Terashima had put together the second-longest winning streak of his career with three straight wins.

While Terashima is a well-rounded grappler who has continued to improve his striking, Ueda is still a level above. Ueda’s striking has developed over his time spent in ONE Championship before moving to Pancrase for his last bout. If the fight hits the mat, Ueda will have a clear advantage whether he is in top position or working off of his back. Ueda wins his 20th career fight and further cements his legacy as of the the top bantamweights from the land of the rising sun.

Former Bellator bantamweight tournament finalist Luis Nogueira was released from his Bellator contract following a first-round submission win over former King of the Cage champion Frank Baca at Bellator 105 in October 2013. Nogueira earned victories in his next three bouts under the Face to Face FC banner, winning the promotion’s vacant bantamweight title with a decision win over Hemerson Hubaldo in April 2014. “Betao” had a setback in his last fight at Pancrase 268 against Masakatsu Ueda, but he will be the favorite heading into this contest with the “BRAVE Devil” Yuki Baba.

Baba went on an eight-fight winning streak that began with a Deep one-night tournament victory in December 2010. The streak that lasted two years would include one more Deep one-night tournament victory and veteran wins over Yuki Kosaka and Masaomi Saito. Baba won just one of his next five fights. His last loss was an 18-second knockout defeat at the hands of Canadian prospect Lenny Wheeler at Pancrase 265 in March 2015.

This is a winnable fight for the Brazilian. Nogueira has shown the skill to compete at a high level. Nogueira stands to gain the most from taking the fight to the floor, an area where Baba is his weakest. Baba has the chance to land a shot with his aggressive high volume attack, but the chances he lands over 15 minutes will diminish greatly if “Betao” decides to take the fight to the floor. Nogueira locks in a late submission to earn his first career win in Pancrase.