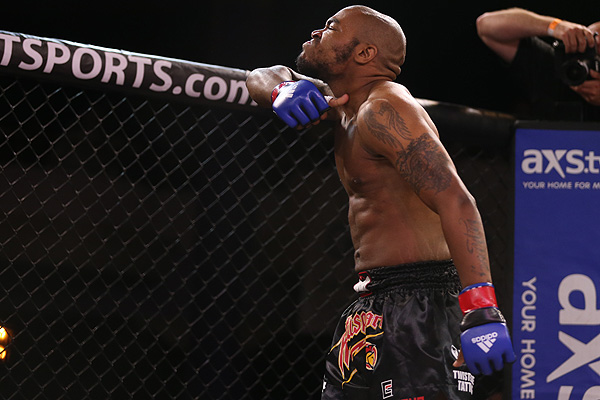 A fighter is only as good as his or her team. I’m not sure that phrase could apply to mixed martial arts, since fighters come from all over the world and from teams big or small. They may come from world-renowned gyms like Team Jackson-Winkeljohn in New Mexico, or they may come from a smaller, more centrally-based gym like the one in Washington that’s home to the pound-for-pound best fighter in the world, UFC flyweight champion Demetrious Johnson.

Victory FC middleweight Mike Rhodes trains with some of the very best around at the well-known Team Roufusport in Milwaukee. His teammates include former UFC lightweight champion Anthony Pettis and current UFC welterweight champ Tyron Woodley. Rhodes, whose record stands at 10-4, boasts some experience of his own in the UFC, actually.

“The UFC was a great experience, win or lose,” Rhodes told Combat Press.

Rhodes competed in the Octagon three times in 2014, but he was released after consecutive losses to George Sullivan, Robert Whittaker and Erick Silva.

“It didn’t mess me up or feel detrimental,” Rhodes said. “I’m mentally strong, and I put on some great performances, especially against Robert Whittaker, who’s now a top-10 guy.”

The Roufusport fighter’s UFC experience also showed him that he needed to take his dedication to MMA to another level. It’s a commitment that began when he competed in multiple sports growing up, including gymnastics, soccer and taekwondo. His foray into MMA came as a way to get in better shape while playing basketball.

“I was overweight — I was up to 270 pounds while playing forward,” Rhodes said. “I wanted to get in shape and get my weight down, so I started training and took a fight, and I fell in love with it.”

Rhodes won his first four fights on the regional circuit. He now boasts fights and victories for one of the bigger developmental MMA organizations, the Resurrection Fighting Alliance. He has faced the likes of Brandon Thatch and Alan Jouban. Rhodes defeated Jouban for the RFA middleweight title in 2013.

Rhodes attributes his success to his training and his love of martial arts.

“I’m trying every aspect and focusing on other people’s holes,” said Rhodes. “I feel relaxed when I’m in there, and I see the holes. I see what is going to happen. I’m still relatively young and this is only the beginning of my story.”

Part of his planned growth as a fighter is focusing on improving his jiu-jitsu and striking with the likes of Pettis and Woodley at Roufusport. However, that’s not all that Rhodes is learning from two of the very best fighters in the world.

“It’s been a pivotal part of my transition,” Rhodes said. “I lived with him and see how he trains, the sacrifices he’s made and the ups and downs he’s had. Tyron Woodley is like a big brother to me. I trained with and cornered him, and I have bunch of other teammates to inspire me.”

Rhodes is also learning how to create opportunities for himself outside the cage. It’s a trait that will come in handy as he once again navigates the regional MMA scene after his stint in the UFC.

“It taught me how to carry myself and conduct myself, and to know my worth,” Rhodes said of his time in the UFC. “The regional scene is growing and bringing in talent from all over, so there are more opportunities to get your name out there. So when the UFC comes calling again, I’ll have a bargaining chip.”

Before Rhodes explores a possible return to the Octagon, he has to successfully defend his Victory FC middleweight title on Nov. 23. Rhodes won the title after submitting Rakim Cleveland at VFC 51 in June. He’ll put the strap on the line against Ron Stallings, another UFC veteran, at VFC 53.

“I give him his props,” Rhodes said. “I have nothing but respect for Ron and how he carries himself as a man, and I’m glad for the opportunity. I need a tough fight and I’m happy to get a test. But I expect to win and I train to finish. I don’t change my approach. I’m going to finish Ron quick, and when my next opportunity comes, I’m going to cash in and make some money. I’m young and I want to fight, and have good times.”

Rhodes would like to thank his teammates and his strength and conditioning coach, as well as his sponsor, Carbon World Health, and his family and fans. Follow Rhodes on Twitter: @TeamRocBiggie
Advertisement