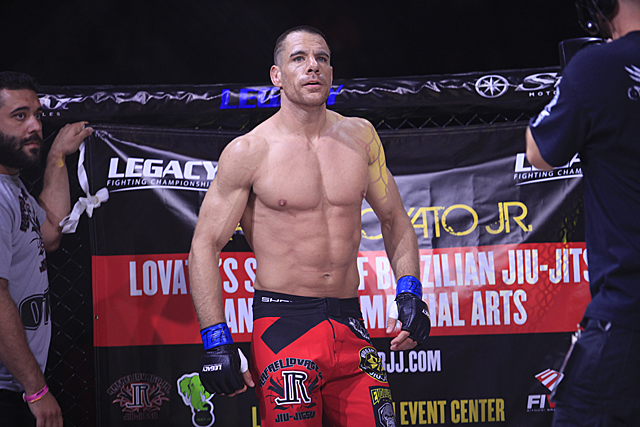 The best kind of hype train is one that runs along the tracks in a very low-key manner. After watching Aaron Pico, potentially one of the biggest MMA hype trains in recent history, lose in 24 seconds by a guillotine choke, promoters and fans alike learned that the train doesn’t carry much steam if it gets steam-rolled before one can blink. That’s what makes the recent success of Brazilian Jiu-Jitsu champion Rafael Lovato, Jr., so interesting.

Even in the day and age of social media, where it is nearly impossible to fly under the radar, a lot of mainstream MMA fans, and even some fighters, still don’t know who Lovato is. This sounds surprising, considering he is one of the most accomplished grapplers in the history of BJJ and holds a 5-0 record as a professional mixed martial artist who has won and defended the Legacy Fighting Championship middleweight title. That’s the best part about Lovato’s train — it doesn’t have a loud horn, but it makes a lot of noise in the cage.

In MMA, Lovato has finished all of his opponents — some by submission and some by knockout. However, even he did not think his last fight was going to end so quickly. In his Bellator debut in March, Lovato knocked out late replacement Charles Hackmann in just 13 seconds.

“I don’t ever think you expect a fight to be that quick,” Lovato told Combat Press. “We train for a war — to go the whole time. It was nice to feel myself react quickly and aggressively. It just let me know that all my training is clicking and I have more than one way to finish a fight.”

Many fighters who are at such a high level in one fighting modality always stick to what they are good at. Then nobody wants to watch them fight. Take Ben Askren, for example.

Askren is one of the most accomplished wrestlers in the history of MMA. However, in three years under the Bellator banner, he went mostly to decision and his three finishes were due to wrestling setups. After 33 months as the welterweight champ, the promotion released him.

Lovato does not have this problem. He may be one of the best submission artists to grace any cage, but he’s got a couple TKO victories under his belt. He certainly isn’t relying solely on his grappling skills.

Lovato’s next fight takes place on Friday night at Bellator 181 at the WinStar World Casino in his home state of Oklahoma. He faces another well-rounded fighter, five-year veteran Mike “Biggie” Rhodes. For this camp, as for all of his other camps, Lovato has made the international rounds, traveling from Oklahoma to Canada to Brazil.

“Pretty much all my training camps have been the same for the last couple years,” Lovato said. “I always go to Curitiba, Brazil, to train with Evolucao Thai under the guidance of Andre ‘Dida’ [Amado]. That’s where I get my really hard sparring and get out of my comfort zone, really focusing on the fight.

“I also have Dida’s brother, Mauricio ‘Veio’ [Amado], here in Oklahoma with me, finishing off all the final technical aspects of my game together. Beyond that, I have my strength-and-conditioning coach Luke Tyree, my wrestling coach Brian Piccolo, and all my students [and] all my jiu-jitsu guys that push me every day. It’s pretty much the same camp. I’m just sticking to my success formula.”

Rhodes is a nice step up in competition for Lovato. He is definitely one of Lovato’s highest-profile fights to date. Rhodes has held two regional titles. He trains out of the famed Roufusport camp in Milwaukee and spent all of 2014 fighting in the UFC. A purple belt in BJJ, Rhodes took a different path to fighting, getting started through cardio-kickboxing as a way to lose weight. He has managed to put together an impressive 10-4 record with seven stoppage wins.

“I found out about Rhodes almost like a full two months before the actual fight,” Lovato said. “We knew about it a while before they announced the actual fight. I liked the match-up. He’s got a lot of good experience. He’s fought in the UFC against some of the best. He’s a former [Resurrection Fighting Alliance] champ, and he’s a current Victory Fighting champ. I think it’s a good fight. He’s got a lot of good skills, he comes from a great camp, and it’s a perfect test for me right now.

“He’s very well rounded, and he doesn’t make any mistakes. He doesn’t go crazy and expose himself too much. He keeps it pretty technical. He’s got good stand-up [and] good wrestling. He’s knocked guys out [and] he’s finished guys on the ground, so I think he’s one of the most technical, complete fighters I’ve faced thus far. I still believe, on the ground, I’m going to have the advantage, no matter who the opponent is. The biggest difference between us is my advantage on the ground.”

Lovato’s advantage over nearly every fighter in the MMA arena is his grappling game, and Rhodes’ only two stoppage losses were by submission to guys who don’t hold a candle to Lovato’s skills on the mat. That being said, the BJJ superstar knows this is an MMA fight, and he is preparing accordingly.

Professor Lovato never stops training. In addition to teaching his own programs at his gym in Oklahoma City, he still competes at the highest levels of submission grappling. After this fight, he goes right back into training for the Abu Dhabi Combat Club World Championships, which takes place this fall in Finland. He plans to transition right into another fight camp from there.

“If this fight goes well, I’d like to fight once again before the year is over — maybe in November,” Lovato said. “I will be competing at ADCC in September, so that will kind of be my focus after the fight. I will get back, recover and start getting ready for ADCC. ADCC is pretty perfect to go right back into an MMA camp, because of all the grappling and the wrestling and how physical it is. I would like to fight again before the end of the year and finish of the year with three great victories inside the Bellator cage.”

The Bellator middleweight division is pretty stacked right now. With the recent addition of top-five UFC middleweight Gegard Mousasi, the talent pool is getting even deeper. This is a great place for Lovato to be, and, while a win over Rhodes may not be a ticket straight to a title shot, it definitely keeps him moving in the right direction.

“I think I probably still have a couple fights to go,” Lovato admitted. “Rhodes is a great fighter and has a great name, but he hasn’t fought in Bellator, so he’s not like one of the top guys in the Bellator middleweight division. I think a win over him will put me in the top of the division, and my next fight will hopefully be against one of the top guys in the division. From there, maybe another top guy at the beginning of next year and then, at some point next year, I’ll be in title contention.”

At 34 years old, Lovato has no plan of slowing down anytime soon. He has big aspirations for his fighting career, but he always stays true to his BJJ roots. He is really a shining example of the dedication his father, Rafael Lovato, Sr., has given to the sport. In fact, Lovato had the chance to share a very special honor that with his father last month.

“My dad has been a black belt now for over 14 years, and once you hit 14 years, you qualify for your fourth degree,” Lovato explained. “So, I talked to our instructors, Saulo and Xande Ribeiro, and I told them my dad was teaching a special class at my academy that night, so there was 40 to 50 people on the mat, and I thought that would be a really great time to present that stripe.

“Also, with the fact that I have a fight coming up, Father’s Day was just recently, and several things were going on with us personally as a family, I thought this was a great time to put his stripe on and have a good little family moment with that positive energy. The timing was just perfect, and I put the piece of tape on his belt. It was a really great night and [had] the kind of vibes you want going into a fight.”

Like his father, Lovato has dedicated his life to martial arts. His MMA career is the culmination of a lifetime of learning. This is not some hype train like the Pico fiasco. This is a very humble guy who is a killer, both on the mat and in the cage. He does his talking in the most pure form possible, through one-on-one combat. The real train is ready to plow through another opponent during the Bellator 181 prelims.

Lovato would like to thank all of his coaches and training partners, his family, friends, fans and sponsors: Onnit, PR2 Systems and War Tribe Gear. Follow Rafael on Twitter: @LovatoJrBJJ
Advertisement