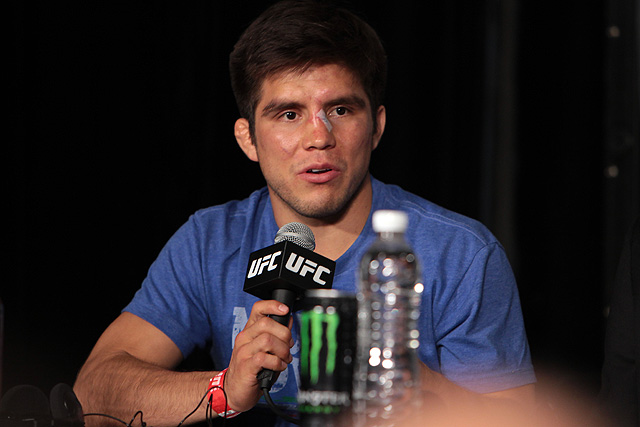 Dropped from the rankings: Fabricio Werdum (9)

Former World Series of Fighting champion Blagoy Ivanov put together a strong performance at UFC 238, where he defeated Tai Tuivasa. The victory pushes former champion Fabricio Werdum — who is currently serving a two-year suspension for a failed drug test — out of the top 10 and allows Ivanov to slide into the rankings. Cameroon native Francis Ngannou earned his third-straight knockout victory at UFC on ESPN 3, where he smashed former champion Junior dos Santos in just 71 seconds. Ngannou moves up to No. 3 with the dominant victory, while the Brazilian dos Santos slides to fourth.

The UFC’s return to Sweden was a bittersweet moment for fans of former title challenger Alexander Gustafsson. The towering Swede headlined UFC on ESPN+ 11 opposite Anthony Smith, but he was submitted in the fourth round. The emotional loss results in Gustafsson dropping all the way to fifth in the rankings. If his post-fight retirement sticks, he’ll drop from the rankings entirely in six months. On the same card, Austria’s Aleksandar Rakić sent the division a message when he destroyed England’s Jimi Manuwa by head kick in only 42 seconds. The fourth straight victory for Rakić causes a shake-up in the bottom portion of the top 10, opening the 10th spot for his taking.

Dropped from the rankings: Paulo Costa (10)

Bellator MMA has a new middleweight king following its 223rd event, which took place in London. American submission ace Rafael Lovato Jr. outlasted longtime veteran Gegard Mousasi to earn a majority decision and claim the belt. The victory vaults Lovato into eighth in the rankings and pushes Brazilian Paulo Costa outside the top 10.

There was a switch at the bottom of the welterweight rankings following June’s fisticuffs. Bellator welterweight titleholder Rory MacDonald put the first loss on the record of Neiman Gracie at Bellator 222. The win was enough for MacDonald to leapfrog Brazilian Demian Maia for ninth place. Maia was also in action at UFC on ESPN 3 in Minneapolis, where he earned a majority decision over Anthony Rocco Martin.

Dropped from the rankings: Kevin Lee (8)

UFC 238 featured a highly anticipated match-up between second-ranked Tony Ferguson and one the sport’s most reliable action fighters, Donald Cerrone. Ferguson damaged the right eye of Cerrone, which caused the fight to be stopped between the second and third rounds. The outcome results in both fighters maintaining their respective spots in the rankings. However, there were some changes at the bottom of the top 10. Kevin Lee’s recent move to welterweight — and third loss in four fights — pushes him out of the top 10. That opens the door for UFC lightweight Paul Felder and former Bellator MMA champion Michael Chandler to move into a tie for 10th place.

Dropped from the rankings: Bibiano Fernandes (10)

The UFC on ESPN+ 12 main event was over in a flash, but it had a big impact on the featherweight rankings. South Korea’s Chan Sung Jung handed sixth-ranked Renato Moicano his second consecutive TKO defeat in just 58 seconds. The win vaults Jung into seventh in the rankings, while Moicano slides to eighth. This shakes up the remaining spots in the top 10 and pushes ONE Championship titleholder Bibiano Fernandes out of a tie for 10th.

It was very busy month in the bantamweight division. UFC 238 featured half of the top 10 in the cage, including the crowning of a new UFC champion. Flyweight titleholder Henry Cejudo moved up in weight, survived an early onslaught from Marlon Moraes, and earned a third-round TKO victory to capture his second belt. Cejudo enters the rankings at the top spot, which was vacated by T.J. Dillashaw due to his USADA suspension for blood doping. Moraes remains in second place, despite the defeat. Also on the card, Aljamain Sterling stated his case for a title shot by dominating Brazilian Pedro Munhoz over three rounds. Sterling climbs to sixth with the performance, bumping Munhoz to seventh. A new face enters the top 10 from the same event, as Russian Petr Yan edged previously ranked Jimmie Rivera. Yan claims the ninth spot, pushing Brazil’s John Lineker from the rankings. Finally, at Bellator 222, Japan’s Kyoji Horiguchi cemented his place in the rankings with a second victory over Darrion Caldwell.

Any reports of the demise of former title challenger Joseph Benavidez were put to rest at UFC on ESPN 3. Benavidez earned a second TKO win over Brazil’s Jussier Formiga in the night’s co-main event. The loss drops Formiga to third, while Benavidez slots back into his usual home in the No. 2 spot.

Dropped from the rankings: Dustin Poirier (9)

UFC 238 has a major impact on the pound-for-pound top 10. First, Henry Cejudo climbs all the way to No. 3 by capturing his second UFC belt. Then, Valentina Shevchenko’s violent, head-kick knockout over Jessica Eye mixed up the bottom of the top 10. She enters the rankings in 10th alongside UFC strawweight queen Jessica Andrade, which bumps UFC interim titleholder Dustin Poirier back outside the rankings.