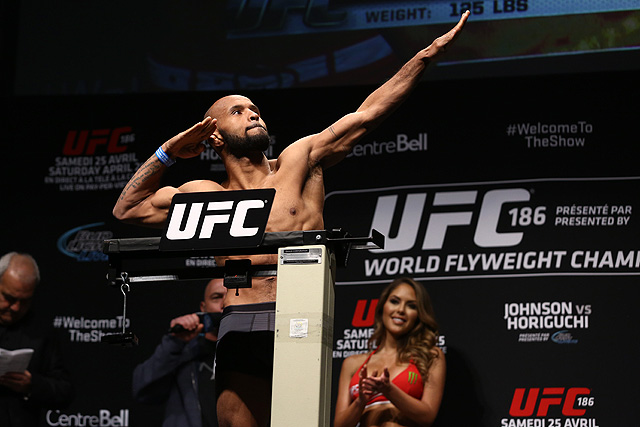 On Friday, Sept. 4, the UFC will host the weigh-ins for UFC 191: Johnson vs. Dodson 2 which takes place Saturday, Sept. 5, from the MGM Grand Garden Arena in Las Vegas.

In the night’s main event, the promotion’s flyweight kingpin, Demetrious Johnson, will put his belt on the line against a familiar foe, John Dodson. The pair met previously at UFC on Fox 6 in January of 2013, with Johnson earning a unanimous decision win over The Ultimate Fighter winner Dodson. Since then, “Mighty Mouse” has gone on to defend his belt five more times, including a fifth-round submission of Kyoji Horiguchi at UFC 186. Dodson, meanwhile, has reeled off three straight wins since the title defeat. The New Mexico fighter spent time on the shelf due to a knee injury, but earned another crack at Johnson with a decision win over Zach Makovsky at UFC 187.