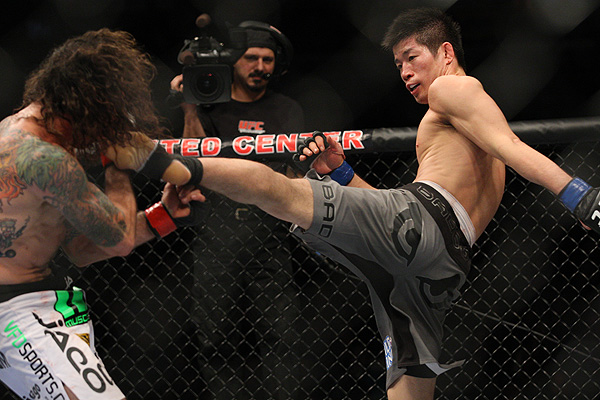 It probably shouldn’t have been as surprising as it was, but Bellator shocked MMA fans everywhere and made a few headlines late last month with its signing of longtime UFC veteran Josh Koscheck.

Koscheck wasn’t a game-changing signing for Bellator, but it was a solid way to gain some publicity and add a valuable fighter to the ranks at the same time. If the UFC released 10 more fighters with Koscheck’s credentials, there’s little doubt that Bellator head Scott Coker would jump all over the entire group. However, it’s extremely rare that the UFC decides to let guys like “Kos” get away, so Bellator and Coker are forced to take what they can get and hope for more crumbs to fall off the UFC’s table. That being said, it might be time for Coker and company to stop looking to hit a home run with every former UFC signing and to start becoming a little more active when middle-of-the-pack fighters hit the waiver wire.

By all accounts, most fight fans had to assume that Koscheck was on his way out of the door with the UFC. He’d lost his last five fights, four of them by stoppage, and his outspoken nature was almost always going to put him in hot water with the UFC brass once he stopped winning fights. However, Koscheck was so synonymous with the first season of The Ultimate Fighter alongside guys like Forrest Griffin, Diego Sanchez and — most notably as far as Koscheck is concerned — Chris Leben, that it felt like Koscheck was going to be a Zuffa lifer. It was bizarre to hear Koscheck’s name on a Bellator broadcast.

But while many fight fans have criticized the signing due to Koscheck’s age and his recent losing streak, it’s hard to deny that Bellator made an impact and, most importantly, added another recognizable fighter to a division where it had virtually no star power.

While it’s been a bit of a process, the Bellator roster has been beefing up slowly but surely over the last year or so. Signings like Koscheck and fellow UFC castoff Phil Davis stand out, but smaller moves, like the signing of up-and-coming wrestling prospect Ed Ruth earlier this year or the investment in promoting young stars like Will Brooks and Patricio “Pitbull” Freire, could possibly allow Bellator to step out of the shadows and go after the UFC one day. However, for everything the promotion has done to succeed as of late, there’s still a major flaw in the organization’s ability to put on competitive shows due to its lack of credible mid-tier fighters. That’s where the recent UFC roster cuts could serve as a major asset.

Right around the time that Koscheck was let go by the UFC, a slew of other fighters ended up on the chopping block as well. There are a handful of those fighters who would do Bellator a lot of good if they ended up fighting for the organization.

Japan’s Hatsu Hioki struggled to a 3-5 record inside the Octagon, but he is just 31 years old and it wouldn’t be a shock if he could win a couple of fights in Bellator en route to providing the company’s featherweight champion, Freire, with a rare opponent who can boast UFC credentials. While he may not have won any major fights under the Zuffa banner, the majority of Hioki’s losses inside the UFC came against opponents that were ranked in the promotion’s top 10.

Throw another recent UFC release like Robbie “Problems” Peralta into the mix, and suddenly the Bellator featherweight roster has two more notable fighters in a division where most fans would struggle to name a handful of Bellator’s guys. No one would expect Hioki and Peralta to wreck the Bellator elite or even become true title contenders, but just adding these guys to a free card on Spike TV could not only help ratings (it certainly won’t hurt), but it could also help to create new stars if the former UFC fighters are upset by some of the talented but relatively unknown prospects Bellator currently has under contract.

This could happen across most Bellator divisions. One could argue that the Bellator light heavyweight division, bolstered by champ Liam McGeary, Emanuel Newton, Muhammed “King Mo” Lawal and Phil Davis, is its strongest. But adding a veteran like recent UFC castoff Ryan Jimmo to the mix would definitely help. Jimmo wasn’t a world beater in the UFC, but he put on a few exciting fights and would be a decent foil for the top Bellator guys at 205 pounds.

Or, better yet, why not sign a former The Ultimate Fighter winner (and brother to Bellator’s welterweight champion, Douglas Lima)? Dhiego, the younger of the Lima brothers, had a hard time in the Octagon, where he went just 1-3 in his four-fight run, but he was also on television for 13 weeks less than two years ago and has family ties to one of Bellator’s most loyal stars. He certainly doesn’t seem like he’d be a player for the welterweight title, but he’s only 26 years old and could develop into a core member of the Bellator roster if given the opportunity.

It’s easy to see why Bellator would look to distance itself from the UFC and therefore hesitate to sign some of the middle-of-the-pack fighters once the UFC lets them go. However, in order to build a complete roster, the organization should start to look toward adding a few more of these guys when they become available. Fighters can only become superstars when they’ve fought viable competition. Bellator is doing its best to make sure the competition is there, but it’s too often ignoring one of the most straightforward solutions.

MMA promotion is a marathon, not a sprint. There’s no chance that Bellator could snag enough top fighters from the UFC in order to be realistically competitive any time soon. But if Coker and company can slowly turn their mid-tier fighters into something formidable and allow their up-and-coming guys to possibly earn a meaningful victory or two before receiving a title fight, then it will force fight fans to look at Bellator in a completely new light. For most companies, success usually starts at the top or the bottom. In Bellator’s case, though, it might start by improving the middle.