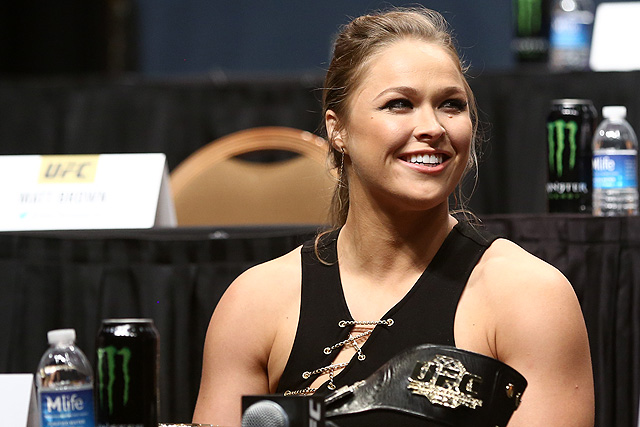 After watching the Ronda Rousey hype machine absolutely explode over the last three years, it’s easy to forget that at one point it looked like Rousey and the rest of her women’s MMA counterparts would never get the chance to compete in a UFC cage. Before Rousey was making Hollywood blockbusters and gracing the cover of Sports Illustrated, “Rowdy” was just another female mixed martial artist in a sport where women were barely an afterthought. With the UFC known as the premier place to battle and UFC management seemingly firmly against the idea of adding female competitors to the roster, Rousey and the rest of the top female fighters in the world were all but guaranteed to struggle to get noticed outside of the MMA community.

It was Rousey’s win in a highly anticipated Strikeforce title bout over Miesha Tate that changed the perception of UFC President Dana White and convinced him that women deserved a place in the Octagon. Since the moment she stepped foot in the UFC, it’s been Rousey that has led the women’s MMA movement every step of the way. We’re three years into women competing inside the Octagon, but rarely if ever does a fight between two ladies go by without at least on Rousey named drop. In the same vein, every talented female fighter that bursts onto the scene immediately ends up being compared to Rousey in some way, shape or form, even if the similarities are slim to none. Even after Rousey was defeated by Holly Holm in her last outing (and made a star out of Holm in the process), there’s no denying that Rousey isn’t just the biggest star in women’s MMA, but right now Rousey pretty much is women’s MMA, especially at 135 pounds.

At the moment, Rousey’s spot as pretty much the one and only face of women’s MMA is a good thing. Even with the bright lights of Hollywood calling and enough endorsements to make a Manning brother blush, Rousey still seems committed to being a fighter. As long as that’s the case, nothing but good things can come out of Rousey as the face of the company. However, while the emergence of women’s MMA as a selling point in the sport has been tremendous with Rousey in the spotlight, it’s hard to see anyone being able to pick up where “Rowdy” leaves off when she decides to call it quits and pursue one or more of the many career opportunities headed her way.

Rousey has been the perfect blend of talent, charisma and sex appeal since she burst onto the scene a few years ago. It’s going to be extremely difficult to find someone who can try to come close to filling her shoes once she’s gone. Rousey isn’t a star only because she was defeating everyone in less than a minute, and she certainly didn’t become the most popular female athlete to emerge in years because she looks good in a swimsuit. She possessed a certain “it” factor that is rare among athletes, male or female, and if the UFC wants to keep its women’s divisions in the spotlight after Rousey’s gone, the responsibility, oddly enough, is going to fall on the former Olympian’s shoulders.

If the UFC is going to find a woman to try to replicate what Rousey has done, the company is going to need to make sure that the fighter is as closely connected to Rousey as possible. Let’s face it, fighters as dominant as Rousey don’t come around often, and even the ones that do are nowhere near as marketable as Rousey has proven to be. The only way the UFC can possibly go about replacing Rousey as its biggest female draw is to put the replacement in the cage opposite the monster herself. Holm may not be quite to Rousey status in the minds of sports fans, but no one is going to forget about her anytime soon after she took out Rousey. That’s what the UFC is going to have to bank on happening to another woman or two in the near future if it wants to keep its women’s bantamweight division as one of the marquee weight classes.

It would be great if the UFC could have another female fighter organically climb to the top of the sport without needing a win over Rousey to do it, but Rousey is so unique that the scenario seems impossible. No one has ever walked through opponents with the ease that Rousey exhibited during her title run, and finding someone to replicate that feat and become the female face of the company isn’t going to happen unless that someone can show up Rousey in the process. The road to becoming a superstar goes through Rousey, and if the UFC doesn’t find someone to take the next step soon, there’s a good chance the entire women’s MMA scene will take a nearly crippling hit when Rousey walks away.

Even without the belt, there’s no denying that Rousey is synonymous with the past, present and future of women’s MMA. If the UFC is hoping to create another female star or two at 135 pounds, the company is going to need the Rousey seal of approval to do it.