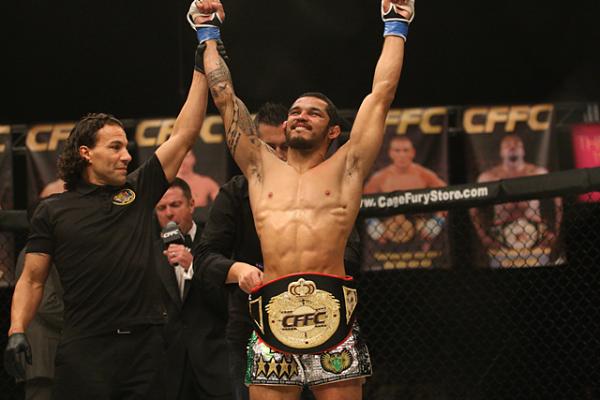 Out of Obscurity: Tech-Krep, XFC International 8 and CFFC 44

Tech-Krep Fighting Championship’s “Battle of Heroes” has shaped up as a showcase for the heavyweight division. Former Bellator champion Alexander Volkov is set to headline the event against Roy Boughton, and prospects Denis Goltsov and Zoumana Cisse meet in another of the card’s featured bouts. Not only will Goltsov and Cisse seek to add to their prospect status with another victory, but they’ll also vie for the Grand European Fighting Championship heavyweight strap.

The 24-year-old Goltsov has been competing professionally since August 2010. The Sambo Piter product had an up-and-down start to his career, amassing a 5-4 record and never winning more than two fights in a row during that stretch. After his first nine fights, though, something clicked for the sambo specialist. He went undefeated through his next seven bouts while scoring five stoppages. Goltsov has suffered a loss to the aforementioned Volkov, but he has added to his resume with recent wins over Boughton and Brett Rogers. Goltsov has scored five finishes via strikes and four by way of submission.

Cisse is undefeated through 10 fights, and his stoppage numbers match those of Goltsov. The Frenchman is a vicious striker who has scored three of his KO/TKO victories in 70 seconds or less. He’s also aggressive in pursuing submissions when the fight goes to the ground. All four of his submission victories came in the first round, including one that ended in just 21 seconds. The Atch Academy fighter has only seen the second round on one occasion. Cisse’s victims hold a current combined record of 19-19, but several of the fighters in that list currently sit at 0-1 or 0-2 in their pro careers.

The 6-foot-5 Goltsov will hold a sizeable height edge over his 5-foot-10 opponent, but he doesn’t use his length as well as he could. Boughton was able to take Goltsov down throughout their encounter, but Goltsov did enough to edge him on the scorecards. Where Boughton used persistence to score his takedowns, Cisse holds the strength and power to put Goltsov on the mat with more force. On the feet, Cisse throws looping haymakers that do a ton of damage when they find their mark. He’s taken on several notably taller opponents, but he has still managed to connect with extreme power against those opponents.

Cisse is a walking highlight reel of finishes, but it’s difficult to tell how he’ll fare in a league like Tech-Krep after spending his career fighting exclusively for French promotions against varying levels of talent. Goltsov has been knocked out once before, but that came against Volkov. Cisse’s best approach may actually be to storm forward, hoping to rock the Russian while ultimately going for the takedown. Goltsov has been vulnerable to submissions, which account for his other three defeats. Cisse has the bulk, strength and aggressiveness to plant Goltsov on the canvas and pursue the submission finish.

If one of Cisse’s bombs lands, it’ll be lights out for Goltsov. If the Russian manages to avoid those haymakers, though, he’ll still find trouble once Cisse scores a takedown. Goltsov was able to leverage his way out of bad positions against Boughton, but Cisse appears to be a more dominant fighter when he has top position. Look for the Frenchman to end this fight in the first round via submission.

Since the American-based XFC has become, essentially, the Brazilian-based XFC, the promotion has found its calling. While recognizable names like Tyson Nam headline events and the company continues to promote tournaments showcasing its male athletes, it’s the ladies who have taken center stage. At XFC International’s eighth event, Silvana Gomez Juarez faces Vanessa Melo in a featured flyweight bout, while undefeated flyweights Taila Santos and Debora Ferreira seek to advance to the finals of the promotion’s flyweight tournament in their respective semifinal-round bouts. Ferreira locks horns with Silvaneide Pereira, but Santos gets an even tougher test in the form of Poliana Botelho.

The 25-year-old Botelho has blasted her way through three of her four opponents. Debuting in September 2013, she scored two first-round TKO wins before colliding with the highly regarded—and still undefeated—Viviane Pereira at Bitetti Combat 20. Botelho went the distance with Pereira in a unanimous decision loss. She rebounded by entering the XFCi women’s flyweight tournament and advancing past quarterfinal-round opponent Karina Rodriguez via a third-round knockout, which came as the result of a kick to the body. The Nova Uniao fighter will enjoy a four-inch height advantage over her opponent.

Santos, a member of the Astra Fight Team, is also a talented striker. After debuting in November 2013 with a decision win over Josiane Nunes, the Muay Thai specialist notched two first-round victories via strikes, including a 30-second, head-kick knockout of Geisyele Nascimento. In her tournament quarterfinal bout against Rachael Cummins, Santos added a third TKO finish to her resume.

This fight has the potential to turn into an all-out striking war. Botelho is extremely active on her feet. She makes excellent use of her length and packs a ton of power in all of her strikes. Santos is also a quick starter with a strong kickboxing repertoire and the ability to finish fights in a hurry. Botelho’s length could be the difference maker in this fight. She’ll stay out of range of her shorter opponent’s strikes and land with punches and kicks of her own. Botelho will end the fight with a TKO finish, moving on to the tournament finals.

At Cage Fury Fighting Championships 38 in August, Levan Makashvili put his CFFC featherweight crown on the line against Alexandre “Popo” Bezerra. The pair fought for 25 minutes, and Bezerra walked away with the majority decision and the title belt. Now, at the promotion’s 44th offering, the two featherweights meet again. This time, Bezerra is the defending champ and Makashvili is the challenger.

The 27-year-old Bezerra is a familiar face to Bellator fans who watched the Brazilian Jiu-Jitsu brown belt advance to the semifinals of the Bellator featherweight tournament on two occasions (seasons six and eight). His only career losses came against current UFC fighter Charles Oliveira, via submission, and Bellator tournament vets Marlon Sandro and Mike Richman, both by way of split decision. The Daddis Fight Camp product, who went 7-2 under the Bellator banner, has 11 submission finishes, but he also has four victories via some form of knockout.

The 25-year-old Makashvili made his pro debut in 2011 and reeled off seven wins to earn a shot at the featherweight title against Scott Heckman. The New York-based fighter claimed the championship with a TKO finish of Heckman, but lost the belt to Bezerra in his first title defense. The Alpha Omega MMA product is a wrestler whose power has allowed him to score three knockouts and two TKO finishes. His other three victories came on the scorecards. Makashvili prefers to strike, but he has excellent level changes and strong takedowns.

Bezerra’s experience against high-level competition turned out to be a valuable asset in his first fight with Makashvili. The Brazilian scored on the feet and with takedowns. Meanwhile, Makashvili couldn’t get his offense going. “Popo” has better movement, footwork and the tighter technique on his feet, whereas Makashvili tends to wing punches and keep his hands a bit low. The difference in styles allowed Bezerra to get the better of Makashvili throughout their first contest, and there’s no reason to think things will be different in the rematch.

Bezerra is going to pick up where he left off in the first encounter. It’s going to be another closely contested affair that will likely go the distance. Bezerra’s experience and superior skill set will carry him to another judges’ nod.