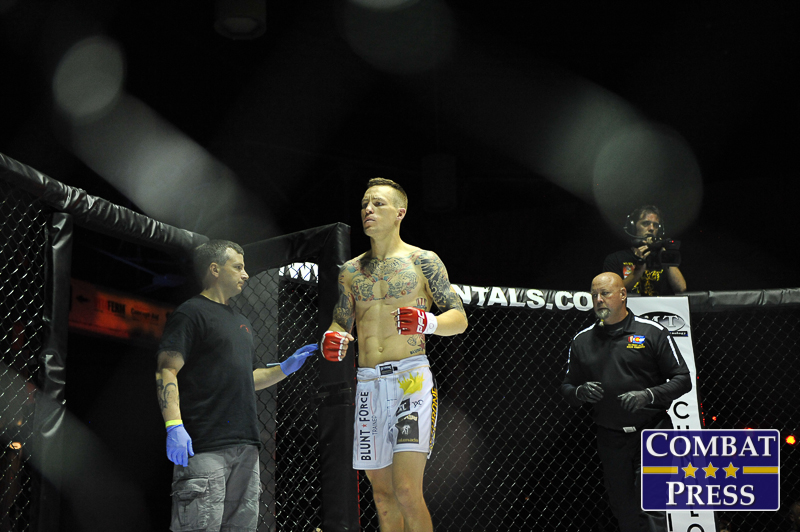 With the explosion of MMA over the last 20 years, most people in combat sports, whether they’re high-level grapplers or expert strikers, seem to eventually drift toward the mixed approach. However, there is a more of a grassroots movement creeping up where many fighters are starting to drift back to their specialty.

Tomorrow night, the recently revived Paramount MMA promotion kicks off its first event of the year. Paramount MMA 7 takes place at the iconic Paramount Theater in Denver. Justin Moss, a Colorado-based MMA fighter, will face another local talent, Joe Miles, but the fight will be a kickboxing match instead of an MMA fight.

Moss is a traditional striker who trains under local Muay Thai coach Oscar Martinez. He went 2-4 in his pro MMA career, but three of his losses were to grapplers.

“I’m kind of walking away from MMA,” Moss told Combat Press. “I train at a Muay Thai gym, and I just fought for GLORY. I’m just trying to keep that train running. You know, kickboxing, Muay Thai, it’s what I’m all about.

“I started boxing, and it had me go the MMA route just to find fights. From there, I just didn’t really like wrestling, to be honest. MMA has turned into a little too much sport with guys stealing rounds and all of that. In MMA, I had a couple losses where I was the better striker, but I lost because I got taken down. Now, I feel kickboxing is more my avenue, and I’m looking to put on some exciting fights. I definitely like the idea of shield fights. I’m not looking for decisions. I’m looking for finishes.”

Paramount MMA is one of a couple different Colorado promotions that have been integrating kickboxing matches into their cards. The promotion was recently taken over by Tony Sims, a former UFC fighter who trains at the Elevation Fight Team.

“The venue is awesome, and it’s such an incredible show,” Moss said. “It’s super awesome to sell tickets for. A lot of these shows in Colorado, you sell tickets for, but people rarely get their money’s worth. At Paramount, I feel good about everybody that comes out. I know they’re going to have a great night.

“They’ve done a really good job of getting the talent out. I think every fight is going to be good. Like Tony said, he’s really a fighters’ guy. He’s really good. He answers emails quickly, and everyone’s super excited to fight for Tony and all those guys.”

His opponent, the aforementioned Miles, is also an MMA fighter. Both men have been in the Colorado fight circuit for some time now, but Moss doesn’t know much about his opponent.

“I don’t really watch film — Oscar watches the film — and I don’t really know too much about [Miles],” Moss admitted. “It seems like he probably hits hard. Everybody hits hard, I guess. I think being with Oscar, I’m more of the technician, and he’s probably more of the brawler. I think I’ll pick him apart.”

Moss has big plans for his kickboxing career. He wants to fight multiple times in 2017. He knows that kickboxing matches aren’t as frequent as MMA fights, especially if he narrows the geographic region.

“I’d like to stay busy,” Moss said. “I’m not getting any younger. I’d like to fight three or four more times this year. I envision going in there, getting a finish, and going right back to work. I’ve got my passport ready, I’ll move up a weight class. I’ll do whatever. This one’s at 160 pounds, but I walk around a lot heavier than that. I’ve cut 30 pounds in three weeks before, so I’ll take anything from 155 to 180. Let’s go.”

With major kickboxing promotions like GLORY and Lion Fight blowing up on a global scale and cross-promoting across different continents, there is a lot of opportunity for those that aren’t interested in the grappling aspect of the fight game. Moss is fortunate that Sims and the Paramount MMA team have him on this card. He can only go up from here.

“I’ve been through the ringer, you know,” said Moss. “I’m a veteran. I’ve taken some bumps and bruises, but I’m going to move forward. I’m just focusing on striking, and I think I can really make a statement this year. I’m going to win some big fights, and I know I hit hard.”