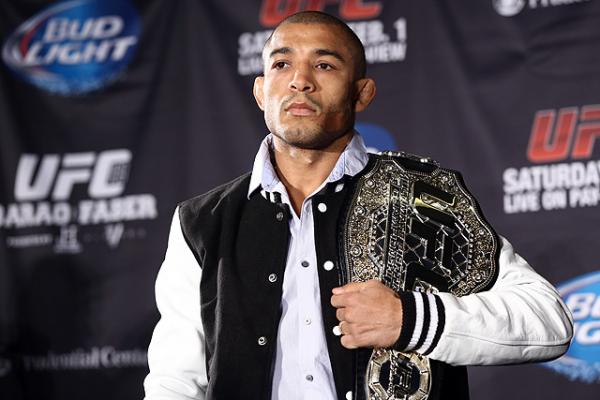 UFC 189: A Jose Aldo Loss to Conor McGregor Is a Win for the UFC

The UFC has had some tough times recently when it comes retaining its champions. In the last two years, the UFC has lost three of its most dominant and longest reigning titleholders in Anderson Silva, Georges St-Pierre and, most recently, Jon “Bones” Jones. These champions have helped shape the modern mixed martial arts world as many fans know it, so it comes as no surprise that the UFC is prepping someone to take their place. Someone with charisma and gusto. Someone who will thrive as a champion and will sell out pay-per-view after pay-per-view. That man fights at UFC 189 on July 11, but his name is not Jose Aldo, the current featherweight champion. Instead, his name is “The Notorious” Conor McGregor.

Let’s face it. The UFC has been building up to this fight since the day that McGregor made his Octagon debut. His stage presence is unquestionably unique. His mouth is brash and bold. The UFC actually helped promote a six-part series called Notorious. It seems as though the company is prepping its seven-time defending featherweight champion Aldo for failure and making way for McGregor. But why would the UFC do that to one of its most dominant champions? The answer is actually quite simple: McGregor is Chael Sonnen 2.0.

Everyone remembers Sonnen right? As a fighter, Sonnen was a man who had a way with words that was uncharacteristic of any modern-day fighters. He essentially talked his way right into a title shot against a man many considered — and still consider — to be the greatest of all time. He made promises that he was going to defeat Anderson Silva, the reigning middleweight champion at the time, at UFC 117. Those were promises that many fans wrote off as words of a lunatic, another fighter who the great Anderson Silva would add to his win column with ease. But Sonnen gave Silva the toughest fight of his entire career. He took Silva down at will and scored with some beautiful ground-and-pound before getting submitted with less than two minutes left in the fifth round. Sonnen went on to defeat Brian Stann and earned another shot at Silva at UFC 148. He was stopped much sooner the second time around and that was the end of that.

McGregor will fill the same shoes Sonnen filled as an outspoken self-promoter who can sell fights with both his words and his performances.

Fans want to hear what McGregor has to say. They want to know what he is doing. At a press conference back in March — in Dublin no less — McGregor physically snatched the title belt from Aldo and proclaimed himself as the “King of Dublin.” It was unprecedented and the fans ate it up.

McGregor has been disrespectful, cocky and arrogant toward the current champion. And fans are watching. He is filling seats and cashing checks. McGregor is exactly what the UFC wants.

There have been a dozen or so commercials leading up to UFC 189 for the past few months, completely overshadowing a heavyweight title fight at UFC 188 in Mexico between Cain Velasquez and Fabricio Werdum. Promos were running long before UFC 187, and it wasn’t until the broadcast of UFC 187 that casual fans even knew that the next pay-per-view was not Aldo vs. McGregor.

The UFC is having to rebuild its champions, and what better time to set up the most brash one yet. When the UFC put a lot into the “Welcome to the Show” campaign, coinciding with Anthony “Showtime” Pettis’s title defense against Rafael dos Anjos, its plans backfired. The UFC was expecting Pettis to be one of its golden boys, especially since Pettis was the first mixed martial artist to be featured on a Wheaties box. Now the UFC is on round two with McGregor.

A lot is at stake. If Aldo is successful and defeats the outspoken Irishman, then the UFC will experience a case of déjà vu. Aldo has received less coverage for this fight than any other champion with his amount of exposure. The UFC is building Aldo to lose, and McGregor will reap all of the benefits.

Take a look at some of the UFC’s current champions. Aldo, Ronda Rousey, Demetrious Johnson and Chris Weidman have defended their belts at least three times. Champions such as Velasquez, Daniel Cormier, Robbie Lawler, dos Anjos and T.J. Dillashaw have only defended their belt once or twice, if at all. Furthermore, the UFC has a flyweight champion who is struggling in the marketing department. The welterweight title has changed hands twice in the time since St-Pierre walked away from the sport, and the future of the light heavyweight division currently resides in the hands of Cormier.

McGregor is the future of the featherweight division. He is the one the UFC wants as its champion and star. He’s the one the promotion will secretly be pulling for at UFC 189.