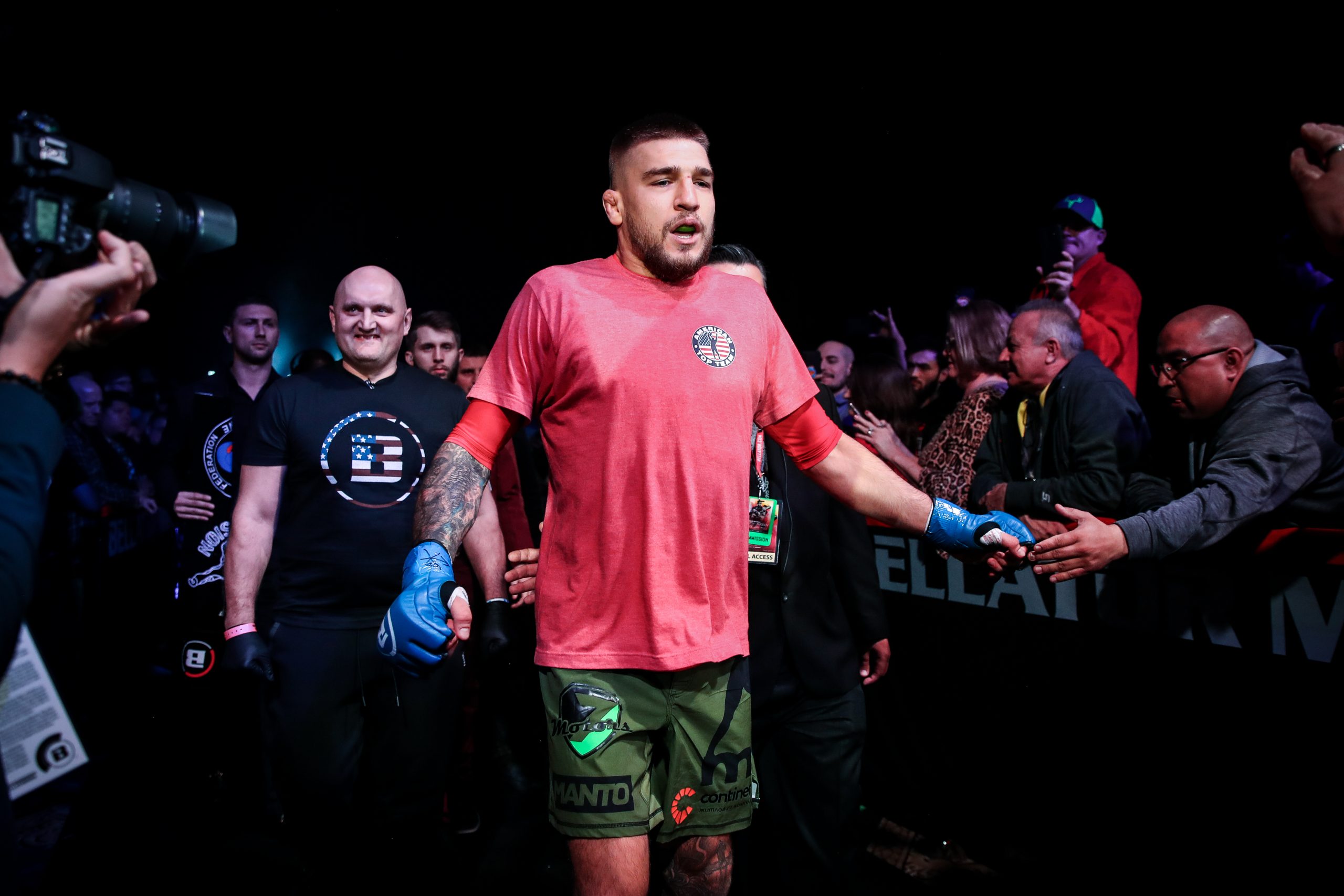 Will Yaroslav Amosov Make His Case as the World’s Best Welterweight?

Yaroslav Amosov became the Bellator MMA welterweight champion after he dominated Douglas Lima at Bellator 260 and extended his perfect record to 26 wins and no losses. He has the best record of all active professional MMA fighters.

Amosov has built his success on his elite grappling, a product of his combat-sambo background. This has caused fans to draw parallels with former UFC lightweight champion Khabib Nurmagomedov. Much like Nurmagomedov, Amosov also has a solid striking game which is defensively secure and perfectly complements his grappling.

With this incredibly strong start to his elite-level MMA career, Amosov seems well set to eventually make his case to be the best welterweight in the world. The 27-year-old has already defeated two fighters who were considered to be tough stylistic match-ups for him.

The first of those fighters was Ed Ruth, a three-time NCAA Division I national champion wrestler who possessed a size advantage over him. Two of Ruth’s wrestling titles were won at 184 pounds, and he once competed at 192 pounds in a catchweight bout in MMA.

In spite of this, Amosov was able to dominate Ruth for large parts of the contest. He stopped most of the American’s takedowns. In the few instances when he was grounded, Amosov managed to get up straight away. He was the superior striker, out-landing Ruth on the feet. He also secured some takedowns of his own. Ruth got Amosov’s back on a couple of occasions, but the Ukrainian was able to escape fairly quickly both times. Amosov displayed tremendous endurance to continue pressing forward and landing strikes late in the fight despite being involved in several physically demanding wrestling exchanges. He secured the unanimous nod on the judge’s scorecards.

Amosov followed up this victory with a first-round stoppage of Mark Lemminger. At this point, Amosov was 5-0 in Bellator and close to title contention.

His next opponent was Logan Storley, an NCAA Division I All-American wrestler. Storley was undefeated in his MMA career and is a talented grappler, but he has inferior wrestling credentials compared to Ruth and had never been a national champion at the collegiate level. This, combined with his smaller stature, led many to believe that Amosov would have an easier fight ahead of him. This would not prove to be the case.

Storley almost immediately shot for a takedown. Whilst his attempt was stuffed, he was successful in putting Amosov on his back foot. Storley was not able to secure takedowns, but his activity and attacking intent appeared to have won him the round. Some incredible scrambles played out between the two men in the second frame.

The momentum of the fight seemed to change following a scramble that ended with Amosov attempting a D’Arce choke. Storley was fatigued, and Amosov started to find his target with regularity. Storley’s output seemed to stop almost completely in the third stanza, but he showed resilience to continue marching forward. He managed to get Amosov down and took his back, then locked in a rear-naked choke. The combat-sambo world champion escaped the hold despite being visibly fatigued, displaying immense grit and determination. Amosov prevailed with a split decision on the judges’ scorecards.

The man who is the standard bearer for all 170-pound fighters and whom Amosov would want to emulate is current UFC champion Kamaru Usman. Usman’s feats in the UFC have not only put him in the list of all-time great welterweights, but also in the overall conversation of the greatest fighters of all time. The Nigerian-born fighter has amassed a stunning 14-0 record inside the Octagon and has defended his title four times. Not only has he reigned supreme over what is one of the most stacked weight classes in the UFC, but he has done so with relative ease. The 34-year-old has never been taken down in the UFC despite facing several elite grapplers and has only been dropped once. He entered the UFC as a high-level wrestler but he has developed his striking to such an extent that he is now one of the most complete fighters in the world. His striking improvement was on full display at UFC 261, where he repeatedly beat Jorge Masvidal to the punch before viciously knocking him out in the second round.

Amosov clearly has a tough task ahead of him to reach Usman’s level. The 27-year-old has already shown more vulnerability in Bellator than what Usman has in the UFC. He has been taken down on a few occasions and has almost been submitted. However, it could be argued that unlike Amosov, Usman’s wrestling has not yet been tested by a fighter with an elite wrestling pedigree. When he did come up against a fighter that most closely fit this description in Colby Covington, the entire bout played out on the feet, much to the surprise of fans.

In Amosov’s quest for recognition, a significant hurdle he is likely to face is the lack of depth in Bellator compared to the UFC. Whilst there are several world-class welterweights at the peak of their powers in the UFC, the same cannot be said in Bellator. Michael “Venom” Page presents a difficult puzzle for all his opponents with his accurate, unorthodox striking, but he has been criticized for his relatively weak strength of schedule.

A rematch with Storley would be the most intriguing fight for Amosov. It would be an opportunity for him to showcase his improvements since their first bout and get a more convincing win over the American. Beyond that, there appears to be a scarcity of opponents who would elevate Amosov’s profile.

The Ukrainian will therefore likely need to join the UFC further down the line in order to get the chance to be considered as the elite competitor in his weight class. Michael Chandler established himself as the best lightweight in Bellator over many years before signing with the UFC in 2020. In the space of two fights, he challenged for the UFC lightweight title and used the UFC’s platform to increase his profile, becoming a widely recognized name in the MMA community.

If he were to clear out the welterweight division in Bellator, Amosov would open up a possible move to join the UFC and do the same there. Given the unpredictable nature of the sport, it is not a foregone conclusion that Amosov will be able to make several defenses of his Bellator title. However, given his immense talent and the lack of depth in the Bellator welterweight division, it would be a surprise if he was unable to do so.

Amosov is ironically in a position in the MMA space where Usman found himself not long ago. “The Nigerian Nightmare” captured the title by dethroning a long-reigning champion, but he continued to receive criticism for a perceived boring fighting style and an inability to finish contests. Usman was also viewed as someone who lacked charisma and personality. Whilst this will be a harder obstacle for Amosov to overcome since he does not yet speak English, showcasing his personality will be a step toward getting the recognition that his ability merits and will increase his earning potential.

Amosov has the physical and technical attributes to be a long-reigning champion in Bellator. He has already overcome difficult stylistic match-ups and, at the age of 27, his best years are ahead of him. Only time will tell whether he has what it takes for the MMA world to consider him as the best welterweight on the planet.