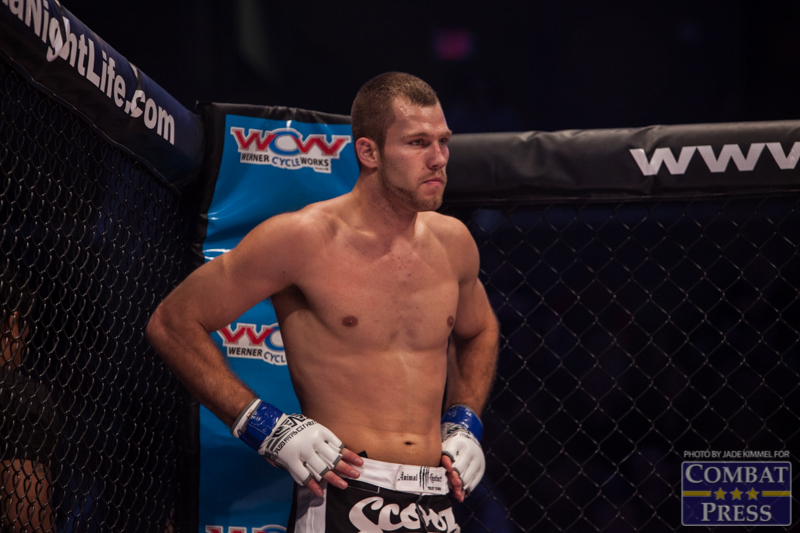 The journey through life is often met with uncertainties, hardship and adversity that shape who we become.

If you asked Wayne Sullivan where his journey would have ended without finding MMA, he would tell you he would be dead or in prison.

While Sullivan had built a reputation for being a bad boy, his efforts didn’t go without consequence. At one point, he had been suspended 14 times for fighting at school.

At the tender age of 17, Sullivan became a father and his perspective on life shifted, “God blessed me with a beautiful baby boy. [It] made me do a complete 180 because I wanted to be a positive role model in my sons’ life because my father was never around.”

Sullivan welcomed another son in early 2015, which fueled his desire to succeed.

Determined to be a successful father, Sullivan sought apprenticeship as a steam fitter through the Local Union 464 in Omaha, Neb., in an effort to become a journeymen. He expects to be done by the end of 2015.

Along the way in securing a future, Sullivan stumbled upon MMA. He first competed in January 2013 where he won via TKO in the opening minute. Months later, his second bout was over in 22 seconds and his third fight ended via TKO in round 3 – the first time Sullivan went past the opening round. Sullivan’s intentions in the sport became very clear, he wanted to win and win dominantly.

MMA became an important aspect in Sullivan’s life, “MMA settled me down. Now, if someone gets in my face, I’m chill… I have self-control.” Something Sullivan admits he lacked in the past.

Sullivan first tasted defeat in late 2013, but was able to rebound with a win in early 2014. However, after two more bouts in 2014, Sullivan found himself on a two-fight losing streak. While he is willing to admit he has flaws, he says the freezing weather and icy canvas didn’t help him last September.

“I would love to rematch Jacob Keifer because we all know if the weather circumstances were different in our fight, and the match would have gone a completely different route than what it did,” proclaimed Sullivan. “My last fight was good, but there is always more things I can work on and fix.”

Despite consecutive losses, Sullivan isn’t the least bit concerned, “Honestly, I don’t feel any pressure at all. After having my second son and taking a break, I feel rested and ready to get in the cage and do what I do best.

“All I can do is continue to better myself and do what I am taught.”

Those teachings have come by way of Premier Combat Center in Omaha, where Sullivan says he has learned valuable lessons. Just a few short weeks ago, Sullivan was faced with a harsh reality when he learned his Brazilian Jiu-Jitsu coach had passed away.

“The best lesson that I have learned while competing in MMA is that you can never learn enough. There is always more to master and understand in this sport.”

In effort to satisfy his coach’s honor, Sullivan intends to make a statement at VFC Fight Night. The Nebraskan has a goal in mind, “Compete for the VFC amateur belt in the future and become the new face of VFC.”

Although Sullivan plans to fight professionally at some point, he’s not in a hurry. “I want to perfect my craft and work hard on advancing my talent. I want to fight my heart out and see where it takes me,” he explained. “After I graduate from my Local 464 apprenticeship, I plan on spending more time in the gym. Once I feel comfortable then I will take the next step and become pro.”

Until that time comes, Sullivan will continue his journey of bettering himself, his skills and being a positive role model for his children.