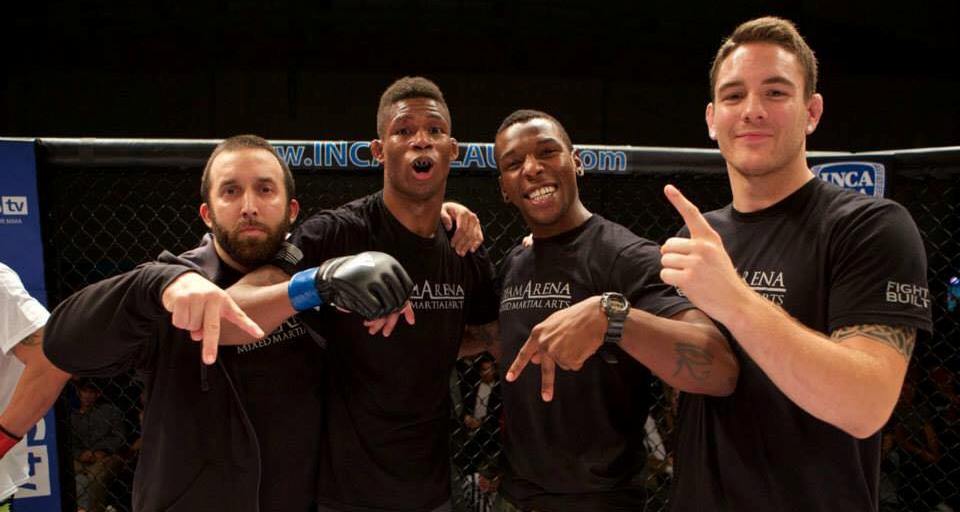 RFA 25’s Sam Toomer: From the Field to the Cage

Just like any other sport during its rise, mixed martial arts is organically adapting and shaping itself for the newest breed of athletes. Unlike other sports, there isn’t really a feeder system for youths transitioning into MMA. Baseball has the little leagues, football has Pop Warner, and golf even has the Junior PGA. MMA has nothing of the sort. Because of that, most fighters come from various backgrounds in specific combat proficiencies.

Wrestling, kickboxing and jiu-jitsu are the most common backgrounds for MMA athletes, but with the availability of high-level schools all over the country, athletes from other non-combat sports are getting into the game, some with great success.

“Super” Sam Toomer grew up in Mississippi until age 10, before moving out to Brawley, Calif. In his youth, he played just about every sport imaginable, but he found the most success as a football player. He eventually landed at Missouri Valley College, where he played cornerback and kick returner.

At age 22, Toomer went back home and to what is now Victory MMA in San Diego at the encouragement of a friend. Little did he know that this experience was going to shape the next chapter of his life.

“I had a buddy out there that asked me to train with him, and, of course, he beat me up,” Toomer told Combat Press. “I just wanted to beat him up for once, so I just kept training, got better and eventually tapped him out. It all took off from there.”

And took off it did. Now 27 years old, Toomer is 9-0, with one no-contest, as a pro and he has trained with the likes of Dean Lister, Myles Jury, Fabricio Camoes and Jeremy Stephens. He has three knockout wins and three submissions, and has only been to decision twice. Now, just 10 fights into his career, Toomer is already in line for a shot at the Resurrection Fighting Alliance featherweight title.

Toomer’s last two fights have taken place under the RFA banner, and his last fight ended in a majority decision. He would have liked to have finished his opponent, but it wasn’t in the cards for him.

“I went into my last fight with an injury, so my biggest takeaway was ‘don’t fight injured,’” Toomer joked.

That last win over Altair Alencar set Toomer up for a shot at Justin Lawrence, former contestant of The Ultimate Fighter reality show and current RFA featherweight champ. Toomer’s primary gym is The Arena in San Diego, but he has added in some special preparations for the biggest fight of his young career.

“I’ve been going back and forth between [Cub] Swanson’s gym and my gym in San Diego,” Toomer explained. “I’m just doing a lot of technical stuff with Swanson and some cardio and elevation training too.”

When most people think of Swanson, they automatically associate him with Greg Jackson in Albuquerque, N.M. However, the fifth-ranked UFC featherweight owns his own gym, TRU-MMA, in Indio, Calif. If there’s one featherweight that would be good for Toomer to align himself with, it’s the veteran Swanson.

Even in preparing for a huge title fight, Toomer holds down a job to keep his head above water financially. While some fighters choose to live off the sole support of others, Toomer grew up with a hardworking mother who supported four children with up to three jobs at a time. There is no way he is going to sit by without taking care of his own needs.

“When I’m not training, I’m working part-time as a nursing assistant,” Toomer elaborated. “When I first came back from Missouri, my wrestling coach out here back at Victory got me a job there so I could support myself and keep fighting.”

In addition to his job at Sharp Memorial Hospital in San Diego, Toomer spends his downtime running, gaming or just hanging out. Mentally, his focus is always on capturing that belt from his opponent.

Lawrence is a pretty polarizing figure. On The Ultimate Fighter: Live, he was by far the youngest competitor, turning 22 years old while the show was actually airing. At the time, he was only 3-0 as a pro, but he was one of the tougher competitors, getting beat in the quarterfinal round by eventual season winner Michael Chiesa. In his now 6-2 career, he has only stopped two opponents, one by knockout and one by submission, despite being a Golden Gloves and kickboxing champion. Even with his opponent’s pedigree, Toomer is confident he will walk away with the belt.

“It’s kind of weird to say it, but I don’t think he has an advantage,” said the Mississippi native. “I don’t see it. His experience is an advantage.”

Toomer is a mixed martial artist, through and through. He doesn’t have any specific training in just grappling or just striking, and he feels that is his biggest advantage Friday night as he enters the cage at RFA 25, live from the Sanford Pentagon in Sioux Falls, S.D.

“I started in MMA,” Toomer intimated. “I don’t have a background in boxing or kickboxing or wrestling or anything like that. I learned MMA all at once.”

Toomer is the new breed of MMA fighter. He is a football player that stumbled onto the sport through a friend, and he has since been very successful in his short career. His hard work will all come to fruition Friday night when he faces Lawrence for the RFA featherweight title, live on AXS TV.

Toomer would like to thank his coaches and training partners at The Arena and TRU-MMA, and his family and his friends for supporting him throughout his journey. He would also like to thank his sponsors: Bana Nutrition, Mentom Eyewear, DBH, Be First, Iridium Sports Agency, and Upgrade Marketing. Follower Sam on Twitter: @SuperSamToomer
Advertisement