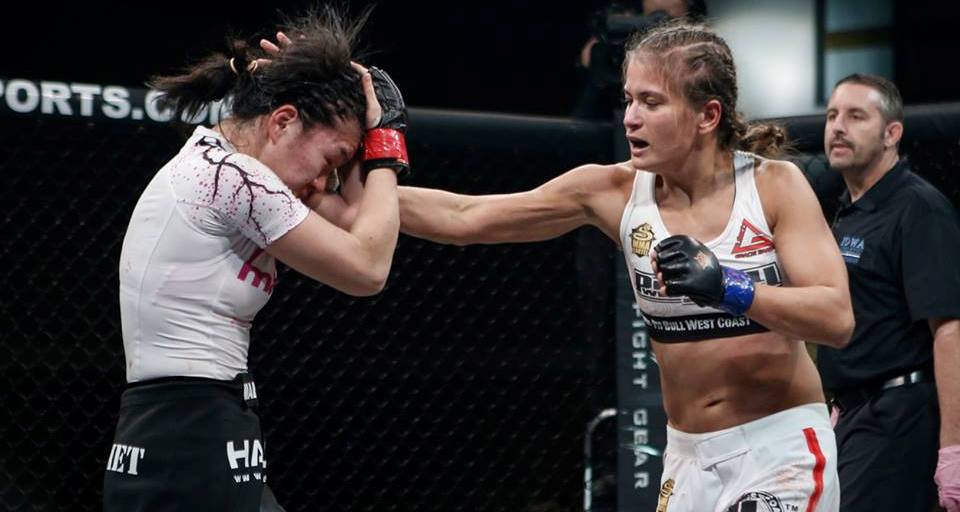 Smoldarev and Perak can count themselves among the victims of M-1’s reigning heavyweight champion, Marcin Tybura. Tybura used his third-round TKO victory over Perak as a launching pad to a title shot against Damian Grabowski, from whom Tybura claimed the crown. Smoldarev faced Tybura in the champ’s first title defense and fell short when he was submitted via a first-round rear-naked choke. Smoldarev and Perak have not fought since their respective losses to Tybura, leaving Perak with the much longer layoff.

Smoldarev can count his failed title bid as the only black mark on an otherwise stellar record. The towering 24-year-old turned pro in 2009 and reeled off nine straight wins, including seven stoppages. The Estonian has only faced three sub-.500 fighters in his career. He has trained in judo since the age of 12 and rose through the M-1 ranks by winning the M-1 Selection Grand Prix and advancing to the semifinals of the 2013 M-1 Heavyweight Grand Prix. Sometimes referred to as “The Brock Lesnar of Estonia,” Smoldarev has four wins by some form of knockout and three by way of submission.

The 32-year-old Perak has a much longer resume, dating as far back as 2005, when he made his pro debut with a first-round TKO victory over Rok Merkus. The Croatian fighter went on to win his first 12 fights and remain undefeated through his first 13 outings. He suffered his first loss in 2008 to Jan Blachowicz. After another five wins, Perak dropped another fight, this time by split decision against Jordan Radev. He went on a three-fight winning streak before suffering a loss to Jeff Monson and posted another three wins before his loss to Tybura. Monson and Radev were already UFC veterans when they topped Perak, and Blachowicz would later sign with the world’s top promotion. Perak boasts notable wins over Travis Wiuff, Miodrag Petkovic (twice) and Bob Sapp. He has 12 wins by some form of knockout and seven by way of submission.

Perak’s 28-fight career gives him the experience edge over the younger Smoldarev, but Perak’s best showings have come against middling veterans like Wiuff, Petkovic and Sapp or competitors that even the most dedicated fan would not recognize. His losses, meanwhile, piled up against competition that has graced the Octagon or has a good shot of competing in the UFC in the future. Perak is a smaller heavyweight who will give up five inches to Smoldarev in the height department and 40 pounds on the scale.

Combined with his size, Smoldarev’s judo base should allow him to rag-doll Perak to his heart’s content. The young prospect has also demonstrated that he can end fights in a hurry once the action goes to the canvas. His last two victories account for less than two minutes of ring time and include a 38-second armbar finish and a 79-second kimura submission. The 24-year-old will use his size to his advantage and dominate Perak in this clash of heavyweights. Perak isn’t an easy out — he has only been stopped twice and lasted to the third round in his TKO loss to Tybura — so Smoldarev might need all three rounds to wrap up the win. If Smoldarev can’t find a way to finish Perak, he’ll have to settle for a one-sided decision instead.

KSW may be shining the spotlight on welterweights Borys Mankowski and Michail Tsarev in the promotion’s 30th offering, but fans should be paying just as much attention when strawweight ladies Karolina Kowalkiewicz and Kalindra Faria clash a little earlier in the night. There may not be gold on the line — Kowalkiewicz is the promotion’s strawweight champion, but this is listed by KSW as a non-title affair — but both ladies have the potential to advance one step closer to a UFC contract or Invicta title shot with a win.

Faria is coming off a failed bid for the World Series of Fighting title in a valiant effort against champion Jessica Aguilar. She pushed the champ to a five-round decision, but Aguilar showed superior striking and takedowns. The Bronx’s Gold Team fighter had her 11-fight winning streak snapped by Aguilar. The Brazilian’s other losses came to Vanessa Porto, Claudia Gadelha and Carina Damm. She fought to a draw with Jennifer Maia and has defeated the likes of the aforementioned Damm, Aline Serio (twice) and 8-2 prospect Laura Balin. The 28-year-old has picked up six wins by some form of knockout and four by way of submission.

With her most recent win, Kowalkiewicz became a frontrunner for a shot at Invicta strawweight champion Katja Kankaanpaa. The Polish fighter impressed in her Invicta debut against Mizuki Inoue. She edged Inoue on the feet and fended off the Japanese phenom’s ground game. The victory added to a resume that already featured wins over Simona Soukupova and Jasminka Cive. The Gracie Barra Lodz fighter remains perfect through six fights and has stepped up to face a gauntlet of tough competition. The 29-year-old has gone the distance three times, picked up two submission wins and, in her 2012 pro debut, scored a first-round TKO.

These two prospects had a lot to prove in their most recent affairs, and both left lasting impressions. Faria may have faltered, but she did so against one of the division’s top two fighters. Kowalkiewicz may have only eked out a split verdict, but she too faced an opponent who is considered to be among the very best the 115-pound division has to offer. These ladies entered the cage as relative unknowns whose records were built in regional promotions, but they proved they aren’t simply overrated prospects.

Faria was a game opponent against Aguilar, but her failure to mount any significant offense in any area is troubling. Kowalkiewicz isn’t as dominant as Aguilar, but she does have the skill set to give Faria headaches. Furthermore, the Brazilian lost in her first venture away from her homeland, and now she’ll be dealing with an even longer trip that’s more likely to factor into her performance.

Faria had a significant height edge and a small reach advantage against Aguilar, but she couldn’t make it work. She won’t enjoy those same advantages against her Polish counterpart. Kowalkiewicz will benefit from several inches in reach over Faria, and she checks in at nearly the same height as her adversary. If Kowalkiewicz was able to gain the upper hand against Inoue, a fighter with a karate background and excellent grappling skills, then she should be able to do the same against Faria.

This should be a close fight, but Faria will have a hard time overcoming the impact the travel will have on her. Kowalkiewicz will emerge from this encounter with the decision victory.

Twenty-one years old, nine wins and a BAMMA featherweight title. That’s not a bad start to an MMA career. Tom DuQuesnoy has already made a name for himself on European shores and he’ll look to further his career with a title defense against Krzysztof Klaczek. The bout takes the headlining slot on the 18th offering from BAMMA.

DuQuesnoy has an incredible amount of potential. The Frenchman is a five-time combat sambo national champion. He has displayed patience and a well-rounded game in his MMA career. The “Fire Kid” made his pro debut in 2012 and won his first four fights before running into Makwan Amirkhani, who submitted DuQuesnoy. He rebounded with five straight wins. His last outing against Ashleigh Grimshaw ended in a no-contest after 11 seconds due to an accidental groin strike. DuQuesnoy, who fights out of Crossfight, honed his skills in 2014 by spending time at Nova Uniao, Xtreme Couture, Jackson’s MMA and other top gyms. He has four wins by some form of knockout and three via submission. He is a well-rounded fighter who can beat opponents standing or on the mat.

Klaczek is a 25-year-old Shooters Konin product from Poland. He made his pro debut in 2011 and went 3-2 over his first calendar year in the sport. He has been much less active in the following years, never exceeding two appearances a year. He is on a five-fight winning streak that includes three stoppages. His three most recent victories came against opponents who currently possess winning records. He has finished two opponents with strikes and three with submissions, but he has also suffered one loss by way of submission.

The records might be similar, but that’s where the comparison should end between these two. Whereas DuQuesnoy is a dynamic mixed martial artist whose only loss came to a guy who delivered a highlight-reel knockout in his UFC debut, Klaczek is a fighter who struggles on the mat and suffered a 20-second submission loss to a fighter who now holds a 4-5-1 mark. Klaczek did win a majority decision over Jay Furness in his most recent outing, but the Polish fighter struggled to fend off takedowns in the opening stanza, lost position in scrambles and remained largely inactive when in top position.

DuQuesnoy can probably take down Klaczek at will, and he’s certainly capable of advancing to dominant positions or slapping on the fight-ending submission once the fight hits the floor. This is a title defense for the 21-year-old, but it should also be a showcase fight. The champ should have very little problem disposing of the latest challenger to his throne. DuQuesnoy by first-round submission, unless he opts to draw this out for the experience it provides.