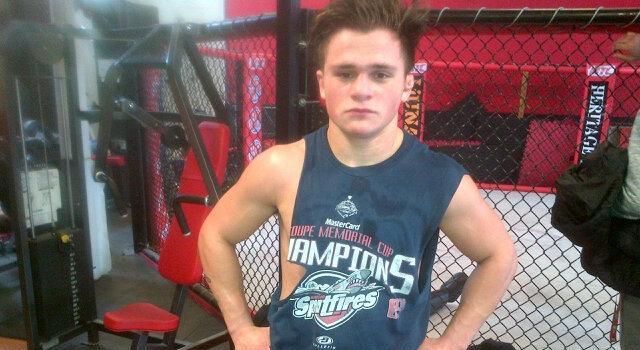 At 17 years old, and having already put together a well-rounded skill set, T.J. Laramie is gaining knowledge and experience at home and abroad as he prepares for the next step on his journey to the Octagon.

Laramie, who makes his professional debut in March in Japan, holds an amateur MMA record of 1-0. The Windsor, Ontario, Canada native is also a three-time Grapplers Quest winner (No-Gi and Gi), an Ontario Open (No-Gi and Gi) winner, a two-time runner-up in All-Ontario Wrestling, a runner-up in Absolute Grappling and an Under-17 153-pound IKF Kickboxing world champion.

Did I mention that he is still in high school?

High school students are full of aspirations, but Laramie’s dreams are becoming more of a reality every day. He has narrowed in on a path upon which he will reach his end goal.

“I know I’m not getting to the UFC right away, and I can’t be on The Ultimate Fighter until I’m 21, so I can’t take that route and I don’t think that route is an option because I plan on being there before I’m 21,” Laramie told Jason Kelly and Joe Rizzo on Rear Naked Choke Radio. “The Bellator route would be [for] the money right now, but it also gives me an opportunity to fight for GLORY. I want to fight kickboxing, too. There’s a lot of money in the tournaments there. The beginning part of my career is about getting good fights, making some money and getting some good exposure and a name. Then, when I hit 20 years old, then I can start directing my eyes to the UFC.”

The next stop for the Maximum Training Centre product is a reality show that will take him to Japan. Laramie, along with two other Canadian up-and-coming combatants, will begin filming for a reality show entitled Fight Xchange in February, when three Japanese mixed martial artists visit the Great White North. Following the time spent in Canada, all of the fighters will fly to Japan, where Laramie will make his pro debut.

“It’s going to be a single fight after the three-week period of training,” Laramie explained. “They’ll match me up just like any other show, against someone with a similar record — probably someone with no more than four fights — like a 2-2 record, 0-1 or 1-0, something like that.”

The management team behind most of the pro fighters in Laramie’s gym brought the opportunity to his head coach, Rino Belcastro. After speaking with producers of the show, all parties decided it was a great opportunity. Not only will Laramie be able to further his career, but his best interests are also being considered: he will be provided with a tutor when he’s overseas to ensure that his schoolwork will not suffer.

Laramie has no immediate intentions of enrolling in college after high school, but he realizes the importance of attaining his high school diploma before embarking on a promising career in combat sports.

“I’m going to focus on my career and fighting,” Laramie said. “To me, fighting at an elite level requires all of your time. I think focusing on two things will just make it harder.”

Laramie expects to compete in the bantamweight division, but he will make his pro debut as a 145-pounder. Seeking guidance from fighters who have endured weight cutting in Japan has led Laramie to make intelligent decisions as he heads into his inaugural professional MMA bout. Those same fighters are also the ones he’s recently looked to as he evolves from a kickboxer and grappler to a mixed martial artist.

“I’ve started working with some of the better guys like Sam Stout [and] Chris Horodecki,” Laramie said. “I’ve been focusing more on just MMA. Just sparring. It’s definitely different combining everything together. You might be good at one thing, but mixing it together with something else changes it big time.”

Fighters such as UFC veteran Stout and Bellator vet Horodecki can provide ample insight on the fight game, both inside and outside the cage. Horodecki was praised for his martial arts abilities from a young age, therefore he can shed light on what Laramie can expect during his early years within the sport. Other Canadian fighters like UFC welterweights Rory MacDonald and Jordan Mein were also in a similar position as they escalated toward the UFC. However, as good as those men performed, the Windsor native is reluctant to follow the same trail.

“For me, it’s all about taking the right fights and working my way up so I can get the best opportunities possible,” Laramie explained. “I think a lot of people, especially like Jordan Mein, if you look at his record, he took a lot of losses early on. I’m not looking to do that; I’m looking to build my way up. I think Rory MacDonald kind of did the same thing, taking that Carlos Condit fight so early in his UFC career — it was kind of a bad option. I just want to take the right fights and build my way up. When the opportunity comes to make my way up and fight bigger competition, it’s going to happen.”