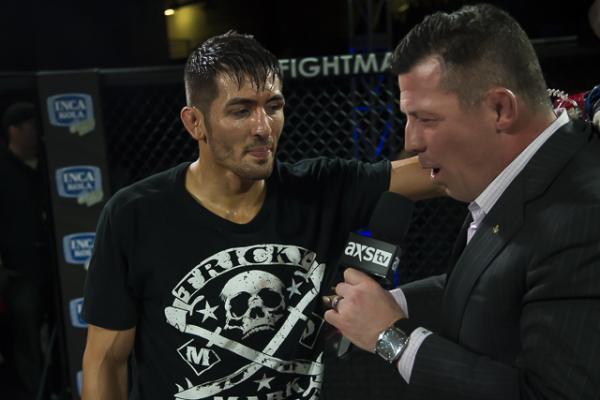 While everyone else was gorging themselves on Thanksgiving dinner or enjoying Christmas ham and fudge, Resurrection Fighting Alliance’s Mark Dickman was in training camp for his next fight, a co-main event battle at RFA 22 against world-traveler Donald Sanchez in Colorado Springs, Colo., on Friday. It’s nothing new for Dickman. It’s so routine, in fact, that the holidays are just another time of the year for him.

“I am use to doing a training camp during the holidays,” Dickman confessed to Combat Press. “So it’s kinda low key for me. Having wrestled my whole life, the holidays are kinda the same. I really don’t party or eat a lot or get too crazy over the holidays. They were pretty chill otherwise.”

It’s all part of the bigger plan for Dickman. This will be his sixth fight for the promotion, and he feels that this is the road to the big show.

“[The RFA] are a good stepping stone — a good springboard to the next level. If you can’t make it there, you are probably not going to make it to the next level,” Dickman explained. “I think that they are really trying to push me and promote me, so that always helps.”

The journey to make it to the big show has been a long one for Dickman. He has wrestled for pretty much his whole life, but mixed martial arts was not a quick find for him.

“I was student teaching out of high school. I did it for six months and I hated it,” Dickman recalled. “I tried coaching, and I really didn’t like that either as much. The problem was, I still wanted to compete. So, a buddy of mine had a house and was looking for a roommate. He really didn’t charge me anything and that’s what really jump-started my career. I was able to just focus on training and not worry about paying a bunch of bills. I was able to get on a roll and I got some sponsors, and just everything kinda snowballed after that.”

All of the wrestling matches and all the time training came to an apex in August. His opponent that night was Justin Lawrence. The prize, the vacant RFA featherweight title. However, like most success stories, this one features a roadblock.

Dickman’s roadblock happened to be Lawrence, who outworked the 30-year-old Dickman en route to a unanimous decision win. Like most fighters after a loss, Dickman looked at the setback to see what he could learn and take forward in his fight career.

When it comes to his next opponent, Dickman feels that Sanchez will be a tough fight. In the end, though, Dickman’s past experience and what he learned in his last fight will propel him to victory.

“Donald Sanchez is a very seasoned and tough fighter,” said Dickman. “I really think that Raoni Barcelos was my biggest accomplishment. He was a top-10 prospect in the world and I finished him. He had very high-level jiu-jitsu and wrestled on the international level for Brazil, so I think that is a bigger win. I think that this is a good fight for me to stand out. I also think this a perfect match-up for me.

“I think [Sanchez] is going to come forward. On paper, he really doesn’t finish a lot of people, a lot of tough guys. He gets finished by the tough guys. He’s got a good guard, but I think if someone passes his guard he is in trouble. Honestly, I think this a good match-up for me. I think I will surprise him with my stand-up.”

During this training camp, Dickman has had some things click for him when it comes to developing that stand-up game.

“I think boxing and wrestling footwork is about the same,” he said. “Wrestling footwork is a little bit wider, but the footwork for both is the same. One of the things I trained for in my camp, I was a great wrestler on my feet. I was a takedown artist. Now that I have kind of figured out how to translate that same footwork in my wrestling to my striking I think you are going to see a big difference in this fight.”

Despite Dickman’s feelings that his own game is superior to that of his opponent, he did have a few compliments for Sanchez.

“I think he is going to have better coaching in his corner,” Dickman admitted. “He is going to be smarter, be more practical. He is going to have some strategy. I think that’s going to help him. I think this is only the second time with these guys [from Jackson’s MMA], and honestly it takes years to develop that trust with the coaches. But somebody that’s been doing it the way he has been doing for so long, just bouncing around, just feels like he might have just had guys that were training him for free that don’t really know what they are doing like the guys at Jackson’s. So I feel like, I don’t know if it’s going to help him quite yet, but you never know.”

“I am going to finish him. I really feel I can finish him anywhere. I’m really not much for predictions, but I feel overall I am better than him.”