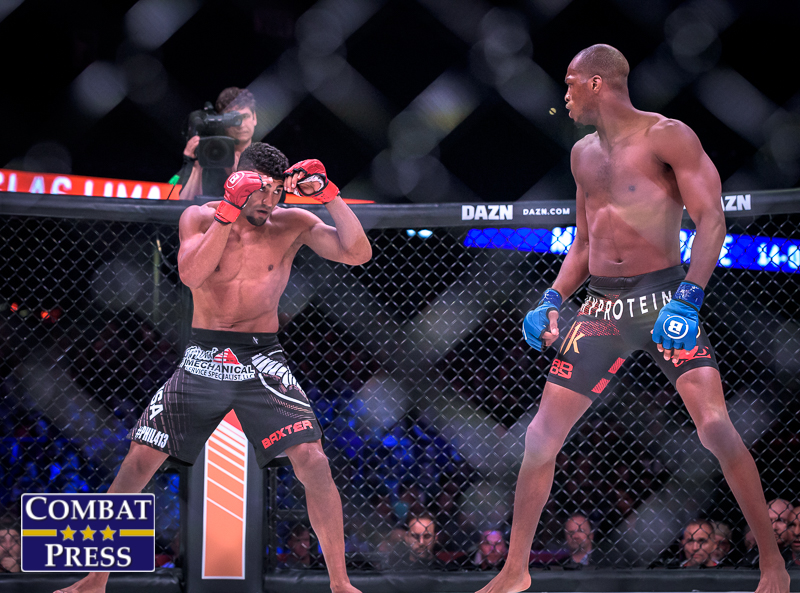 This weekend, Bellator MMA makes another trip to England and the SSE Arena in London.

The main event of the evening takes place in the welterweight division, where Michael “Venom” Page faces short-notice replacement Giovanni Melillo. Page was originally slated to meet fellow Bellator veteran Derek Anderson, but Anderson pulled out for undisclosed reasons. Page now faces a promotional newcomer instead. Melillo has mostly fought on the regional circuit in Europe. He is coming off a victory over Will Chope in his last fight. Page was also victorious in his last appearance, which came in September at Bellator 227 against Richard Kiely.

The co-headliner takes us to the middleweight division. Fabian Edwards looks to remain undefeated when he goes up against Mike Shipman. Both fighters would like to use this fight as a step into contender status after competing on regional Bellator cards for their time with the promotion. Shipman last fought in June, when he was knocked out in the second round by Costello van Steenis. Edwards appeared at Bellator 223 with much different fortunes. He was able to beat Jonathan Bosuku by decision.

With Derek Anderson forced to withdraw from the headliner less than two weeks before the event, Michael “Venom” Page is now set for a short-notice fight against Giovanni Melillo. How different is this match-up for “MVP”?

Very different. This fight went from one where Page had to actually worry about a tough Bellator veteran to one where he’s fighting someone making their Bellator debut.

If Page had faced Anderson, he would have encountered one of the better and more well-rounded fighters on the Bellator roster. Not only could Anderson have been dangerous on the feet, but he could have given Page fits on the ground. If the fight went to the ground, it would have been a huge hill for Page, a striker, to climb.

The change in opponent is both good and bad for Page, who is only two months removed from his last fight. This gives him what should be an easy fight to end the year. It also gives him the opportunity to continue to add knockouts to his record. However, it comes at the price of further watering down his strength of record. Page finally started getting tougher fights and topped Fernando Gonzalez, David Rickels and Paul Daley in successive outings. “MVP” then suffered his first career loss at the hands of Douglas Lima, a former and future champion.

We can expect the same in this fight as we do in any other fight involving Page against an unheralded foe. Venom is going to dance around and land shot after shot on Melillo before making the newcomer succumb to a jaw-dropping knockout.

How important are the remaining main-card fights to the bigger picture in Bellator?

These are important fights for rising prospects who are looking for success in the Bellator cage. You have two guys — Fabian Edwards and Soren Bak — in different fights who can make an impact.

This will be Edwards’ first big test in his young career. He has shot off to a perfect 8-0 start, and Mike Shipman is a good veteran to really test the merit of that undefeated record. Edwards started to compile his perfect mark in BAMMA before fighting three times this year in Bellator. It’s amazing that he will get a total of four fights in this calendar year.

Shipman is another guy who can make an impact, though. He is coming off a loss to Costello van Steenis in June, but he is an entertaining fighter. Shipman’s Bellator fights typically end in the first round. He is exactly the type of fighter you want to see climb the ranks, because he goes for the finish.

Regardless of the outcome between Edwards and Shipman, this fight will have an effect on the middleweight division, which could really use an infusion of talent. It would be nice to see either of these fighters fight abroad after mainly competing when Bellator has visited England.

Then there’s Bak, who has a 13-1 record on the European regional circuit. This will be the first time he gets to shine on a big stage, and it comes against Terry Brazier. Brazieris somewhat of a staple for Bellator’s trips to England. His last two fights have been for the promotion in his home country. Brazier is 1-1 in Bellator, with both contests ending before the final bell. This fight is a jump up in weight class for Bak, who is coming off a victory in the featherweight division.

These fights aren’t totally for the home crowd, and they do provide for some upward mobility for the fighters involved to make a name for themselves in their respective divisions.

Sicilia is a UFC veteran returning for another fight in Bellator. He is 2-2 in the organization, but he is coming off a loss to Pedro Carvalho at Bellator 227. Sicilia has been an exciting fighter so far in Bellator, especially in a back-and-forth victory against veteran Derek Campos.

Whiteford is another UFC veteran, but he has fought sparingly since leaving the promotion. He rides a three-fight winning streak heading into his battle with Sicilia.