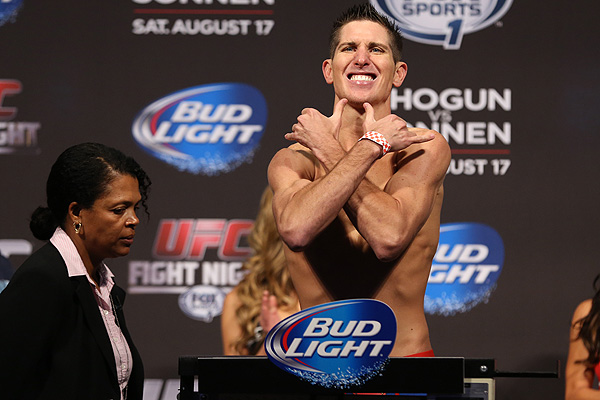 On Thursday, Dec. 18, Titan FC hosted the weigh-ins for its 32nd event which takes place Friday, Dec. 19, from the Tsongas Center in Lowell, Mass.

In the night’s main event, the promotion will crown a featherweight champion as Bellator veteran Desmond Green takes on former UFC fighter Steven Siler. Green made a huge statement in his Titan debut in October, knocking out former WEC title holder Miguel Torres in just 46 seconds. The dominant win moved his record to 13-3. Siler, meanwhile, will be looking to get back on track following a rough stretch that saw him cut from the UFC. The 27-year-old enters the Titan cage with 23 career wins, including 13 via submission.

The co-main event features another match-up that includes a former Bellator combatant and a UFC veteran, as multiple-time Bellator tournament winner Rick Hawn takes on Brazilian Carlo Prater. The 38-year-old judoka Hawn will look to snap a two-fight skid, while Prater will look to put a loss to Carlos Diego Ferreira under the Legacy FC banner in his rearview mirror.

The seven-fight event kicks off with two preliminary card bouts streaming live on CBSSportsNetwork.com at 7 p.m. ET, with the five-fight main card airing live on the CBS Sports Network at 9 p.m. ET.