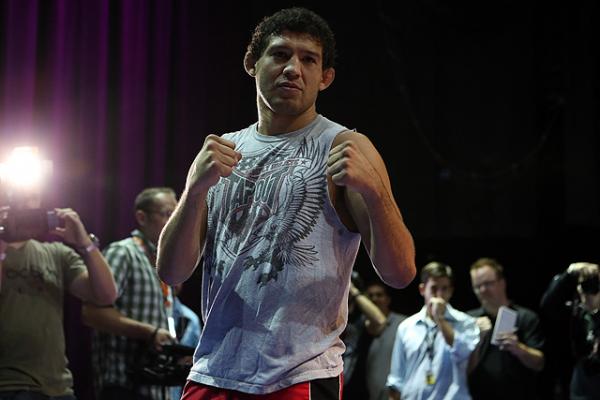 Gilbert Melendez is preparing to fight for the UFC’s lightweight title in December, but how did he get to this point? Let’s look back on the career of the title challenger.

He began his MMA career in 2002 in the WEC, where he happened to win his debut contest inside the first round via stoppage. That was truly when it all began for the Santa Ana, Calif., native. In the first four years of his MMA career, Melendez tore through all comers. His first bout came at WEC 5 against Greg Quan. Melendez looked comfortable and and composed, scoring a TKO win with just 23 seconds remaining in the opening round.

Melendez’s second bout came against Jeff Hougland, who is now a UFC veteran but was competing for just the fourth time when he scrapped with Melendez. Melendez dominated in the wrestling department in the first round before finding himself out-worked on the ground in the second. However, he used the threat of an ankle lock to secure top position and landed heavy blows for the stoppage victory.

Melendez continued to post victories while making stops in promotions such as Rumble on the Rock, Pride and Shooto before signing with Strikeforce in March 2006. He fought and beat Harris Sarmiento in his Strikeforce debut. With the impressive win, Melendez was given the opportunity to fight for the lightweight championship against Clay Guida.

Guida at the time was a veteran of almost 25 bouts and represented Melendez’s toughest bout yet. “El Niño” won a hard-fought split decision to become the new Strikeforce lightweight champion.

On March 29, 2008, Melendez defended the title for the first time. He defeated Gabe Lemley by way of a second-round TKO stoppage.

His next defense would mark the beginning of a rivalry that would endure through Strikeforce’s peak years. In his first fight with Josh Thomson, Melendez lost the Strikeforce lightweight championship in a fight that went the distance.

It took two wins—against Rodrigo Damm and Mitsuhiro Ishida—but Melendez climbed his way to a rematch while capturing the Strikeforce interim belt. In a thrilling fight, the Cesar Gracie product defeated Thomson via unanimous decision to unify the Strikeforce lightweight championship.

Melendez defended his title continuously from 2010 through to 2012, most notably defeating such current UFC talent as Jorge Masvidal and Tatsuya Kawajiri before meeting Thomson for a third time. With his final Strikeforce fight fittingly coming against his arch-rival, Melendez proved to be the superior fighter once again, taking a unanimous decision win to effectively end the rivalry for the time being.

Then came the call Melendez had been waiting for seemingly a lifetime to receive. Zuffa, the UFC’s parent company, had already acquired Strikeforce and employed Melendez under that promotion’s banner, but now Strikeforce was to be folded and the UFC would acquire most of the high-end talent that the company had to offer. This was a special moment for Melendez. He knew there was a great possibility he would not only get his contract but possibly see an immediate title challenge. He got his wish.

After just under a year of inactivity, Melendez made his UFC debut in a world title fight against then-champion Benson Henderson. The fight aired on Fox, which couldn’t have been a better platform for Melendez to show UFC fans who may not have followed Strikeforce what he truly is about as a fighter. He did exactly that, taking Henderson into very deep waters. The fight went to the judges’ scorecards, where many fans felt Melendez’s name would be announced as the winner. However, much to the disappointment of those fans, Henderson came out victorious in a split decision. Nevertheless, it was a strong UFC debut for Melendez.

After the controversial loss, Melendez waited six months before returning to the Octagon in October 2013 to face Diego Sanchez. Melendez won a relatively comfortable decision despite being put in danger by the warrior that is Sanchez.

Melendez then sacrificed some of a prime year in order to film The Ultimate Fighter reality show with current lightweight champion Anthony Pettis. Both the TUF appearance and subsequent fight were the result of Melendez contract negotiations with the UFC. He had accepted a Bellator contract, only to have it matched by the UFC. This will be Melendez’s second shot at the gold in the UFC. It is truly remarkable for him to be fighting at such a high level despite his long tenure in the sport.

UFC 181 goes down on Dec. 6 at the Mandalay Bay Events Center in Las Vegas and airs on pay-per-view. Should Melendez be able to win UFC gold, it would be a huge step in an already incredibly successful MMA career. It would solidify his place in history as one of the lightweight greats of the sport.