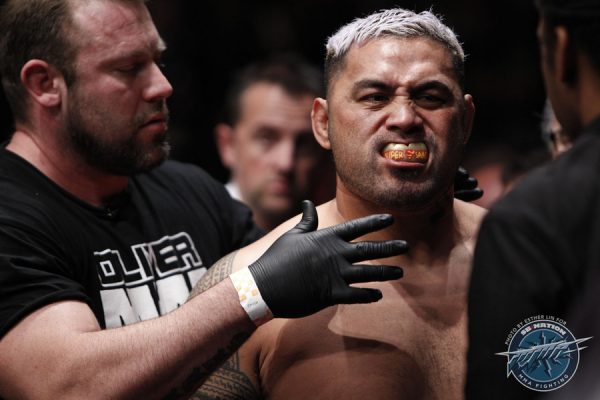 UFC heavyweight champion Cain Velasquez has suffered a knee injury in training and is out of his UFC 180 title defense against Fabricio Werdum on Nov. 15 in Mexico City.

The news was announced by the promotion on Tuesday.

Stepping in against Werdum will be New Zealand native Mark Hunt. The pair will battle for an interim title in the main event of the pay-per-view event.

Hunt enters the contest following a signature, walkoff knockout of Roy Nelson at UFC Fight Night 52 in September. The former K-1 champion has undergone a career rejuvenation over the last three years, going unbeaten in six of his last seven outings. In addition to his knockout of Nelson, the 40-year-old has also stopped Cheick Kongo, Stefan Struve and Chris Tuchscherer inside the Octagon.

“I feel blessed to have this opportunity to fight for another world title. This is something that doesn’t happen often to people. First K1 and now UFC – how can I say no, even though it’s on short notice? I’m dropping everything and flying to Mexico tomorrow so I can best prepare myself for this fight. I have to get into shape and acclimatize to that environment, which is really important.

“There’s nothing to lose when you’re competing against the best at the top level,” Hunt added.

Werdum, meanwhile, will look to cap an impressive return to the promotion with a fifth straight win and a title. The 37-year-old Brazilian was jettisoned from the promotion in 2008, but earned his way back to the promotion with a strong run under the Strikeforce banner. Since his return, Werdum has scored wins over the aforementioned Nelson, Antonio Rodrigo Nogueira, Mike Russow and most recently, Travis Browne.

“I’m ready for whatever comes. I have been training in Mexico for nearly two months and accept the challenge that is presented to me. I’ll continue to prepare and will arrive ready to fight on behalf of all my Latin American fans,” said Werdum.