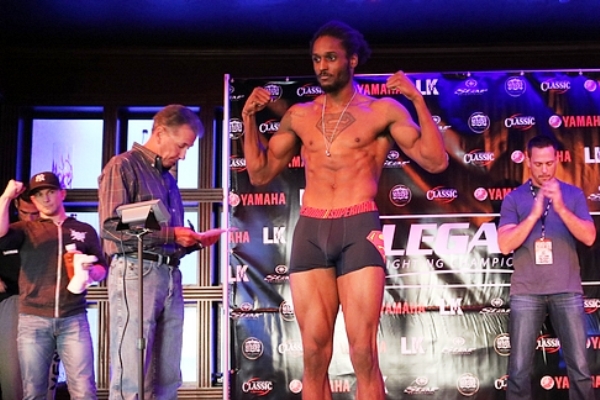 Lex Luthor. Doomsday. Brainiac. Hell, even Batman. These guys all stepped up to fight Superman.

Ryan “Superman” Spann must have been envious. He would have found more fights if he were wearing a red cape and blue spandex instead of trunks and four-ounce gloves.

Spann was toiling away on the regional MMA circuit early in his pro career after going 9-1 as an amateur. Even though Spann won his first five pro fights, including four straight submission wins, he was getting frustrated at the lack of competition. He briefly considered early retirement to pursue other career opportunities.

“I was winning fights as a pro, but [I] had to fight amateurs who were 0-0,” Spann, who now boasts a pro record of 9-3, told Combat Press. “I was getting tired of people not wanting to fight me, and I needed more consistent money.”

Spann’s desire for more competition received a boost when he made his debut with the Legacy Fighting Championship promotion in 2015. Perhaps taking inspiration from the “Superman” nickname that has followed him since childhood, Spann’s Legacy debut against Larry Crowe couldn’t have gone much better. It lasted eight seconds.

“I went into that fight and thought I would finish him in about 30 seconds,” Spann said. “I didn’t want to knock him out — I don’t actually enjoy doing that — but after I did it, I realized I finished him like I should have finished the guy who gave me my first loss.”

Spann’s first loss came on the regional circuit in 2014 when he was quickly dispatched by Brandon Farran. However, his eight-second knockout debut gave Spann a middleweight title shot against Leandro Leite at Legacy FC 48 in November 2015. Spann came up on the short end of a decision loss, but he rebounded with a first-round submission win in his next Legacy fight to receive another title shot, this time at light heavyweight against Robert Drysdale. Unfortunately, Spann was submitted by Drysdale in the second round.

“I beat him up and went longer with Robert than anyone had up to that point,” Spann said. “All my losses have only been in title fights, and it made me realize I’m better than I think I am. I fought a guy with world-class judo and went all five rounds with a guy people thought would beat me up.”

Even if Spann’s two title fight opponents boasted some of the best skill sets in MMA, Spann is definitely no slouch himself. He began training in martial arts when he was just 18 months old, following in his brother’s footsteps and taking part in karate, judo and boxing before training in jiu-jitsu and embarking on his amateur MMA career.

What had been a problem early in Spann’s career turned into a non-issue once Spann joined the Legacy organization.

“[Legacy] worked real hard to find me guys to fight,” he said.

At the beginning of 2017, Legacy merged with the Resurrection Fighting Alliance to create the new Legacy Fighting Alliance promotion. It’s a move Spann finds to be “really cool.” He almost saw it coming during a previous conversation with RFA President Ed Soares, who is now CEO of LFA.

“I talked to Ed Soares about joining RFA, and I wanted to hold belts for both Legacy and RFA,” Spann said. “I thought it might have been possible before the merger happened.”

Spann’s dreams of being a double champion may be gone now that the newly formed LFA is underway, but he’s still working his way back to another title shot. Spann has fought as both a middleweight and light heavyweight, and he will compete once again in the former division when he takes on 8-0 prospect Trevin Giles at LFA 3 on Friday, Feb. 10.

“I never make a strategy for my fights,” Spann said. “But I do like to beat people at their own game and just want to keep people from grabbing me. I think film lies; I like to watch myself instead and improve myself. I like facing undefeated guys, too. I like to say that I’m looking for O’s. I really just want to take care of my family and make sure my family and my kids have a better life than I have.”

Ryan would like to thank God and his teammates and training partners at Performance Evolution in Lake Charles, La., as well as his supporters, including Radiology Associates and World Gym. Follow Spann on Twitter: @Superman_Spann
Advertisement