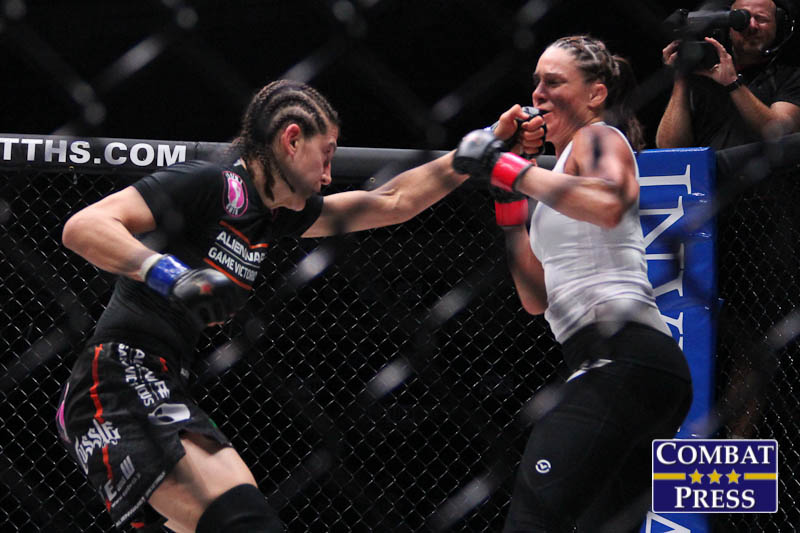 After a long hiatus from the fight scene, Invicta Fighting Championships returned to Kansas City, Mo., and the Municipal Auditorium for its eighth event. The show featured two title fights. The headliner saw Michelle “The Karate Hottie” Waterson defend her atomweight crown against a durable, yet outmatched, Yasuko Tamada. The co-main event was a battle for the vacant Invicta straweight title between Katja Kankaanpaa and Stephanie Eggink. Invicta FC 8 went down in the history books as the first Invicta event to air on UFC Fight Pass. The fight card was highly diverse in experience, weight classes and fight styles, which laid the groundwork for an amazing night of fights.

Watching the ladies compete and looking back on their performances, here’s what we learned:

Michelle “The Karate Hottie” Waterson is the real deal.

The dynamic atomweight striker defeated Japan’s Yasuko Tamada by what appeared to be assault and battery. Her combinations and power overwhelmed the challenger. Waterson set up powerful head kicks, had the endurance to keep her stand-up game crisp and used a very effective clinch game. Leading up to the fight, several questioned her endurance after a hiatus from competition. Waterson proved that ring rust was not a factor, and it will likely never be an issue for her.

Yasuko Tamada has an iron chin.

Until Saturday night, Tamada had never been finished in her fighting career. Standing opposite of Waterson, she proved to be durable and tenacious in to the closing seconds of round three. A kick to the face and a flurry of strikes delivered by Waterson convinced referee Greg Franklin to call the fight—a good call. A fourth round wasn’t a good idea, but it’s likely the Japanese fighter would not have backed down. Despite a loss, Tamada made a strong statement to her fellow atomweights.

Tonya Evinger over Ediane Gomes was the biggest upset of the night.

We know we cannot ever count Evinger out. Love her or hate her, she showed up in shape and ready to fight. Her efforts won her the biggest fight of her career against Ediane Gomes, who was making her bantamweight debut after previously competing in the 145-pound weight class. Being the underdog didn’t seem to faze the veteran. And while she gained some criticism for not making weight, she made some heads turn with her first-round submission of Gomes.

“The Happy Warrior” appeared comfortable in the striking exchanges against a hard-hitting Tara LaRosa. Modafferi’s head movement, footwork and timing was almost seamless. Winning the fight on the feet gave Modafferi the nod on the judges’ scorecards. Although she walked away with the win, she wasn’t the only person who won that night. The fans won, too. It was a great end to a highly anticipated trilogy.

Katja Kankaanpaa and Stephanie Eggink proved that they belong in the conversation as two of the best strawweights out there. Kankaanpaa eventually earned a submission win in the fifth round, but this back-and-fourth battle for the belt kept fans on the edge of their seats in suspense. It would be safe to assume both have a long career in the strawweight division and could likely see the UFC before too long.

Ashley Cummins is a warrior, through and through.

Employed as an officer with the St. Louis Police Department through the violent protests in Ferguson, Mo., and in the middle of her fight camp, Cummins made no excuses. She fell short to Alexa Grasso, but she never backed down and left it all in the cage. Likewise, Grasso showed impressive striking skills en route to a decision victory. We can expect Grasso to be a threat in the division.

What we will remember about Invicta FC 8:

The most memorable part of this rubber match was the love and respect shown between the two fighters, an atypical interaction between most opponents. Modafferi brought smiles to faces of many—including LaRosa—when she sported a Star Wars-esque cloak, complete with a light saber.

On fight night, “The Happy Warrior” sported a grin on her way to the cage, but it was LaRosa who appeared overwhelmingly happy while walking out to the cage, singing and dancing along to “American Pie.” The fight itself showed a clear demonstration of respect between fighters as well. Simply said, LaRosa and Modafferi deserve to be on a monument, and not just for their veteran statuses in the sport of MMA, but for their ability to represent the sport in a way that is inspiring, compassionate and respectful. Very seldom is that seen among mixed martial artists.

Thanks to Charmaine Tweet and Veronica Rothenhausler, the 155-pound division is now a real thing.

This lightweight bout was the first of its kind for Invicta FC, but recent signings of additional 155ers suggests the division will continue to develop.

And finally, there’s what we learned about Invicta Fighting Championships:

In the last two years, Shannon Knapp and her team have built the Invicta FC brand on integrity, passion and hard work. In those years, Invicta has evolved tremendously and, despite setbacks and hurdles, has become one of the most reputable promotions in an otherwise male-dominated sport.