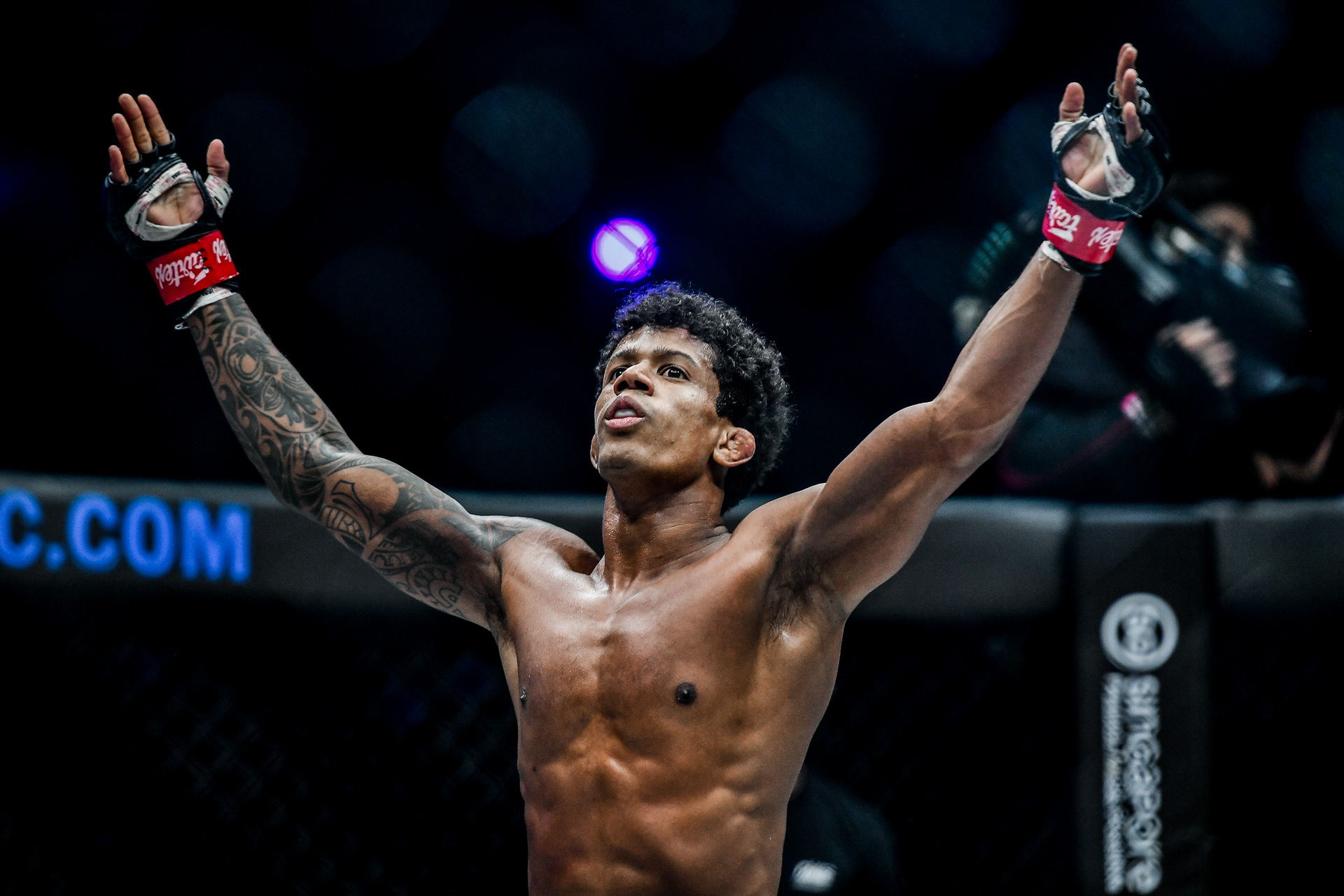 ONE Fight Night 10’s Adriano Moraes: ‘Want to Finish This Story With a Big Win’

Florida is home to a rather large contingent of combat sports athletes who have immigrated from Brazil. Two of the largest camps in the state, Kill Cliff FC in Deerfield Beach and American Top Team in Coconut Creek, are only seven miles apart on the northern end of Broward County. Between the two of them, these camps alone house dozens of Brazilian athletes who have made Florida their new home. One of them is ATT’s Adriano “Mikinho” Moraes.

While Moraes may have relocated to Florida several years ago, his native roots are in still in his hometown of Brasilia. This is where he began training martial arts, and also where he eventually landed at the Constrictor Team, training under Ataide Junior. He made his professional mixed martial arts debut in Sep. 2011. Today, he is now 20-4 as a pro, and is the former Shooto Brazil and three-time ONE Championship flyweight champion.

“I feel blessed to have my career and be at the high level I am today. Life is good. When your work is what you love, I think a lot of opportunities show up. I try to take it with both hands and create my own life. I like to fight. I like to compete. I like to play jiu-jitsu. And, being a successful fighter has helped me a lot to help my people, help my family, and achieve dreams.”

Now 34 years old, Moraes made his ONE debut back in Mar. 2014. After winning his first two fights in the promotion, he challenged Geje Eustaquio for the inaugural flyweight title in September of the same year. He won the title, defended it once in Mar. 2015, and subsequently lost it eight months later. It was after that first ONE title win that he first visited Florida.

Seven years ago, Moraes made the move from Brasilia to South Florida to permanently join the team at the ATT headquarters. It was in the Fall of 2015 that he also received his black belt in BJJ from Junior. After losing his title later that year, Moraes got back in the win column, earned the interim title in Aug, 2016, and, after a successful unification bout and one title defense, he lost it back to Eustaquio by split decision in Jun. 2018. However, the two met again for their rubber match seven months later, and Moraes became the undisputed champ for the third time.

In the five years that Moraes was sitting at, or near, the top of the ONE flyweight division, another famous fighter – possibly the greatest fighter of all time – was carrying on as the longtime ruler of the UFC flyweight division. Demetrious “Mighty Mouse” Johnson won the inaugural UFC flyweight title in Sep. 2012. After 11 title defenses over the following five years, Johnson lost his title to Henry Cejudo in Aug. 2018. In the months following, the UFC ended up trading Johnson to ONE, in exchange for former ONE and Bellator welterweight champion Ben Askren. This move completely changed the course of Moraes’ career.

Eventually, Moraes dream came true, and in more ways than one. In Apr. 2021, he finally got the chance to fight Johnson at ONE on TNT 1. It was Moraes’ second title defense on his third championship run. In the second round, after a lot of back-and-forth exchanges, Johnson went low, and Moraes caught him with a right uppercut, sending him to the mat. In the ensuing exchange, with Johnson on the ground, Moraes was able to score a knockout with a knee to the head, which is legal under ONE’s ruleset. This was only Johnson’s second loss in nearly 10 years.

Last March, Moraes defended his belt once again, setting up a rematch with Mighty Mouse in August. In another back-and-forth war, that one made it all the way into the fourth round, before the former UFC champ landed a huge flying knee to knock out the champ, earning his second flyweight title in a major promotion. While Moraes fully accepts his loss, he did have some extenuating circumstances that he felt affected his performance.

“The first fight was perfect,” said the Brazilian. “For the second fight, I had a little bit of problem with my hydration test. So, I got my body really exhausted one day before to make weight and make the hydration test. So, I think I had some mistakes in the fight week about my diet. And, then, one day before, I got my body really exhausted to make the weight, but I made it. And, I was proud of it, because, if the champion doesn’t make the weight, we just lost the belt. I didn’t want that to happen with me, so I gave it at all to make the weight. So, I made it, but, unfortunately, my body felt it a lot. I knew that, but I needed to go to fight. I needed to make that night happen, and I’m proud for it, because we made the fight happen. Unfortunately, I lost, but we did it.”

Moraes has had a wild career thus far, but there is still a long road ahead. 11 of his 15 ONE Championship fights have been title fights, he has already had a trilogy with Eustaquio, and now he is positioned for a second trilogy – only this time against one of the greatest fighters in history. On Friday, May 5, ONE Championship will be making their debut on U.S. soil as ONE Fight Night 10 lands in Broomfield, Colo. The headliner will be the third bout between Moraes and Jonhson, and it’s hard for him to pick which multiple-time opponent has been the toughest thus far.

“Both guys are true fighters, you know?” said Moraes. “I think if you put it on a scale, both men are really tough. The only difference was the timing. Geje Eustaquio was in the past, and Demetrious Johnson is right now. Both guys were hard. Man, to fight a Filipino guy in the Philippines is crazy, bro. And, right now, I’m going to fight an American in America. I love this kind of challenge.”

While Eustaquio and Moraes had a history together that spanned almost five years, the history Moraes has been building with Johnson is surreal. Mighty Mouse was a guy he looked up to as the greatest flyweight ever, before joining ONE. Now, the two are 1-1, and in a position to see who the best really is, when they meet on ONE’s first card outside of the Asian continent.

“It’s funny, because I never imagined I would be fighting against him,” Moraes elaborated. “And, today, I have like a relationship with him. You know wIhat ‘m saying? Like, it’s an honor to be a part of a legendary history like Demetrious Johnson [has]. He was nominated the greatest of all time, and I beat him once, and, then, I got my ass kicked. So, we’re writing a beautiful story together about, like, fighting, losing, winning. I think, for me, I’m someone whose been inside of his story. I’ve learned a lot with him. I think, to have Demetrious Johnson as an opponent, is a dream come true. For me, he’s one of the best business partners anyone in this division can have. So, I feel blessed to share the ONE Circle with him again, and I can’t wait for our third dance.”

One thing is for sure, both men will be looking forward to less travel leading up to this fight. ONE Championship has primarily hosted events in a relatively small geographic area, literally on the other side of the world. Singapore is about a 14-hour difference from the Denver Metro area, where their fight will take place. Johnson will be coming from Washington state, and Moraes will be coming from Florida. Both men will enjoy the much shorter flights.

“It’s been almost 10 years fighting in Asia,” said Moraes. “Always, when I go to fight, I do like crazy travel – a crazy trip – to go to Asia. This is one opportunity for the company to grow. We always hoped and prayed that the company keeps getting bigger and bigger, and the company blessed us too. I think this is one of the dreams of the company that is coming true. I’m proud for ONE Championship to realize this, because they work so hard. To have ONE Championship outside Asia for the first time ever – bro, it’s mind-blowing.”

Moraes moved to Florida seven years ago, and he connected with his wife Larissa after that. The two have built a life there, where he likes to skateboard, surf, play video games and study the universe. They also help others trying to immigrate by writing recommendation letters, along with a professional writer. He has friends and training partners who have fought in Colorado before, so he plans on coming out early to prepare for the altitude change, as the 1stBank Center, where the event will be held, sits about 5,600 feet above sea level. It is there that he plans to begin his historic fourth run as the ONE flyweight champion.

“I want to finish this story with a big win,” Moraes said. “Me and my team deserve that. I came back to the gym and took care of my mistakes. I learned a lot from my last fight, and, May 5, I’m going to win. I’m going to take my belt back.”

ONE Fight Night 10: Moraes vs. Johnson III takes place Friday, May 5, and will air live and free to subscribers on Amazon Prime Video.