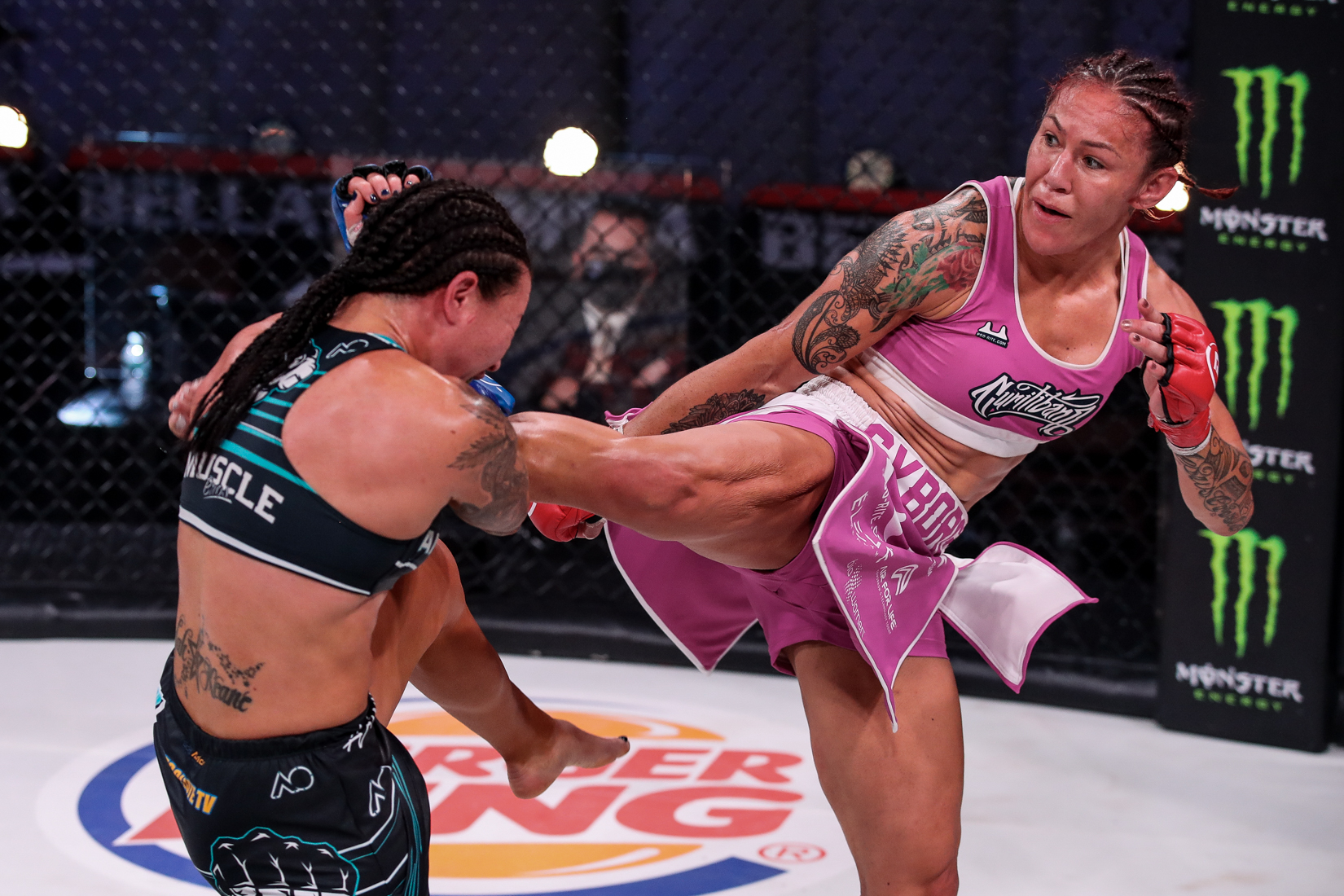 After starting with a bang on Friday, Bellator 279 looks to ride the momentum on Saturday, Apr. 23, 2022. The fight card currently contains 13 matchups, including two championship fights and the start of the Bellator bantamweight grand prix.

The main event features a rematch between Cris Cyborg and Arlene Blencowe for the women’s featherweight title. Last time out, Cyborg finished Blencowe in the second round by rear-naked choke. Since then, the Australian has won two fights to earn a second shot at the champion. Only time will tell if Blencowe can pull off the upset.

In the co-main event, the interim bantamweight championship is on the line after Sergio Pettis had to withdraw from the grand prix with a torn ACL. The interim championship will end up in the hands of Juan Archuleta or Raufeon Stots. Despite the disappointment of Pettis being injured, both Archuleta and Stots are solid replacements until the champion returns.

The Bellator 279 preliminary card airs live on YouTube starting at 9 p.m. ET, with the main card following at 10:30 p.m. ET on Showtime. Check out the full Bellator 279 preview and predictions below.

Arlene Blencowe has challenged for the Bellator women’s featherweight title twice before; is the third time the charm?

Blencowe deserves the title shot, but only because the division lacks contenders. Her two straight wins leave her in a position for a title shot, yet the lack of improvements is concerning. If Blencowe wants to upset Cyborg, she needs to keep the fight standing and make it ugly with dirty boxing. Striking from a distance will play in favor of Cyborg, and going to the ground is a death sentence for Blencowe.

Cyborg won convincingly last time, and it’s hard to expect anything else this time around. Outside of a potential knockout, Blencowe does not have many paths to victory. Cyborg will most likely finish the fight inside the distance and continue her reign as the best fighter in Bellator.

The first round of the Bellator bantamweight grand prix officially kicks off with two first-round fights; which two fighters punch their tickets to the semi-finals?

With the Bellator bantamweight grand prix underway, two fighters will punch their ticket to the semi-finals at Bellator 279. The first matchup includes the interim title on the line between Stots and Archuleta.

Stots has recently emerged as one of the best bantamweights in the world. His combination of volume and speed has made him a nightmare opponent for others. Holding a pro record of 17-1, Stots’s only loss came from ranked UFC fighter Merab Dvalishvili. Other than Dvalishvili, nobody has figured out the puzzle to beating Stots.

Archuleta has a patient approach that carefully picks his calculated strikes to stay out of trouble. ‘Spaniard’ is well-rounded and knows how to stay calm in brutal fights. The only way to beat Archuleta is to copy his style and outstrike him with volume. Unfortunately, Stots has the perfect style to beat him.
Stots should be able to pressure Archuleta and outstrike him on the scorecards. Even if the fight goes to the ground, Stots has reliable sweeps and should be able to get back up. They should end up going the distance, with Stots becoming the interim champion.

In the second grand prix matchup, Kyoji Horiguchi takes on Patchy Mix. Last time out, Horiguchi lost the title fight against Pettis in a devastating fashion. After dominating on the scorecards, Pettis landed an insane fourth-round spinning back fist to win. Horiguchi looks to avenge the loss by dominating the grand prix to earn a rematch against Pettis.

On the contrary, Mix has looked phenomenal in his last two fights. After beating James Gallagher and Albert Morales, Mix showed the evolution of his skills since losing to Archuleta. With everything going right for Mix at the moment, he looks to ride the momentum into the biggest win of his career.

Horiguchi vs. Mix is an intriguing fight that should not be missed. After his rivalry with Kai Asakura and the loss to Pettis, Horiguchi has the experience and motivation to win the entire grand prix. Mix is a dangerous fighter, but he may still have more to learn before his time comes to be the champion. Horiguchi wins by unanimous decision.

Ilima-Lei Macfarlane fights for the first time since losing her title; does she defeat UFC veteran Justine Kish in front of a hometown crowd?

At first glance, most people would probably pick Ilima-Lei Macfarlane. She just lost the title, fighting in her hometown, and has an opponent with a salty record. The problem is that Justine Kish is better than her record. Although she lost five out of her last six fights, Kish has a solid chance of pulling off the upset.

Kish has reliable jiu-jitsu off her back and should be able to prevent Macfarlane from submitting her. If the fight stays standing, Kish has the better striking with her Muay Thai. Macfarlane will be riding high on the crowd’s energy, but Kish should be able to pull out a split-decision win based on significant strikes and submission attempts.

The sleeper match-up to watch is Yancy Medeiros vs. Emmanuel Sanchez. Putting this fight on the prelims is a disgrace. Anyone that has seen Medeiros vs. Oliveira knows what he is capable of. After losing his last four UFC fights, Medeiros found a new home with Bellator. Luckily for Medeiros, his debut will take place in his hometown.

Bellator did not give Medeiros an easy matchup for his big moment. Sanchez is an absolute killer who has fought against the best fighters that Bellator has to offer. After losing his last three fights, ‘El Matador’ will come out ready to do whatever it takes to win.

Both fighters are talented and tend to get into slugfests. With Mediros trying to impress his home crowd, and Sanchez looking to get his career back on track, this prelim matchup has everything needed to be the fight of the night.