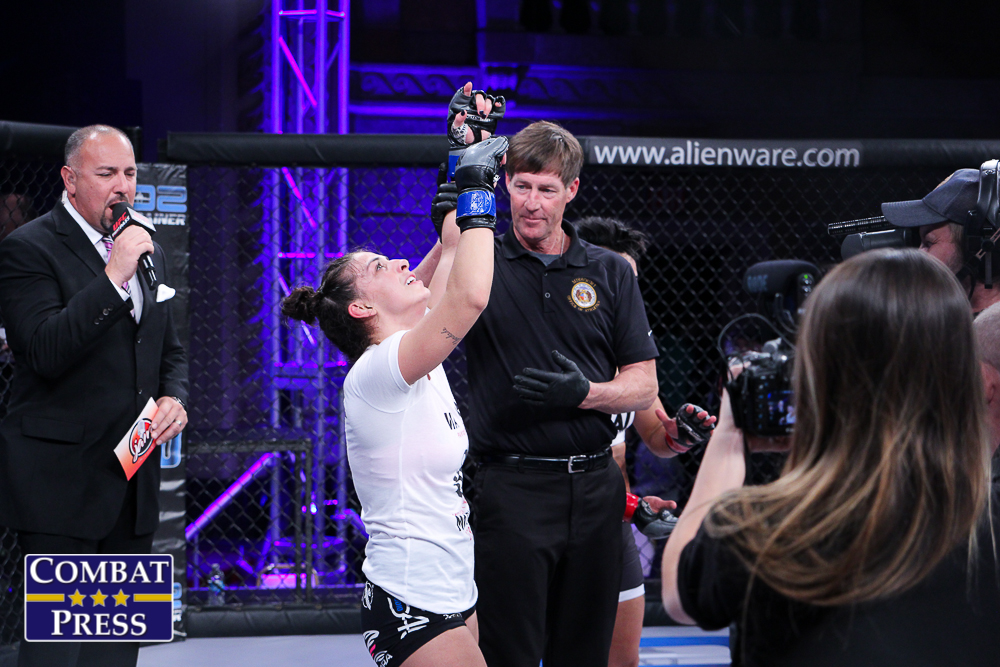 Will Mackenzie Dern Join the Strawweight Elite at UFC Vegas 39?

Mackenzie Dern faces Marina Rodriguez in the main event of this Saturday’s UFC Vegas 39 card. The winner of this bout is likely to be well placed to earn a title opportunity.

Between UFC strawweight champion Rose Namajunas and the two top contenders, Weili Zhang and Joanna Jędrzejczyk, they only combine for 10 losses in 57 fights. Zhang and Jędrzejczyk are also both former champions. The dominance of these three fighters has led many fans to believe that they are on a level of their own in the strawweight division.

Dern, the daughter of Brazilian jiu-jitsu legend Wellington “Megaton” Dias, came into MMA as a decorated BJJ legend in her own right. She was an ADCC and IBJJF world champion, in addition to winning dozens of gold medals in high-level championships. Her BJJ credentials are unparalleled amongst female fighters, and there were high expectations when she made her MMA debut. She won her first five pro fights, but clearly had issues cutting weight. The 28-year-old missed the mark twice in her first three fights, and again in her second UFC bout. This looked like it could plague Dern’s career and prevent her from fulfilling her potential.

Dern stepped away from action after she became pregnant with her first child in late 2018. She returned to the Octagon in Oct. 2019, just four months after giving birth. She ended up losing that fight against Amanda Ribas, but was praised for making her comeback much quicker than anticipated.

The Arizona native has since embarked on a four-fight winning streak, securing three submission wins in the first round. She has appeared to resolve her weight-cutting issues, and noticeably appears to be in better physical shape. The MMA world already knew how potent her BJJ game was, so it did not come as surprise when she pulled off those submission victories. The fight that revealed the most about her ongoing development came against Virna Jandiroba. Jandiroba is also a black belt in BJJ, and some had questions regarding how Dern would fare against someone who could neutralize her biggest weapon.

The fight between Dern and Jandiroba ended up mostly playing out on the feet, which is what often occurs when two elite grapplers are pitted against each other. The fight was action-packed, with both athletes throwing a high number of strikes. Dern showcased her stand-up improvements in the fight and demonstrated an ability to sustain a high volume of strikes, which is something she had not shown before. She also had to overcome adversity, as she suffered a broken nose during the bout. The fact that she continued to march forward is a testament to her toughness. Dern persevered with a unanimous decision victory on the judges’ scorecards. This performance showed that she had the ability to win a fight when she was taken out of her element.

Dern’s jiu-jitsu prowess makes her a threat to anyone she faces, but there are other parts of her game that will need to be refined for her to be able to compete with the strawweight elite. Under the tutelage of Jason Parillo at the RVCA gym in Costa Mesa, California, Dern has made vast improvements in her striking. However, she can still look sloppy at times and appear to lack finesse. Jandiroba is not known for her stand-up, yet she was able to land a significant amount of strikes on Dern. Dern will need to become a less stationary target if she is going to have a chance of beating the best in the weight class.

The 28-year-old will also need to improve her wrestling in order to make the most out of her grappling skills. Her inability to take Amanda Ribas down meant that the fight played out on the feet, and she was easily second best in this department. The aforementioned Namajunas, Zhang and Jędrzejczyk all have the skills to negate Dern’s jiu-jitsu. Namajunas and Zhang are solid grapplers themselves, while Jędrzejczyk is renowned for her excellent takedown defense.

On average, Dern has attempted less than one takedown per fight in her UFC career. Most of her submission victories have come after her opponents have been the ones to engage in the grappling. This highlights how dangerous Dern is off her back and how she can pull off submissions from unorthodox positions. However, higher caliber fighters are unlikely to make the same mistakes as her previous opponents. Therefore, it is imperative that Dern finds ways to initiate successful grappling sequences. Having a better takedown game will enable her to impose her strongest weapons on these opponents and give her an easier path to victory.

Dern will have to get past Rodriguez this weekend to get into title contention. Rodriguez is a technically proficient striker and possesses knockout power that not many fighters have at strawweight. She has delivered strong performances in her last two outings in the Octagon and will be high on confidence heading into this bout.

On paper, the fight is a classic grappler versus striker match-up. Rodriguez has shown a weakness on the ground in the UFC. This proved to be her downfall in a close fight against Carla Esparza, and she was also given some problems on the ground by Michelle Waterson. However, if Dern is unable to take her down, she could be in for a difficult night. Rodriguez is the most accomplished opponent that Dern would have come across up to this point. Sern has shown her durability during her UFC tenure, but this will be tested by Rodriguez.

Dern already holds the record for most submission wins in UFC strawweight history and is tied for the most UFC submission victories amongst women. She will almost inevitably set records that stand for a very long time. However, the BJJ ace has championship aspirations that will not be fulfilled by just setting records. A dominant victory over Marina Rodriguez on Saturday will notify the MMA world of her ability to thrive among the world’s best. It will take her one step closer to competing for a UFC championship and, in the process, joining the strawweight elite.