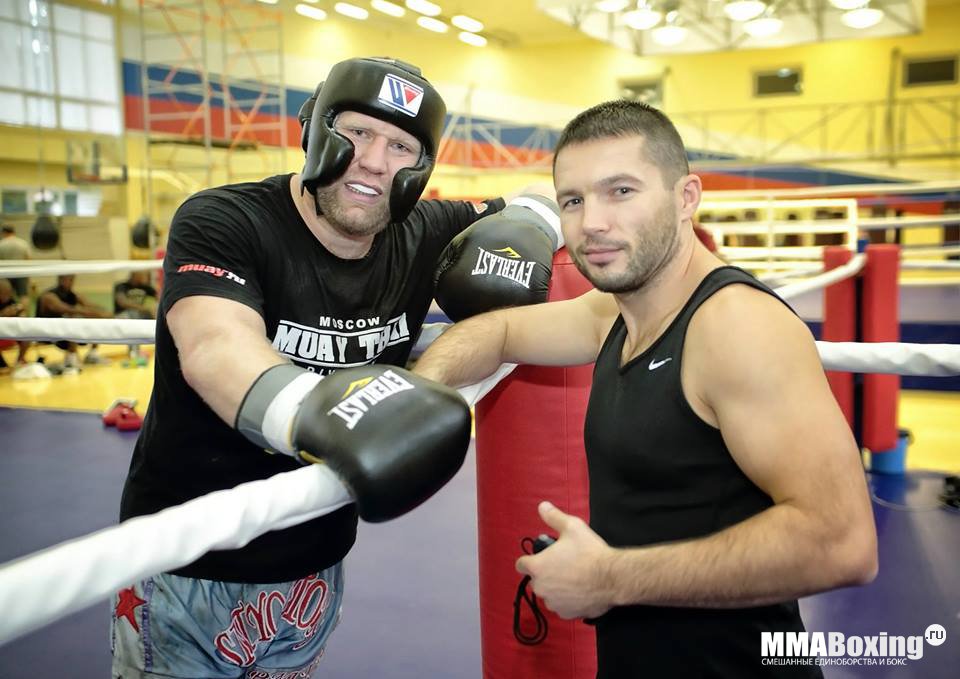 In June, Alim Nabiev declared that his wish was to fight Nieky Holzken. On Sept. 30, the fight will happen at GLORY 45. How did you contact the promotion and how did you manage to secure this fight with one of the biggest stars in kickboxing as Nabiev’s GLORY promotional debut?

Yes, Alim has a very serious fight. In my opinion, it is logical for him to fight specifically against Holzken.

The promotion contacted us themselves. We were talking about Alim’s participation in GLORY for a long time. We expected that our fighter would have his first fight in GLORY in Azerbaijan the previous year, but they did not organize the tournament there. Alim already has won against fighters of the best organization in the world — for example, Alka Matev, Jamie Bates, Chad Sugden and Yohan Lidon a year ago. Now, Alim is in optimal shape and ready to fight the best.

The organization probably noted his challenge and his present shape. Furthermore, [Yoann] Kongolo is out of the tournament. They need fresh blood for intrigue. Just a while ago, Alim predicted his fight with Nieky. In China, we joined Holzken for a photo and Alim said to him that he wants to fight him. Dreams come true!

Are you Nabiev’s manager and do you manage all negotiations by yourself?

Vityaz Fight club is the manager of Alim. Eduard Philberg, Sergei Kharitonov and me. I deal with all the current issues of my fighters.

What are the terms of Nabiev’s contract with GLORY?

We are not allowed to publicize contract terms, but it’s probably the same with other fighters’ contracts.

What is Holzken’s biggest weapon?

Nieky’s biggest weapon is his great experience, mostly experience in top-level fights. He is unpredictable. Today, he could have a great fight, and tomorrow he’ll have an average performance.

He has good technical base as well.

Did you watch Cédric Doumbé and Murthel Groenhart fight? Did you agree with the judges’ decision?

Of course, I watched it. In my opinion, the decision was correct. It was a very even fight, but Murthel wanted this win more. He was more aggressive and varied. Cedric was focused on one single shot and looked ineffective in the bout, which is not his style.

Generally, I didn’t enjoy the fight. It was boring. There were many faults, and both fighters were frustrated. It was not a champion-level bout — not spectacular. We could see it by the public’s reaction. I think Alim will bring more show and beauty in this weight class.

Your student Sergei Kharitonov is a big star and a much more experienced fighter. Tell us the story of how you started to work together.

Four years ago, I was asked to prepare Sergei for a GLORY tournament fight against Daniel Sam after one year without practice. We worked together and became friends. Sergei won that fight.

Kharitonov is a very talented fighter. Many people underestimate him. With our collaboration, he lost only to Anderson [“Braddock”] Silva, but then he got great revenge by knocking him out [in their rematch].

You are a striking-technique trainer, if I’m not mistaken. Who teaches wrestling in Vityaz Fight?

We don’t have a good wrestling and grappling trainer yet. Usually we cooperate with Strela or find suitable sparring partners for a training session.

After Kharitonov’s lost to Javy Ayala at Bellator 163, many people didn’t believe that Kharitonov would come back, but you said that he will return and prove to everyone that he is still one of the best fighters in MMA. You were right. In 2017, he finished three fights in the first round. Where and when will Kharitonov have his next fight?

He will probably fight in October. We are negotiating now.

You are the founder and former head coach of Poltava Regional Muay Thai Federation. Tell us how you decided to move to Russia.

Yes, I founded the regional federation from nothing, and it was quite competitive at Muay Thai and kickboxing in the Ukraine. We had many good fighters on the Ukrainian national team. Seventeen times, my guys took first place in world championships and cups, 12 titles in professional sport.

During the last eight years, I visited Moscow for tournaments almost every month. Trips take a lot of energy and I had many propositions for cooperation. Presently, I have one of the strongest team in all CIS. I know that soon many fighters will show themselves.

In one of your interviews, you said that you were first introduced to Muay Thai in 1993 at White Lotus gym. How much did you train there before you recognized that it was a sect?

I did not pay attention to whether it was a sect or not. I didn’t actually care. I attended it to learn how to fight. Many friends of mine trained there. Besides, since my youth, I have been difficult to influence. I always have my own opinion, and if I felt attempts [of influence], I just ended communication with those people. I left White Lotus to train at a boxing gym.

Should activity of such an organization be forbidden at a legal level?

It should if it harms the society.

Who is the best trainer in kickboxing history?

Cor Hemmers. His student, Ramon Dekkers, is my favorite fighter. I still enjoy watching his fights. He is an example for all. Actually, Cor prepared many well-known fighters. His Golden Glory was great in the old K-1 times.

What is your most anticipated fight in kickboxing?

Giorgio Petrosyan against Sitthichai. Time will tell if it is possible.