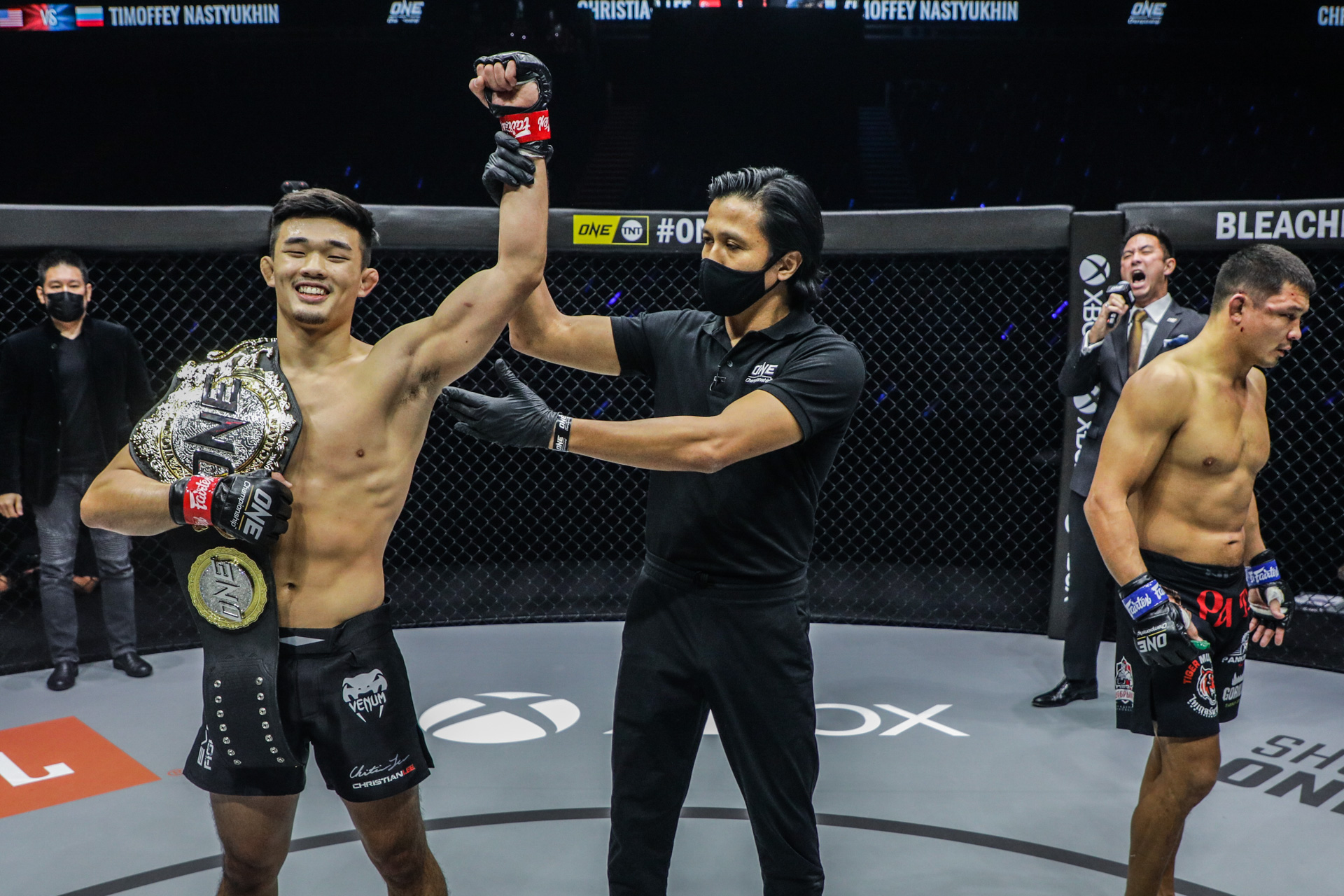 ONE Championship: Revolution Preview and Predictions

The latest edition of ONE Championship goes down this Friday, Sept. 24. ONE Championship: Revolution features eleven fights spreading out over MMA, Kickboxing, and Muay Thai. The event takes place at the Singapore Indoor Stadium in Singapore.

The main event will feature Christian Lee looking to defend his lightweight belt against Rae Yoon Ok. After successfully defending the belt three times, Lee is ready for a new challenge. Ok joined ONE Championship in April of this year and picked up two big wins in one week. Considering the second win was against Eddie Alvarez, Ok earned his title shot. Although Lee has been untouchable, Ok offers a style that can counter the king.

Also, two more title fights will go down at ONE Championship: Revolution. The co-main event will be a bantamweight kickboxing championship fight between Capitan Petchyindee and Mehdi Zatout. Capitan vs. Zatout will be the perfect addition to the ONE Super Series vault. Before the kickboxing bout goes down, the strawweight title will be on the line in the trilogy fight between Joshua Pacio and Yosuke Saruta. Both fighters will surely do whatever it takes to end the rivalry once and for all.

ONE Championship: Revolution also has eight other bouts on the fight card. From Marcus “Buchecha” Almeida to Martin Nguyen, this event features many talented fighters.

The event airs at 6:30 a.m. ET on on YouTube in the U.S. Let’s take a look at the preview and predictions.

The ONE lightweight MMA title is on the line in the main event. Will Christian Lee successfully defend his belt against Rae Yoon Ok?

At 23 years old, Lee has continued to improve while dominating the opponents in front of him. After winning the title, Lee finished two of his three title defenses by first-round knockout. It became clear that the division was lacking contenders to dethrone the champ. Everything changed when Ok emerged five months ago.

After signing with ONE Championship, Ok beat top contenders Marat Gafurov and Eddie Alvarez in one week. The dominant win against Alvarez was enough to earn the respect Lee and set up this title fight. Ok is a tough matchup for Lee because of his speed and striking. Although Lee is well-rounded, he mainly relies on his striking to win. If Ok can control the pace, Lee may find himself with one of his most challenging fights yet.

The issue for Ok is that he’s playing into Lee’s skillset. Although Ok is talented, Lee has dismantled anyone willing to strike with him. Lee should be able to control the pace and throw Ok’s rhythm off early. A finish will be tough to get, but Lee has the tools needed to beat Ok and leave the cage as the champion.

Capitan Petchyindee squares off against Medhi Zatout with his bantamweight kickboxing world title at stake. Who wins this showdown?

In the co-main event, Capitan will defend his bantamweight world title against Zatout. After a successful Muay Thai career, Capitan looked to make an impact on the ONE Super Series. Capitan’s aggression and heavy strikes have made him nearly unbeatable recently. Holding a ONE kickboxing record of 2-0, Capitan is ready for his next challenge.

At 37 years old, Zatout believes it’s his time to become the champion. After going 1-1 in ONE kickboxing, Zatout finds himself against the king of the division. Luckily, Zatout has a style that could counter Capitan nicely. Zatout tends to fight off the counter and get creative off his back foot. Meanwhile, Capitan applies heavy pressure and mostly strikes first. The question is, who will effectively use their fighting style the best?

Although Zatout has a lot of great highlights, allowing Capitan to apply pressure worries me. He could catch Capitan on the counter, but Capitan is a master at not over-extending and staying composed. Capitan should be able to overwhelm Zatout with volume and retain the bantamweight kickboxing title.

The strawweight MMA championship will also be decided with a fight between champion Joshua Pacio and Yosuke Saruta. How does this fight play out?

ONE Championship: Revolution will also feature a trilogy fight between Pacio and Saruta. Since joining the strawweight division, Pacio has been phenomenal in every appearance. After winning the title, Pacio thought it was his time to clear out the division. Unfortunately, his reign of terror ended quickly with a split decision loss to Saruta. Pacio got an immediate rematch and beat Saruta convincingly to earn back his title. Now, after two successful title defenses, Saruta has returned to end the trilogy.

At 34 years old, Saruta has the opportunity to prove to ONE Championship fans that Pacio’s win was a fluke, unlike his win in their first battle. After losing their second fight, Saruta beat two other top contenders to get back Pacio. It’s safe to say, he will do whatever it takes to win this fight. Both fighters are well-rounded and seem to be equally skilled. The first two fights were back-and-forth, with plenty of damage coming from both sides. Surely both will make adjustments and look to expose the other.
The difference in the first two fights was volume and aggression. Saruta pressured Pacio in the first bout and outworked him to win by split decision. In the second fight, Pacio adjusted to the pressure and started to expose Saruta’s weaknesses. If Pacio can keep Saruta on his back foot, he should end the trilogy with a finish to retain his title.

The sleeper fight of the card is the main card opener between Victoria Lee and Victoria Souza. At 17 years old, Lee is the youngest fighter of her family. Her brother is the aforementioned Christian Lee, and her sister Angela is the ONE atomweight champ. While both siblings have done incredible things at a young age, Victoria looks to further the family legacy. Holding a pro record of 2-0, Lee has dominated her first two opponents with unbelievable grappling skills. She is now set for her most challenging fight yet against Souza.

At 24 years old, Souza holds a pro record of 5-0, with two wins by submission and two by knockout. All four of her finishes were in the first round due to her aggression at the start of every fight. The one issue is that all five of her opponents were making their pro debut. Although Lee is younger, she has more experience than anyone Souza has fought. This fight will most likely end up on the ground at some point, creating an intriguing matchup.

Both fighters have continued to improve on their striking, but tend to rely on their grappling. If the bout stays standing, we could see their striking truly tested for the first time. Meanwhile, if the fight goes to the ground, we get to see two prospects show off their impressive grappling skills. The winner will emerge as a top prospect with a solid win on their resume.