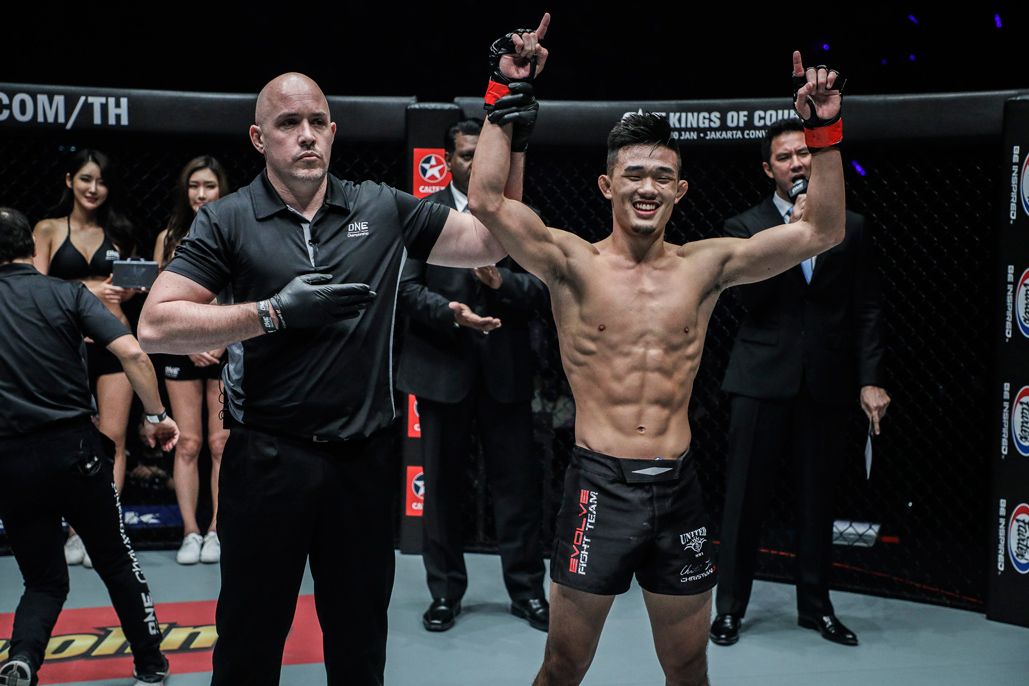 ONE on TNT II: Lee vs. Nastyukhin Preview and Predictions

Last Wednesday’s TNT debut for ONE did not go well for American stars Eddie Alvarez and Demetrious “Mighty Mouse” Johnson. Alvarez suffered a disqualification loss and Mighty Mouse was blasted by a knee courtesy of Adriano Moraes for a knockout loss. Perhaps the United States will fare better this week at ONE on TNT II.

In the MMA realm, America’s Christian Lee attempts to defend his lightweight crown for the second time. His challenger, Timofey Nastyukhin, made a name for himself when he ruined the aforementioned Alvarez’s promotional debut, but he’s had an up-and-down ride in ONE. The Russian has been with the company since 2014, but he’s never won more than two contests in a row. If he beats Lee, Nastyukhin will finally break this trend. That’s easier said than done against a champ who is rolling with five straight wins, including four stoppages.

Meanwhile, Muay Thai gets another featured spot when Janet Todd battles Anne Line Hogstad. The American, who currently holds ONE’s women’s atomweight kickboxing crown, has put together a strong case for a shot at the atomweight Muay Thai crown. With a win here, Todd could be poised to either rematch former champ and rival Stamp Fairtex or challenge current queen Allycia Hellen Rodrigues.

For the second week in a row, ONE is combining MMA and Muay Thai for its American show. Is this a good idea?

Theoretically, yes. However, ONE’s strategy is quite puzzling, actually. American fans are very familiar with MMA, but they need to be sold more on ONE’s kickboxing and Muay Thai offerings. ONE has a solid roster in both striking arts, too, so it wouldn’t be difficult. The key is to make sure there are eyes on the product.

Last week’s TNT debut put Eddie Alvarez and Demetrious “Mighty Mouse” Johnson first, even calling Johnson’s fight the “main event” when it was actually the penultimate bout in the lineup. After a lengthy pause to analyze the MMA fights, Rodtang Jitmuangnon finally made his way to the cage to fight Danial Williams in Muay Thai action. Rodtang put on a great showing, too, but how many fans had tuned out by then under the impression that the fights were over? More than a few, probably.

This week, Christian Lee’s title bout will headline the TNT broadcast, but that doesn’t necessarily mean Janet Todd will kick off the evening. ONE showed last week that its bout order doesn’t actually end with the headliner. Lee isn’t quite as big of a name stateside as Alvarez and Johnson, so it really depends on how ONE markets this card. If the company can avoid saving its Muay Thai action for after the “main event,” then perhaps it can start initiating fans on the joys of watching the likes of Rodtang, Todd, Regian Eersel and more. However, if ONE keeps essentially burying these contests, then the promotion is making a major misstep.

Janet Todd has been excelling in both kickboxing and Muay Thai under the ONE banner. Will her run continue on Wednesday against Anne Line Hogstad?

Todd fought for the ONE Muay Thai belt in 2019 against Stamp Fairtex, and now she’s working her way back up the ladder. She’s won three kickboxing contests, including a title affair against Stamp, and two Muay Thai outings since then. She looked strong in her March appearance against Alma Juniku. Todd started slow, but steadily built toward an eventual unanimous nod over the Australian.

Norway’s Hogstad is also fresh off a victory over Juniku, but it was only a majority decision. Overall, though, she is a modest 32-18 in her career and has had a rocky road since 2018. Hogstad, much like Danial Williams was for Rodtang Jitmuangnon, appears to be a sacrificial lamb to give Todd a big win on U.S. television.

Todd should be able to easily outwork Hogstad en route to a unanimous-decision victory.

Christian Lee is set to defend his lightweight crown against Timofey Nastyukhin, the man who spoiled Eddie Alvarez’s ONE debut. Will Lee emerge with the belt?

Unless his opponent is Martin Nguyen, Lee seems to have an answer for anyone thrown at him. Outside of two setbacks courtesy of Nguyen, Lee’s only other loss came as the result of a disqualification for an illegal suplex against Edward Kelly. Lee redeemed himself with a TKO win over Kelly, claimed the belt from Shinya Aoki, and turned back the challenge of Iuri Lapicus. He’s recorded eight wins by some form of knockout, but he also has the grappling to get the job done on the mat, where he’s tapped five foes.

Nastyukhin really put his name on the map with his spoiler performance against Alvarez, a former UFC and Bellator champion. The 31-year-old Russian clearly has power — he stopped Alvarez with strikes in the first-round for his seventh career knockout — but he’s also shown a questionable chin that has led to disaster against Kotetsu Boku and Saygid Guseyn Arslanaliev. Neither Boku nor Arslanaliev are at the same level as Lee, who has torched his recent foes. Nastyukhin can also be exposed on the mat, where he has been submitted on two occasions.

Nastyukhin’s win over Alvarez is proof enough that the Russian cannot be taken lightly. However, Lee has been seemingly unstoppable since late 2018. His striking arsenal will carry him to another big finish when he tangles with Nastyukhin.

Are there any match-ups on the lead card that especially demand attention from the fans?

This card has taken an incredible number of blows, including the loss of an intriguing strawweight affair featuring Jarred Brooks and Lito Adiwang and the removal of co-headliner Martin Nguyen. This has left the lineup at a current tally of five bouts, including three prelims. None of the fighters on the lead card are big ones, even within the ONE landscape. However, there are two Japanese fighters who have solid records and could make a strong impression on Wednesday night.

First, there’s Shuya Kamikubo. The 25-year-old is 11-1-1 through 13 pro appearances. He already has victories in his first four ONE outings, and he’s riding a seven-fight winning streak overall. He was initially slated to fight Troy Worthen at ONE on TNT 3, but he was shuffled forward a week to meet Mitchell Chamale. Chamale has not fought in MMA since 2015, so this should be a very winnable fight for “Stealth.”

The second Japanese upstart on the lead card is Yoshiki Nakahara. The 28-year-old is only one fight removed from a 55-second submission loss to Garry Tonon, but that marked his first setback since 2015. The 19-fight veteran was on a eight-fight winning streak going into the Tonon bout, and he has since rebounded with a stoppage victory over Ruslan Emilbek. Nakahara has a tougher opponent than Kamikubo, but Mongolia’s Shinechagtga Zoltsetseg has mostly seen low-level competition and still should provide Nakahara with a chance to build a new winning streak.