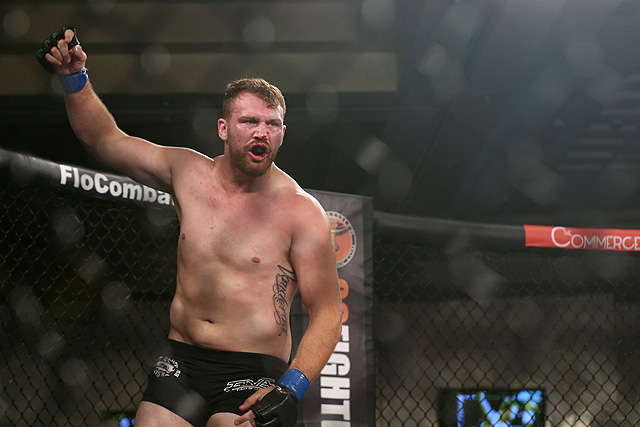 With four heavyweight match-ups on the docket, this weekend’s UFC Fight Night: Blaydes vs. Lewis card is loaded with the big boys. One affair that shouldn’t disappoint is the preliminary bout between Jared Vanderaa and Serghei Spivac.

After amassing a 10-4 record, Vanderaa was scheduled to fight Oscar Cota on Dana White’s Contender Series. However, Cota pulled out four days before the contest and was replaced by Harry Hornsucker. After the first three minutes played out evenly on the feet, Vanderaa clinched with Hornsucker and secured a high-amplitude takedown. He then rained down vicious ground-and-pound strikes and forced the referee to intervene. Vanderaa was subsequently awarded a UFC contract.

Spivac joined the UFC in 2019 with a 9-0 professional and a World Warriors Fighting Championships title reign under his belt. Despite suffering a loss in his Octagon debut to Walt Harris, Spivac bounced back to find some success with the promotion. He rallied to submit Tai Tuivasa at UFC 243. Spivac utilized his superior grappling skills to dominate the rising contender on the ground. He stumbled again when he met Marcin Tybura. In his latest contest, though, Spivac added a win over Carlos Felipe by majority decision. The Ukrainian-born fighter used his jab and long boxing in the first two rounds, but he sealed the fight with his wrestling in the third frame by scoring multiple takedowns against the game Felipe.

The intrigue with this match-up lies in what we do not know. The jury is still out on Spivac, who is just 2-2 inside the Octagon. However, his only UFC losses came to top fighters Harris and Tybura. Conversely, Vanderaa will be making his official UFC debut on Saturday, and it will be of interest to watch how he handles the occasion. Spivac’s experience in MMA’s premier organization could serve him well against the upstart.

Vanderaa and Spivac do also have history between them. In his post-fight press conference after his Contender Series win, Vanderaa called out Spivac, stating that the Moldovan-based competitor had ducked him on the regional scene. While the callout was meant in good nature, it is interesting that Vanderaa has been given the exact opponent he jovially requested.

When heavyweights collide, fans should always pay attention. However, with the unknowns in this match-up, it should not be missed. Whilst the division has new rising talent, the trip up the heavyweight ladder can often be quick. With an impressive performance, either of these men could slide into a big fight soon. These factors make it one to watch.