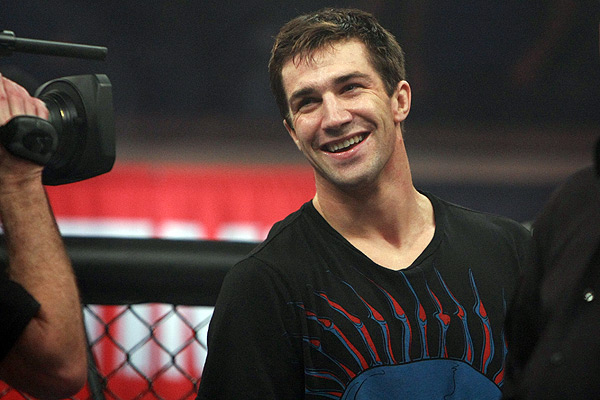 On Friday, Nov. 7, the UFC will host UFC Fight Night 55: Rockhold vs. Bisping from the Allphones Arena in Sydney, New South Wales, Australia.

Luke Rockhold posted an impressive win and became the first fighter to submit Michael Bisping. The first round was fairly uneventful, with Bisping getting the better of the early exchanges before complaining to the referee about an accidental headbutt. Rockhold turned the tide in the second half of the round. In the second stanza, Rockhold turned things up. He landed a straight left, then a head kick. The kick dropped Bisping. Rockhold pounced on Bisping and rained down a series of strikes but couldn’t finish. He caught Bisping in a guillotine choke and rolled to mount, where he finished the submission.

The streak of finishes continued in the evening’s co-headliner, where Al Iaquinta scored a TKO finish of Ross Pearson. In the opening round, Pearson arguably landed the better strikes to edge Iaquinta. The second stanza was just as close until Iaquinta scored a flash knockdown of Pearson. Pearson scrambled back to his feet, but he was still on wobbly legs. Iaquinta turned up the pressure, not allowing Pearson time to recover. He backed Pearson to the cage and dropped him with strikes for the TKO finish.

Robert Whittaker’s move up to the middleweight division produced impressive results. Whittaker engaged in a stand-up war with opponent Clint Hester for the better part of the duration of their fight. Each man landed big strikes early in their fight, but Whittaker was more effective. Whittaker took the fight to the ground late in the round and briefly obtained mount, but Hester was able to reverse and spend some time on top before the bell sounded. Whittaker flashed speed and power early in round two, but Hester answered back. After a brief clinch, the pair separated and in the subsequent exchange, Whittaker backed Hester up against the cage, landed a knee that staggered his opponent and then swarmed with punches as Hester went down to the mat. The referee stepped in to bring an end to the fight, awarding Whittaker with a TKO victory.

If your nickname is “The Hulk,” then smashing opponents should be part of your repertoire. Soa “The Hulk” Palelei proved that he can smash foes, delivering a second-round TKO finish of opponent Walt Harris. Palelei was stuffed on his takedown attempts in the first frame, but he had more success in the second round. After getting the edge in the stand-up for nearly four minutes, Palelei scored a takedown and transitioned to mount. He started pounding on Harris, eventually resorting to a series of thudding hammer fists that prompted the referee to intervene and award Palelei with the win.

In a night of thrilling finishes on the preliminary card, Jake Matthews put up one of the most memorable stoppages of the bunch. The young, undefeated fighter landed a superman punch in the second stanza that rocked his opponent, Vagner Rocha. Matthews chased Rocha with more punches and followed him to the ground. The young prospect caught Rocha in a choke and tightened his grip without sinking in his hooks. The referee checked Rocha and determined that the grappler was unconscious. Matthews walked away with the technical submission win.

Anthony Perosh’s ground game proved to be too much for Guto Inocente. The 42-year-old Australian gained top position on the mat early in the contest. Perosh eventually took Inocente’s back, flattened him out and sunk in the rear-naked choke for the submission finish. Perosh now has five wins inside the Octagon.

Dylan Andrews took control early in his fight with Sam Alvey, but his aggressive hunt for takedowns ended up costing him. As Andrews went to pick up and throw Alvey, Alvey hooked Andrews’s leg and ended up landing on top of Andrews. Andrews was dazed from the awkward landing, and Alvey took advantage of the situation to move to mount and finish Andrews with punches.

Sometimes one kick is all it takes. After two rounds in which he was likely edged on the scorecards by Richie Vaculik, Louis Smolka landed a sidekick to the head of Richie Vaculik in the third stanza that floored the Australian flyweight. Smolka followed Vaculik to the ground and threw a barrage of strikes to finish the fight.

In welterweight action, Chris Clements survived an early takedown and some strong clinch work from Vik Grujic to post the third consecutive first-round finish of the night. Clements connected with a knee as Grujic ducked down. The knee rocked Grujic, and Clements pursued the Australian fighter across the cage, connecting with more strikes until Grujic fell to the mat.

Daniel Kelly kept his unblemished record intact with a first-round finish of Luke Zachrich. The pair exchanged strikes for the first several minutes of round one. Kelly tripped Zachrich to the mat and eventually snagged one of Zachrich’s arms. Kelly cranked the kimura hold to coax the tapout from Zachrich.

In the opening fight of the night, Marcus Brimage announced his arrival in the bantamweight division with a highlight-reel finish of Jumabieke Tuerxun. Brimage connected with a head kick in the first round. Tuerxun immediately dropped to the canvas, and the referee stepped in to save the Chinese fighter as Brimage prepared to pounce. The end came just under three minutes into the fight.