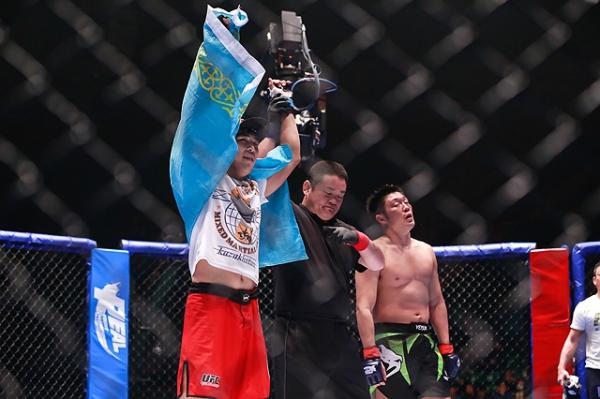 Out of Obscurity: Titan FC 51, Thunder Fight 18 and Island Fights 51

For its entire history, the Titan Fighting Championship promotion has never traveled beyond the boundaries of the United States. That all changes with the organization’s 51st event. Titan FC heads to the very unlikely locale of Kazakhstan for its latest show. The lineup features two title tilts, including a clash between Beibit Nazarov and Martin Brown for the lightweight title.

Nazarov is actually a significant factor in Titan’s decision to visit Kazakhstan. The 31-year-old is a popular fighter in his homeland, and now he gets an opportunity to increase his popularity and recognition with American fans. The American Top Team fighter has been competing at the professional level since 2008, when he debuted with a first-round finish of fellow rookie Chyngys Baitemirov. Nazarov eventually extended his winning streak to eight, all via stoppage, before finally suffering a setback in a 2013 fight with Eric Michael Fought. He rebounded with another four victories, including two more finishes. Then, he dropped a decision to UFC veteran Lipeng Zhang. It was nearly two years before Nazarov returned to action, but his next two outings, his first two fights for Titan FC, did end in his favor. Most recently, though, he suffered a submission loss to Rafael Alves in a catchweight affair at Titan FC 50.

Brown, a 34-year-old SHIFT MMA product, hasn’t exactly been tearing up the competition. He debuted in 2009 and managed a mediocre 2-2 record through his first four fights. His losses in this stretch came to Juan Zapata and JP Reese, both of whom now hold .500ish records. Brown finally strung together three victories after his loss to Reese, but the last of those wins came against an 0-18 opponent. He stumbled once more when he fought Thomas Gifford, easily the best fighter Brown had faced up to that point in his career. Following the submission loss to Gifford, Brown found his rhythm and rattled off six straight wins, including two under the Bellator banner and one in his Titan FC debut. He pushed Des Green to a majority decision in his sophomore appearance with the company, but he was more convincingly beaten on the scorecards by Raush Manfio in his next outing. His most recent bout came in the Battleground MMA promotion, where he decisioned Thomas Webb.

While Nazarov is popular in his native land, neither of these men are real world-beaters. Brown, in particular, has struggled against the toughest competition he’s faced. He did pick up the recent win over Webb, but Manfio, Green and Gifford all sent him home with a loss. He even struggled early in his career against low-level foes. Nazarov has fared slightly better, but his best victories came against Haotian Wu and Demarques Jackson.

Brown kept his fight close with Green, which is something. He’s not going to be a walkover for Nazarov. Yet, it’s difficult to trust Brown to outperform his opponent. Brown will be traveling outside of the United States for the first time in his pro career, and he’ll be in enemy territory against a crowd favorite. Nazarov has plenty of finishes on his resume, but this one might go the distance before he earns the victory.

The Christmas season can be a slow time of year for MMA in general, and it certainly translates to far fewer shows from the major regional promotions. However, this opens the door for us to take a look at fighters in smaller organizations. Case in point, light heavyweights Marcos Brigagão and Acácio dos Santos from Thunder Fight 18, a card that also features a women’s flyweight grand prix with Aline Sattelmayer, Daiane Torquato, Vanessa Barbosa and Joice Mara.

Dos Santos can’t claim any wins over UFC stars, but he now holds a victory over The Ultimate Fighter: Brazil 3 alum and UFC veteran Wagner Silva. However, “Pequeno” has fallen to such underwhelming competition as the 3-2 Flavio Magon and the embarrassingly bad 2-8 Daniel Chicão, who managed to submit dos Santos in just four minutes. The 27-year-old has been competing since 2013. He did post a recent victory over a 5-0 prospect, plus the recent win over Silva, whose record now sits at 7-6. Overall, the Guarulhos Fight Team product has six wins via strikes. He has been submitted twice.

Brigagão is the more intriguing prospect in this fight. “The Hawk” is just 22 years old, but he’s already had eight fights and remains undefeated. He made his pro debut in June 2017 with a submission win. Over the next six months, he accrued four more victories, all by first-round knockout. Brigagão has kept it rolling in 2018 with an additional knockout victory and two submission finishes. The Sagaz Lutas export’s list of victims includes Julio Cezar Santana, who was 15-6 heading into their fight. Unfortunately, the remainder of his opponents are either winless as pros or hover around the .500 mark.

Brigagão obviously needs more tests like the one he received against Santana. That fight, though, lasted just 55 seconds and proves that the youngster is capable of more than just picking off rookies. Dos Santos is roughly in the same tier as Santana, which makes this an interesting test.

Dos Santos has clobbered plenty of opponents with his strikes, so Brigagão might be discouraged from standing and trading with his fellow Brazilian. However, Brigagão would appear to hold a clear edge over dos Santos on the ground. Dos Santos has been submitted twice, and he has failed to force any tapouts of his own. Brigagão should focus on exposing his opponent’s grappling game en route to the submission finish.

The Christmas weekend certainly is short on major events, but UFC Fight Pass has hardcore fans covered when it comes to getting their weekly fix of MMA action. Beyond the aforementioned Titan FC card, the streaming service will also serve as the broadcasting host for the 51st show from Island Fights. The card features such notables as UFC veteran Chase Sherman and former Titan FC lightweight champion Sidney Outlaw, but the spotlight shines brightest on the lightweight championship duel between Mike Davis and Socrates Pierre.

Davis debuted in 2015, but he’s had an incredible number of fights fall through. This has led to his short six-fight resume. The debut performance from “Beast Boy” resulted in a third-round TKO stoppage of fellow rookie Richie Dehnz. Just over three months later, Davis returned with a first-round knockout of a sub-.500 opponent. It took nearly two years and three scrapped bouts before Davis fought again. However, this was also the beginning of a more regular schedule of fights for the 26-year-old. He added two more first-round knockouts and a second-round TKO to his record, all under the Island Fights banner. The streak was enough to punch his ticket to Dana White’s Tuesday Night Contender Series, where he was thrown to the wolves. Davis was paired with Sodiq Yusuff, who earned the decision win over Davis and went on to make a successful UFC debut with a first-round knockout of Suman Mokhtarian. Davis, meanwhile, was forced to return to his frequent home with Island Fights.

Pierre possesses more than double the pro experience of his foe. The Haitian-born, Florida-based fighter debuted in 2010 and won five of his first six bouts. Island Fights paired him with Brok Weaver in 2014, and Weaver won via submission. Pierre avenged the loss roughly 10 months later, but he was handed another setback by Elvin Leon Brito in his lone fight of 2015. Pierre reeled off three straight wins, all by strikes, but his streak came to an end when he was knocked out by Max Mustaki in early 2018. The veteran has since bounced back with a decision nod over Abraão Amorim.

Davis has been in action against a fighter whose UFC debut lasted just over two minutes and ended in victory. Davis went a full three rounds with that same man. It’s his only loss at any level in this sport. He also has a perfect mark through six amateur outings. His presence on DWTNCS, even in a losing effort, is acknowledgement that the big show considers him to be a legitimate prospect. Pierre, on the other hand, has failed to break out from the regional scene through 14 pro fights and only managed a 3-1 run as an ammy.

Pierre’s experience makes him a passable threat for an up-and-comer who needs to prove himself and not just pad his record. The 33-year-old Haitian has managed to put away multiple opponents with his fists and multiple others with submissions. However, he has also proven vulnerable to both strikes and submissions. Pierre has been tapped three times. Davis has made a habit of scoring knockouts as a pro, but he submitted several amateur opponents too.

Davis is going to find a stoppage in this outing. The only question is how he gets that finish. Given Pierre’s higher rate of submission losses, the odds favor Davis winning the fight on the ground.