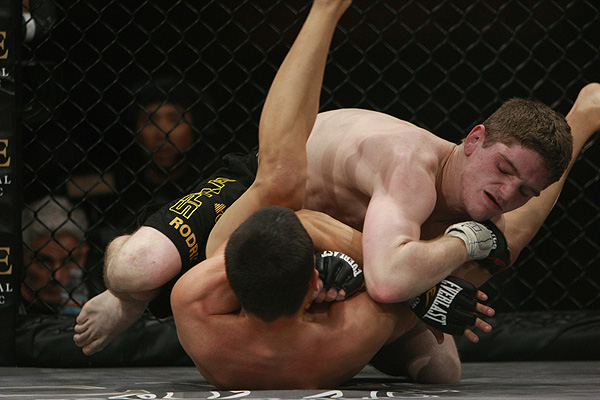 [Ed. Note — This feature originally appeared on Combat Press prior to the scheduled fight between Jimmy Flick and Cody Durden at UFC on ESPN 19. After its publication, the fight was rescheduled for UFC on ESPN+ 42. The article has been lightly edited here to account for the change in events.]

Here’s a word to the wise, do not end up on the ground with Jimmy “The Brick” Flick. The Oklahoma boy has scored most of his 15 professional victories there. The jiu-jitsu black belt has found plenty of success since his pro debut at Bellator 20 in 2010, but what he’s done in the madness of 2020 has been quite remarkable.

After a knockout loss to Ray Rodriguez in early 2019, Flick had an unusually long layoff. He was back in the cage against Jesse Bazzi in February, though, for the Freestyle Cage Fighting flyweight championship. Flick won by first-round submission. In July, he faced Greg Fischer for the vacant Legacy Fighting Alliance flyweight strap and picked up another sub only 38 seconds into the fight.

As everyone knows, an LFA title opens up a clear path to the UFC, which was his ultimate goal. So, five weeks after his date with Fischer, Flick was back in action on Dana White’s Contender Series, where he dominated the previously unbeaten Nate Smithen route to a third-round submission. He walked out of the UFC Apex that day with a freshly inked UFC contract.

“Oh man, it was great,” Flick told Combat Press. “[My] cardio was top notch. The environment was amazing, even with no fans. I went in there and did what I wanted to do. I even got the finish in the third round. I experienced everything I wanted to experience here at the Apex.”

The Contender Series contains one of the most stressful moments on TV. In nearly every other televised challenge, a win is a win, and that’s usually all that matters. However, on the Contender Series, a fighter can win and still walk away empty-handed. This is because UFC President Dana White has the final say on who joins the UFC roster. At the end of every show, the fighters gather on stools and listen to the UFC head as he decides their fate..

Flick sat on one of those stools. He hadn’t won by some first-round flash knockout, either. That’s just not his style. However, he also didn’t go the distance. He did need until the third round to get the finish, but he was attacking Smith the whole fight. His future was up in the air. Would White offer him a job?

“I wasn’t 100 percent sure, because I couldn’t see Dana White’s reaction,” said Flick. “I couldn’t hear what [UFC broadcast analyst] Daniel Cormier was saying or anything like that. So, I didn’t know what was going on in everybody’s head. I didn’t know what Dana White felt about a grappling match either, but it was pretty high-paced and I broke the record for the most submission attempts on the [Contender Series]. So, I was a little concerned, especially with all the contracts that have been handed out this year.

“When I heard my name, it was a dream come true.”

Flick has worked his butt off for over a decade to be the best fighter he could be, even while maintaining another job and supporting his wife and daughter. After the loss to Rodriguez, he added an additional component to his camp.

Flick has always trained under Thomas Longacre at Thunderkick Fitness, but he started training at Forza Combat Sports a little over a year ago as well with Coach Leo Perrucci. Smith possesses a wrestling background, so Flick brought in some high-level wrestlers, including a former Big 12 champion, to help him prepare for his Contender Series outing. Since joining the ranks of the UFC, he’s added yet another component: cross-training at Primate Brazilian Jiu-Jitsu.

About nine weeks ago, Flick learned the details of his UFC debut. He was set to be back in the cage at the UFC Apex on Dec. 5 for UFC on ESPN 19. The fight was later pushed back to UFC on ESPN+ 42 on Dec. 19 when Durden was unable to compete on the original date due to a medical issue. Flick is not accustomed to such a lengthy camp, so he eased into it to avoid burnout.

“It was longer than usual,” Flick explained. “We were already in the gym working on some things from that last fight that we saw we needed to work on. I’m always pushing my cardio as well in the gym, helping out the teammates. I had a little vacation with the wife in mid-October, so I was able to go enjoy that. As soon as we came back from that, that’s when we buckled down on a hard six-to-seven-week camp.”

On Saturday night, Flick meets Cody Durden, who just made his own promotional debut in August. Durden, who trains out of American Top Team in Atlanta, went to a draw against surging bantamweight Chris Gutierrez. Last year, Durden, who is now 11-2-1 as a pro, won a one-night tournament for Sparta Combat League in Colorado that consisted of a boxing match, followed by a kickboxing match, followed by an MMA fight. Durden, a wrestler, even showed some striking prowess.

“He likes to come forward,” Flick said of his upcoming opponent. “He likes to get the fight to the ground. He likes to ground-and-pound. He’s a well-rounded fighter. I know he hasn’t fought at 125 [pounds] ever. He’s had some catchweight fights. He’s weighed in at his lowest of 127 before, so I’m interested to see how that goes for him. This will be his first legit fight at flyweight, if he makes weight.

“I like everything about the match-up. I come forward. He comes forward. I like to choke people, and he likes to get people to the ground. I think it’s a great match-up, and I’m ready to go out there and show the world how good my ground game really is.”

When Flick isn’t helping out with his daughter’s remote learning or assisting his wife in getting her own nail salon off the ground, he is training and trying to keep the momentum going into his fourth fight of 2020. A year ago, he was just trying to get back in the win column. Now, he is making his UFC debut.

“Just look for a fast-paced fight,” said Flick. “I’m looking to go out there and get that 50k.”