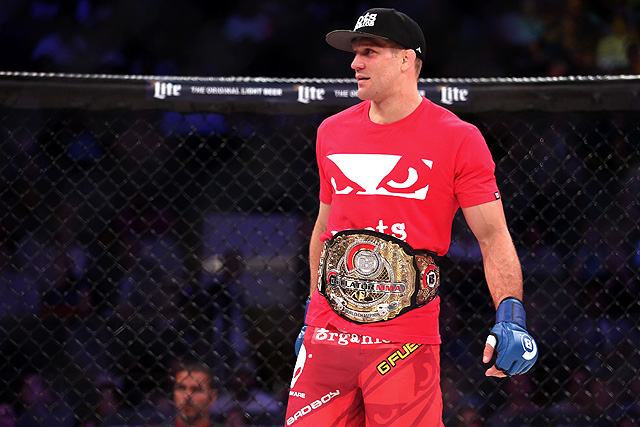 Bellator MMA takes a trip across the Atlantic to Birmingham, England, and the Resorts World Arena for Bellator’s second card in the European series.

The main event of the evening pits former Bellator lightweight champion Brent Primus against Tim Wilde. In his most recent outing, Primus dropped the Bellator lightweight belt to Michael Chandler, the same man he defeated to capture the belt in 2017. Wilde’s last fight came a year ago in April in a winning performance, via knockout, over Anthony Dizy to extend his current winning streak to three fights.

In the co-headliner, Bellator veteran Derek Campos takes on Pedro Carvalho at lightweight. Campos will try to snap a two-fight skid after getting beat by Sam Sicilia and Patricky “Pitbull” Freire in 2018. Meanwhile, Carvalho is out to extend his four-fight winning streak across the pond.

Two additional bouts round out the main card. The action starts at welterweight, where Wilker Barros takes on Raymond Daniels. Then, middleweights clash when Falco Neto squares off with undefeated British prospect Fabian Edwards.

The event airs live on the Bellator mobile app at 5 p.m. ET on May 4.

Headlining lightweight Brent Primus was a surprise champion after topping Michael Chandler in 2017, but he lost the belt back to Chandler in their rematch. Will he beat Tim Wilde and climb back to another title shot?

It likely wouldn’t lead to an immediate title shot, but Primus should win this fight. This is more or less a tune-up outing for Primus, who only has the one loss to Chandler on his record.

Primus actually won the belt on a technicality when Chandler hurt his ankle in the first round of their first fight. This isn’t exactly how anyone wants to win a belt, and the outcome was rectified in their next fight when Chandler reclaimed the gold.

It took Chandler two fights to get that rematch. Primus won’t get so lucky with just one win, but he is going to find success in this contest by bringing the fight to the ground. Primus has a Brazilian Jiu-Jitsu black belt, and he will look to utilize it as much as he can to coast to a victory. The 34-year-old opened his Bellator career with two submission wins in 2013, but he has failed to record another one since then. However, Wilde likes to go toe-to-toe with his opponent, which works into Primus’s game plan. Primus has also shown improved striking in his previous bouts, and he even hurt Chandler early in their first fight.

The biggest takeaway from this fight is that Primus needs to fight more often if he wants to take the next step in the sport. Three fights in three years is kind of rough, especially for someone with as much talent as Primus. Experience is key when it comes to improving facets of his game, including his striking.

Are there any other fights on the main card that deserve special attention from the fans?

It’s easy to sound like a broken record when Bellator has cards like this one. There really aren’t any other fights to single out in this lineup. If you’re a die-hard fan of the sport, you’ll want to watch every second of every card. Go nuts. Go crazy. However, to put it bluntly, this card is definitely on the weak side, teetering on unrecognizable. The people who don’t watch every waking second of the sport won’t find any huge draws here.

These cards are designed for live viewing purposes to help sell tickets and grow local talent. When the promotion heads to England, Italy or wherever, it’s to help scout the local talent. The company fills the lineup with guys from the region. That’s just how it works.

There are some good fights on the bill, though. Fabian Edwards is one to watch on the main card. Edwards has gone beyond the first round only twice in six fights. He remains undefeated, and five of his six victories have been finishes. He isn’t a household name — at least not yet — but the 26-year-old is definitely on the rise. His fight with Falco Neto is definitely a showcase for him.

Brian Moore and Son Le Binh. Moore has faced some of the best names in the lower weight classes, such as A.J. McKee Jr. and Daniel Weichel. He is a good fighter who will leave it all on the line against his opponent. Moore likes to look for the finish, and he has the ability to either submit or knock out his opponent.