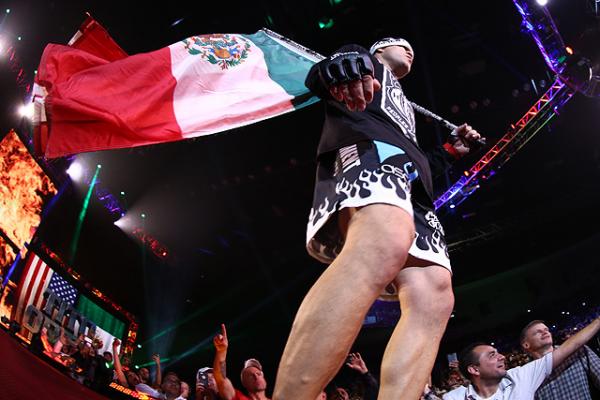 Love him or hate him, Tito Ortiz is still ever-present in the world of mixed martial arts

The former UFC light heavyweight champion rose to popularity after Zuffa purchased the UFC and rebranded the promotion. In rebranding the Ultimate Fighting Championship, Zuffa turned fighters like Ortiz, Ken Shamrock, Forrest Griffin and Chuck Liddell into some of the most recognizable faces in the sport. In 2006, Ortiz became the biggest pay-per-view draw and his fame grew through the mixed martial arts community. On July 7, 2012, at UFC 148, Ortiz faced Forrest Griffin for the third time in a retirement bout, losing a unanimous decision while earning “Fight of the Night” honors. He was inducted into the UFC Hall of Fame that night.

A year passed and the California native announced he would come out of retirement to fight for Bellator MMA and face fellow UFC veteran Quinton “Rampage” Jackson. However, an injury pushed his return to Bellator 129 in May 2014. He squared off against Bellator middleweight champion Alexander Shlemenko at the event and defeated the smaller fighter via a first-round arm-triangle choke submission.

The “Huntington Beach Bad Boy” returned to Bellator MMA against fellow veteran Stephan Bonnar at Bellator 131 on Nov. 15. They took part in the evening’s headlining affair which drew nearly 2 million viewers. While the fight itself was lackluster in nature, Ortiz’s win over Bonnar may be more significant than we realize.

First, the ratings don’t lie. Bellator 131 averaged 1.2 million viewers for the televised event. The number of viewers set a record for the promotion since its inauguration with Spike TV. Viewership increased significantly to 1.8 million during the headlining fight featuring two “pioneers” of the sport in Ortiz and Bonnar. The fight became the most watched and highest-rated fight on cable television in 2014. Ratings were especially important for Bellator 131, as it was the first event to go head-to-head with the World Series of Fighting on the NBC Sports Network and the UFC, who was holding its UFC 180 pay-per-view event.

Bellator CEO Scott Coker used a creative mix of MMA nostalgia to construct an alluring main event. While Ortiz was one of the largest pay-per-view draws years ago, it appears he can continue to draw a crowd.

While ratings were positive for Bellator, the light heavyweight rankings were an even bigger plus for the veteran victor. Ortiz is now comfortably positioned among the top 15 light heavyweights according to Fight Matrix. The top 15 is mostly comprised of athletes signed to the UFC, with Emanuel Newton (No. 10) and Quinton “Rampage” Jackson (No. 13) being the two exceptions. Newton and Rampage offer interesting match-ups for Ortiz, and if the “Bad Boy” is able to find success against the top-seeded light heavyweights in Bellator, his subsequent bouts will be interesting to watch.

A win over Bonnar also indicated that Ortiz still has serious earning power. He topped the Bellator 131 payroll at $300,000. Not only is this significant for Ortiz and his career moving forward, it is significant for other fighters as well. Ortiz’s salary suggests that if fighters can sell their fight, Coker will pay for their efforts. There is no question as to whether Ortiz or Bonnar hyped this grudge match, and their publicity paid off. UFC President Dana White was not surprised with the success of the main event, saying, “…of course it’s going to pull some numbers… both [are] big name guys.”

The “rebirth” of Bellator indicates the promotion is moving in a direction to not only compete with the UFC, but thrive against it. Although the show was driven by promotional hijinks reminiscent of professional wrestling, the strategy was successful. Bellator is certainly not the same as the UFC, but having big-name fights, drawing a bigger audience and broadcasting fights for free may just be part of Coker’s plan. It will be exciting to see what 2015 has to offer.