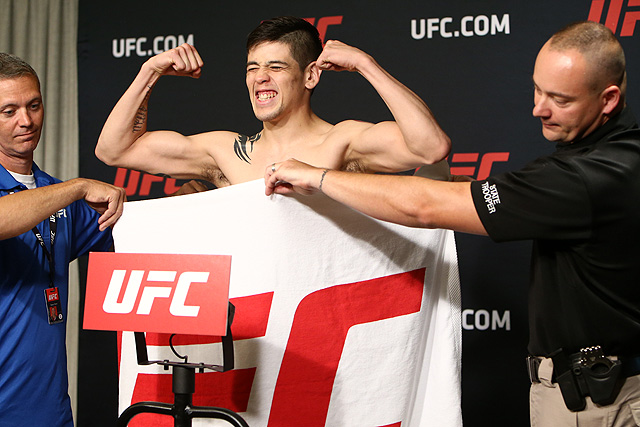 On Saturday, Dec. 12, the UFC will host UFC 256: Figueiredo vs. Moreno from the UFC Apex in Las Vegas. The event once again features no fans in attendance due to the COVID-19 pandemic.

In the night’s main event, flyweight champion Deiveson Figueiredo defends his belt his belt for the second time in three weeks, as he clashes with challenger Brandon Moreno. Both fighters were in action at UFC 255 on Nov. 21, with Figueiredo submitting Alex Perez in the first round and Moreno earning a TKO victory after Brandon Royval suffered a shoulder injury.

The event kicks off with a single bout streaming on ESPN+ at 7:30 p.m. ET. Four additional prelims follow at 8 p.m. ET on both ESPN+ and ESPN 2. The five-fight main card airs live on ESPN+ pay-per-view at 10 p.m. ET.

The fighters hit the scales on Friday, Dec. 11.