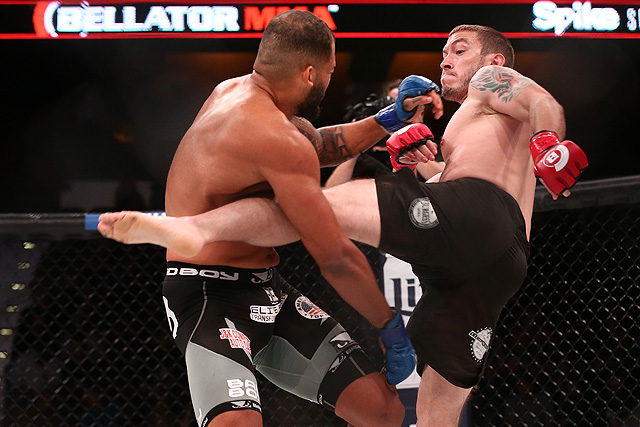 M-1 Global continues to put on cards in Russia, although it has notably abandoned the “M-1 Challenge” series for the time being. Its latest event includes a clash of welterweight prospects Ramazan Gasanov and Tahir Abdullaev.

Gasanov is undefeated in his pro career. He debuted in 2017 and has so far marched through five opponents. Four of his fights have ended in a stoppage. However, his biggest pro victory came on the scorecards against David Barkhudaryan, who held a 4-2 record at the time. Gasanov also has a couple of losses in bouts that do not count toward his official record. Those setbacks came against Ramazan Gamzatov and Abdulaziz Datsilaev, both of whom have far longer resumes than anyone on Gasanov’s list of victims.

Abdullaev has been competing at the pro level since 2015, when he debuted with an armbar finish of Azhybai Akylbekov. The “Tank” compiled a perfect mark through seven fights before making his M-1 debut against Roman Bogatov in a losing effort. Bogatov was able to secure an arm-triangle choke on Abdullaev in the second round of their fight. The Azerbaijani fighter has since rebounded with three finishes of his own, including two under the M-1 banner.

While Abdullaev did suffer a loss to Bogatov, he proved to be a scrappy fighter who could hold his own in the bout. Bogatov’s constant takedown attempts kept the Azerbaijani fighter on the defensive, but he’d often find ways to attack Bogatov on the mat from peculiar angles. He’s a proven finisher with both his fists and his grappling game.

This is Gasanov’s first venture onto the M-1 stage, and it could turn out to be a rough night for him. The Dagestani native was tapped in February by the 20-year-old longtime ammy success Datsilaev. At the pro level, even his most seasoned competition was a mediocre 4-2 opponent. Abdullaev marks a significant step up in competition, and the scrappy vet is sure to give Gasanov headaches wherever this fight goes. Eventually, Abdullaev might even coax a tapout from his inexperienced adversary.

The Legacy Fighting Alliance keeps delivering with strong fights at the top of its series of shows in South Dakota. Its latest effort includes a headlining bout featuring Chidi Njokuani, but the supporting middleweight contest between Kyle Stewart and Tim Caron could prove to be a more competitive match-up.

The 31-year-old Stewart is back in the LFA for the first time since a failed campaign in the UFC, where he suffered losses to Chance Rencountre and Erik Koch while fighting as a welterweight. Stewart’s road to the UFC included a solid 8-1 mark as an amateur, where his only stumble came when he met future UFC fighter Justin Jones. “Gunz Up” wasted no time upon making his pro debut in 2015. He posted six straight wins, including four first-round finishes and a decision win over UFC veteran Estevan Payan, before making his first LFA appearance in 2017. Over his next four fights, he continued his winning ways with a run that included an injury TKO stoppage over The Ultimate Fighter alum and former Titan FC welterweight champion Jason Jackson and the first blemish to be put on Jaleel Willis’s formerly perfect mark. Stewart, fighting out of Arizona Combat Sports at the time, finally suffered a setback at LFA 46 when he was handed a decision loss against James Nakashima. After a rebound victory in the LFA over Braden Smith, Stewart received the call from the UFC. Following his unsuccessful bid in the big show, Stewart returned to the regional circuit with a 40-second knockout of Mike Jones in February.

Caron, 33, is also out for redemption after experiencing mixed results in the big leagues. “The Bear” has made several appearances with Bellator MMA, where he has gone 3-2. His losses with the promotion came in key contests against Jordan Young and Vinicius de Jesus. Caron also made an appearance on Dana White’s Contender Series, but his fight with Jordan Williams ultimately ended up as a no-contest. The Burgess MMA disciple is coming off his biggest victory yet, a decision nod over fellow prospect Lucas Pimenta at Bellator 231.

These two men prefer to render the judges irrelevant. Caron has scored the stoppage in nine of his 10 victories. This includes six first-round finishes. Stewart is just as efficient. The UFC vet has ended seven fights in the first frame and eight overall. He also has a history as a finisher at the amateur level. Stewart, who now trains out of MMA Lab, is slightly more likely to go the distance — it has happened in six of his career outings — but he sure loves to hunt for the knockout.

Stewart has gone back to the drawing board after his failed attempt as a UFC welterweight. His starching of Jones marked his first-ever appearance as a 185-pounder, and now he’ll test himself further against Caron, who has spent his entire career at or above the middleweight limit. Despite Stewart’s history at a lighter weight, he’ll actually enjoy a three-inch reach advantage while only giving up an inch in height to Caron.

This contest should serve as a great appetizer for the main event. Stewart wastes little time out of the gates, and Caron is a strong finisher as well. It would be a surprise if this fight goes the distance. Stewart’s time in the UFC should provide him with the experience and confidence to overcome Caron. It might last longer than Stewart’s last fight, but the UFC vet should eventually find an opening and score the knockout.

There’s no better way to get noticed than to beat someone who has been in a major promotion or appeared on The Ultimate Fighter. Spain’s Jose Sanchez has just such an opportunity when he headlines this weekend’s Fight World Tour event in his homeland in a lightweight bout against TUF 27 featherweight finalist Jay Cucciniello.

Sanchez has maintained a spotless record since his 2016 pro debut. “Sasi” has scored four submissions and two knockouts over the span of 10 fights, but his biggest challenges have been fighters with records in the range of 5-2, 4-1 and 8-9. The Taz Lanzarote fighter even faced a rookie in his eighth pro appearance.

The 34-year-old Cucciniello hails from Britain and renewed his passion for MMA after a move to Spain. He made stops in South Africa’s EFC Worldwide, where he submitted Wesley Hawkey in the first round of their encounter, and the UFC, where he was eliminated from the competition in the quarterfinal round with a loss to Bryce Mitchell and re-entered the fray when Ricky Steele was forced out of the semis with a concussion. “The Mellow Fellow” defeated Tyler Diamond to advance to the finals, where he was outworked by Brad Katona at the live finale event. His subsequent fights — a bare-knuckle encounter with Robbie Peralta and an MMA contest against Jamall Emmers — have ended in disappointment.

Cucciniello, like Sanchez, victimized low-level opponents early in his career. Once tasked with aspiring UFC talent, the Brit recorded just one victory across two exhibition contests and one official fight. His struggles continued after TUF when he was knocked out within the first frame by Emmers, another top prospect.

The saving grace for Cucciniello is that Sanchez has not demonstrated that he can beat anyone who is even marginally a UFC-caliber fighter. While Cucciniello has not fared well in his own step up in competition, he has been fighting tough opponents through his last six outings, official and exhibition combined. He even went the distance against Katona and Mitchell. As long as the Brit isn’t outsized by too much, he should be able to score a finish against Sanchez, most likely via knockout.