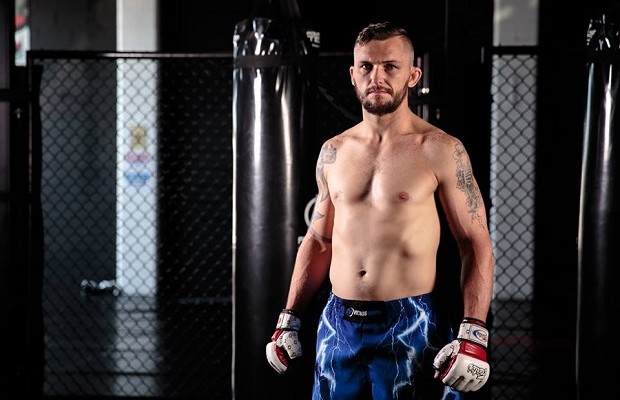 With a camouflage helmet on his head and a smile on his face, Damien Brown poses for a photo in front of the vast desert that lies before him. It’s a somber moment. Between the true stresses of combat, the camaraderie that is exhibited between soldiers fighting side-by-side in the trenches is unlike anything else on this earth.

It’s an unfortunate by-product of the world that we live in. In a perfect world, we would never have to go through it. The world is far from perfect. The brave men and women who fight for their country know what it’s like to stare down their greatest fears. They know all too well what it’s like to overcome adversity. Everything about warfare is a scary proposition. Even the thought of going home can cause more anxiety than being on the battlefield.

Damien Brown has fought for his country. Everything that he learned from his time in the armed services has made him a better person, a better man and, more pertinently, a better fighter.

“The Army helped me immensely with fighting,” Brown told Combat Press. “Not just with the structure, but also with my mentality. I honestly feel like the only person that can mentally break me is myself. There is not a fighter on this planet that can bash me into mental breakdown and to make me want to give up. I attribute that a little bit to my upbringing — I got raised in a split family, dad worked away for three weeks at a time and was only home for three days every three weeks and that kinda meant I was the man of the house. I always had that sense of responsibility, so maybe it’s a bit to do with that. But when I joined the army, they teach you how to survive. They train you to survive. I attribute a massive amount of my mentality to my military time. If I can go to war and come home, I’m sure I can shut a cage door and punch on. I know how to dig deep.”

The armed services may have shaped Brown and helped him to grow both physically and mentally, but it wasn’t always what he had planned for his life. In his first job after leaving school, hard work was somewhat of an expectation. The normal life of a teenager in the field that he had chosen wasn’t exactly in the cards.

“After Year 10, I left school and took up a trade as a baker and absolutely loved it,” Brown explained. “I worked various hours. I had starting times of like eight at night or 10 at night through to three in the morning or six in the morning, but I always did day shifts, which were like 10 till six. There’s so many different variations in that industry — I’ve worked every kind of shift that you could think of.

“Unfortunately, some of the people in the industry weren’t really my type of people, and a few things happened here and there and I just thought that I didn’t wanna work with people like [that] and I decided to move on. It just so happened that I opened up the newspaper and there was a full-page spread of the Army advertising for jobs. I gave them a call and then six weeks later I was at basic training. I’d spent six years before that working night shift — that was my first job out of school and I’d work 60 to 70 hours a week working night shift.

“I went from working night shift and never having like a week or two of holidays a year, to being on such a regiment. It’d be like six in the morning that they’d wake the entire platoon up and you’d march up to breakfast. You’d have breakfast, you’d march back down and you’d go through your structured day of basic training. You’d march up to lunch and march back. You ate at the exact same three times a day. You never got meals outside of that. Everything was structured. My entire life was structured.”

The road to the UFC has been a long one for Brown. At one point in his career, he went through five straight setbacks inside the cage. To make it to the UFC at that point was a mere dream. Persistence, hard work and winning fights in entertaining fashion got his career back to where it needed to be. It also made a dream come true for not only him, but also for one of his biggest supporters.

“My wife rang me up at work telling me who I had to call about the offer and stuff, and she hasn’t called me at work in three years,” Brown said. “As soon as she heard about it, she got straight onto it and from there she’s taken a couple of days off work to drive me around. And she let my UFC call-up overshadow her own promotion at work. So she’s a gem, that’s for sure. Without her, it’d be so much harder.

“For this to happen, that was a reward for her. It was sorta like a thank you for hanging around. That was nice to be able to give back to her in that sort of way. I think she was just as excited, if not more excited than what I was. I understand the opportunity, but I’ve been going to the gym all day and every day kinda thing, dreaming about it and fighting for it, and she’s been sitting at home supporting it. I think it’s even more exciting for her because it has finally happened and now everything that we’ve done will finally pay off.”

Leading up to the UFC’s upcoming event in Brown’s hometown, Brown had publicly offered his services many times if an injury were to take place. No fighter wants to see a peer lose their opportunity to fight due to being injured, but Brown knew all too well that injury can strike at any time. He wanted to make sure that the right people knew that he was available if he was needed. As the weeks dwindled down and the card remained mostly intact, Brown had succumbed to the realization that he wasn’t going to get the call-up.

“I 100 percent didn’t think it was gonna happen,” Brown admitted. “I ate pizza and garlic bread on Friday night. I honestly didn’t believe it was gonna happen. I just thought, ‘It’s the last week. It’s Friday night. Everybody has finished their training camps [and] nobody is gonna get injured.’ I sorta conceded to a point, but not training-wise, because I train 100 percent anyway — whenever I’m not working, I’m training, even when I don’t have a fight. I just went out and spoiled myself with the food, and never in a million years did I think that someone was gonna have visa issues. When they called me up, there was no doubt in my mind I could make the weight. Like, none at all. I’m ready to go.”

Even though he has signed on with the world’s biggest mixed martial arts brand, Brown isn’t getting ahead of himself. It’s one thing to be a professional fighter, but to dedicate his entire life to just fighting, that’s something that Brown isn’t quite ready to do. His stable job in the government is never going to go away, no matter how far his fighting career takes him.

“I’m never gonna leave my job,” Brown said. “It wouldn’t matter if I even became a UFC champion. I’d never leave it. There are so many options for me there with going casual or going permanent part-time or whatever. I’m a realistic person. I understand that two bad losses and they’re ripping up your contract. I know that. Everybody in the world has seen that. They know you’ve gotta go in there and you’ve gotta win. It doesn’t put any added pressure on me. I can only do my best. I know I’ve gotta have a job there, though, and I’ve gotta stay grounded, and I think that having a job and working is gonna help me do that and not let me get ahead of myself.”

Brown’s debut bout with the UFC takes place at UFC Fight Night 85, where he steps in to face Alan Patrick on late notice. Patrick is coming off a TKO loss at the hands of Mairbek Taisumov. It was Patrick’s first professional loss after winning 12 fights in a row.

“I don’t wanna give up too much on what I think he does, because I think that’ll give away a bit of my game plan. I mean, with seven days’ notice, I’ve gotta have something to take in there,” Brown said. “I know he’s gonna be tested when I go in there with him, and I think that he hasn’t done well in the past when he’s been really, properly tested. He beat [John] Makdessi, which was a good name to beat, but I think I’m gonna go in there and give him something he’s not expecting. I know what I can do in there, and I think the world is gonna get another good taste of the show that I can put on inside the cage.”