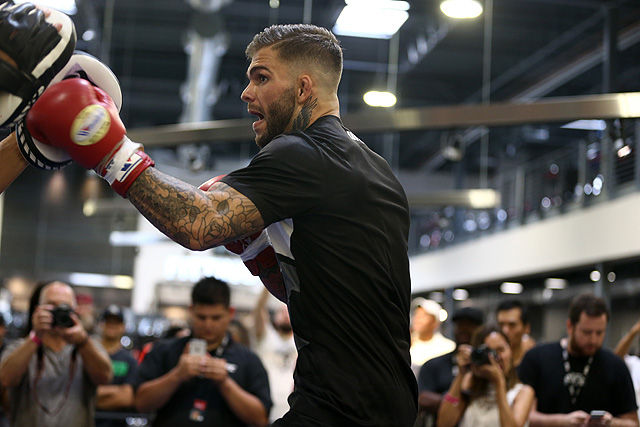 When UFC bantamweight fighter Cody Garbrandt was preparing to face Dominick Cruz, he made it clear that he envisioned himself beating Cruz when he was a teenager just beginning to work out at the gym. While “No Love” dreamed about beating Cruz, his uncle, Robert Meese, who became his striking coach, saw his nephew as the future champion the moment he stepped in the gym.

Growing up, Garbrandt was shown no love by his older brother who would get the best of him at times, but even when the sibling fight seemed over, Garbrandt made sure he would finish it off and get his redemption. It was during those times that his uncle knew he had the attitude to be a champion one day.

Garbrandt’s life growing up wasn’t easy. His father spent time in and out of prison, and so Garbrandt turned to his uncle, who not only got him involved in boxing, but became the father figure and role model that made Garbrandt the man he has become now. Meese told ChicagoLandSportsRadio.com host and Combat Press writer Mike Pendleton that he believes genetics certainly played a part in Garbrandt’s talent. Many generations of the family have been top-level fighters. In a family filled with fighters, Meese made it a point to take his nephew under his wing.

“They used to come watch me fight and it was just us spending time together,” Meese said. “We made it fun. I used to take him to the gym with me all the time. That was our past time together.”

As he went from unranked challenger to title contender in the calendar year of 2016, Garbrandt worked toward the dream that had been brewing since he first stepped into the gym. He ended the year getting the opportunity at UFC 207. Ronda Rousey drew all the attention and headlines, but Garbrandt was looking to become just the second person ever — the other being Garbrandt’s mentor and coach at Team Alpha Male, Urijah Faber — to defeat Cruz,.

There was plenty of tension leading up to the fight with Cruz. Team Alpha Male, led by Faber, has had a long-standing rivalry with the bantamweight standout. While many questioned Garbrandt’s lack of experience going up against the veteran Cruz, Meese wondered why anyone would overlook his nephew.

When he started his journey to the top, Garbrandt made it clear that he wanted to train at Team Alpha Male with Faber and the entire team. Well, when “No Love” wants something, he gets it. The champion’s uncle believes that when Garbrandt got to Team Alpha Male, he also got the best in his corner.

Throughout his championship performance against Cruz, Garbrandt was taunting, dancing and grooving his way to the title he imagined as a teenager.

“People don’t realize the struggle in the beginning when he was young,” said Meese. “Going through garages with no heat, training him how to throw punches — all that struggle disappeared as I watch him won the title. I have a nephew who’s a champion, and he beat a legend in the fashion in which he did.”

The performance not only secured the title, but it brought tears to the newly crowned champion, his uncle, his entire corner of coaches and his best friend, Maddux. The story of Maddux, a young cancer survivor who accompanied Garbrandt to the cage at UFC 207, was highly documented going into the fight. Garbrandt made a promise when he met Maddux that he would become champion if Maddux beat cancer. The young man beat cancer. Garbrandt had to keep his side of the deal.

“The compassion Cody has for Maddux has been there since day one,” said Meese. “He felt real bad when he lost in his amateur career competing for the title with the NAAFS, but he kept on to the dream. He got to really live the one thing he wanted to do and he accomplished it.”

So, what’s next for Garbrandt?

“I think it would be a money fight against Dillashaw,” said Meese. “The way he disrespected Cody and the way he said he embarrassed Cody… If he fights Cody, T.J. is going to get the same result or worse than what Dominick got.”

It took one calendar year for Garbrandt to go from unranked fighter to newly crowned bantamweight champion, but it was a jump that his uncle and his team saw coming. They believed in Garbrandt. The newly crowned champ was named “Fighter of the Year” or “Breakout Fighter of the Year” throughout several different media outlets, but the story and career of Garbrandt is just getting started.