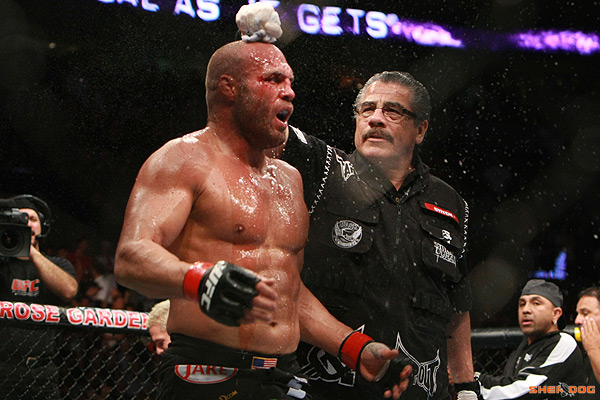 Courage of a Cutman: Will Stitch’s Stand Force the UFC to Change?

Adversity. It goes hand in hand with the UFC. Generally, the organization has to overcome a main event being scratched due to an injury, or it has to deflect questions on how little the fighters are getting paid. Another challenge is looking the UFC right in the eye.

Cutman Jacob “Stitch” Duran is somebody we associate with the Octagon in the same manner as ring announcer Bruce Buffer, analysts Mike Goldberg and Joe Rogan, and many of the other familiar faces we’ve grown to know over the years. Over the last couple of weeks, Duran has been quoted on the topic of the non-existent sponsorship money the cutmen get from Reebok.

Reebok’s apparel agreement with the UFC provides compensation for fighters based on a scale. Essentially, the scale goes from $2,500 per fight for those making their first through fifth appearances for the UFC (counting appearances with other Zuffa-owned promotions as well), all the way up to $40,000 for the champion. This also means, of course, that all the fighters had to get rid of their fight-night sponsors.

The overwhelming response from fans has been negative. Part of the spirit of MMA revolves around all the different logos on banners and shorts. Now we are left with fighters wearing bland uniforms and their cornermen looking like Stormtroopers.

One of the most appalling aspects of the deal is that there was no foresight to what was going to happen when the cutmen, such as Stitch, were forced to get rid of their sponsors too. This flew under the radar until Stitch brought it to the forefront in his recent interview. He had to bring it up because people assumed the cutmen were getting some sort of compensation from Reebok since they, too, had gone from uniforms covered in sponsors to wearing a generic Reebok vest. These cutmen are independent contractors of the UFC. How could they be forced to give up their income from sponsors if they weren’t being compensated somehow by Reebok?

Who knows, but that’s exactly what has happened. It’s very disappointing, especially from a company like the UFC, but are we really surprised? There seems to be a headache around each corner for the promotion, and often times it’s hard to decipher the truth from something being overblown, but Stitch seems to have nailed this on the head.

Shortly after Stitch stated facts about the Reebok deal to media outlet Bloody Elbow, he was informed that he would not be working anymore UFC events. Considering the actions of some fighters and even UFC President Dana White, who face no repercussions, it is a complete disappointment the way Stitch was let go. Somebody who has been with the company for so many years should have at least been called in to discuss the matter with White and/or Lorenzo Fertitta. The whole situation was handled inappropriately by the UFC.

Media, some fighters and some cutmen have publicly backed Stitch, but it’s the overwhelming support of the fans that some believe may help Stitch’s actions pave the way for a better UFC. Fans have expressed their intent to cancel their UFC Fight Pass subscriptions and boycott pay-per-view events. They have flooded White’s Twitter account with their passionate opinions about the greedy company the UFC has become.

Most companies go into damage-control mode. After all, the customer should be the top priority. Instead of coming out and making a statement on Stitch’s firing, White spent the next night following Stitch’s firing by completely trolling his Twitter followers. It was reminiscent of things you’d hear a bully tell a fellow fifth-grader. This, too, has caught like wildfire. It appears at this moment that the approval rating for the UFC (if there was such a thing) would be very low.

What will come from all of this? Ideally, Reebok would be proactive and contact the UFC to work out a compensation package with their independent contractors (read: cutmen) so that they, too, would receive sponsorship money. It would put Reebok, which has taken plenty of flak for various aspects of its UFC deal, in a very positive light. The UFC would look good, too. And Stitch and the rest of the cutmen wouldn’t be out of the dollars they lost when they slipped on the Reebok vests.

The chances of this happening? In the immediate future, not good. The UFC is too stubborn, and Reebok, which has already begun to distance itself from Stitch’s dismissal, is that sympathetic to the situation to spearhead such a campaign.

Stitch was fired just a few days ago by the UFC, so one has to wonder if anything is really going to change. As we head into the weekend with a nice card being televised on “big” Fox, how soon will fans forget their animosity while throwing back wings and beers and talking about their plans for the following weekend when Ronda Rousey fights? Another week will then pass and all the talk will shift to Rousey. How many fans, outside of the hardcore base, will even notice Stitch isn’t cageside?

How many fans are really canceling their Fight Pass subscription?

How many fans are really going to boycott the UFC because of this situation?

Ultimately, it’s not going to make a dent in anything. The UFC is thriving, and although the people who immerse themselves in this sport are concerned about fighter pay and the perceived bad sponsorship deal, the majority of the people who tune in on Fox and buy the pay-per-views don’t care. They want to see a fight. What do they care about how much the fighters make? They don’t care who is cleaning up the faces of the fighters — to them, a cutman is a cutman. And the UFC knows this.

This past week has either been one of two things for the UFC. It could be one of the biggest nosedives the organization has taken in the eyes of public opinion. On the other hand, it could be the most successful, albeit convoluted, marketing strategies in the company’s history.

Stitch deserved better. He really did. It was great to see so many people come to his side over social media, but those people will start to fade away over the coming weeks. Eventually, it’ll be something we look back on as just another obstacle the UFC had to overcome as the company continued its growth.

Stitch will be fine. The best guess is that he will increase his boxing workload and, if he opts to keep working MMA fights, he’ll either end up with Bellator or maybe we’ll see him eventually back at a UFC event when cooler heads prevail and something gets worked out for cutmen to earn sponsorship money. Perhaps Stitch’s firing won’t be all for naught.